With sluggish offense, Royals turn to pitching, defense against Rays 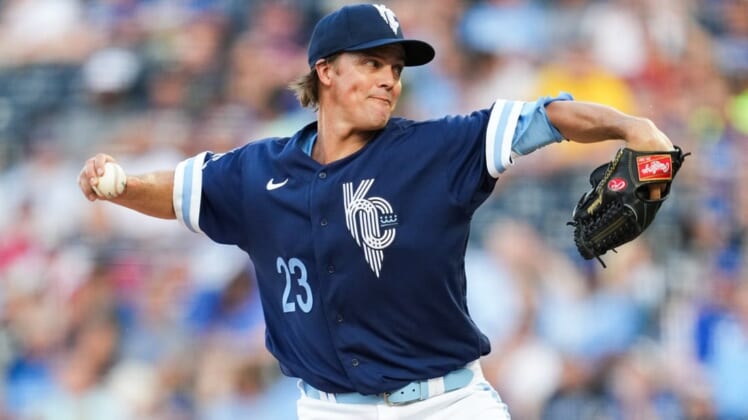 Looking to split their four-game series with the Tampa Bay Rays on Sunday afternoon, the Kansas City Royals and manager Mike Matheny will rely on a pitcher with vast experience.

Zack Greinke, a 19-year major league veteran, is slated to make his 21st start of 2022 in the game in St. Petersburg, Fla., just two hours from his hometown of Apopka, where he became a first-round selection by the Royals (sixth overall) in 2002.

Greinke (4-8, 4.13 ERA) pitched the first seven seasons of his career with the Royals, then pitched for five other teams before rejoining the Kansas City staff this season.

The Royals have dropped two of the first three games of this series, but their victory — 3-2 in 10 innings on Friday — came with the kind of baseball Matheny would like to see his young club play the rest of the way in a season that has not been good for the 2015 World Series champions.

Improving the pitching and defense would help.

The Royals rank 27th in team ERA (4.66) and tied for 16th in fielding percentage (.985). But Friday’s victory was keyed by excellent efforts in both areas.

Though struggling with command, fellow Floridian Brady Singer kept the Rays at bay over six solid innings (two earned runs), and the defense was stellar all night.

Singer picked off Harold Ramirez to end the third inning, while MJ Melendez threw out Taylor Walls trying to take an extra base on a hit in the ninth with the game tied at 2.

In the 10th inning and the Royals 3-2, catcher Salvador Perez caught Roman Quinn attempting to steal third with one out, and Melendez finished the game with a sprawling grab in left field.

“You let athletes be athletes,” Matheny said of Melendez, a catcher who is learning the outfield. “You allow him to use his instincts. Great throw, and then to end the game like that. He’s fearless.”

However, Tampa Bay also has done a fine job of pitching in the series — the major reason they hold a 2-1 advantage.

Rays’ hurlers have held the American League Central opposition to 14 hits in 95 at-bats this season — a .147 average. — with 10 of them being singles. The Royals have scored only six times in the three games.

Drew Rasmussen (5 1/3 hitless innings) and three relievers did the damage in Saturday’s 5-2 Tampa Bay win. The Rays also were encouraged by offensive contributions from Yandy Diaz and Manuel Margot.

The team’s leadoff hitter, Diaz went 2-for-3 with a double and drove in a run, giving him nine RBIs in his past six games.

Margot returned to the lineup after missing two months with a strained patellar tendon and went 1-for-4, slashing the fourth pitch he saw back through the box for a single.

“Certainly nice to have him back, had good at-bats, good swings,” Rays manager Kevin Cash said. “He certainly looked like the same guy. He looked like he was really on time.”

The Rays are expected to start Ryan Yarbrough (1-7, 4.75) on Sunday. The left-hander is 2-1 with a 5.30 ERA in four career appearances (one start) against Kansas City.