With Senators coming to town, Predators have history on their side 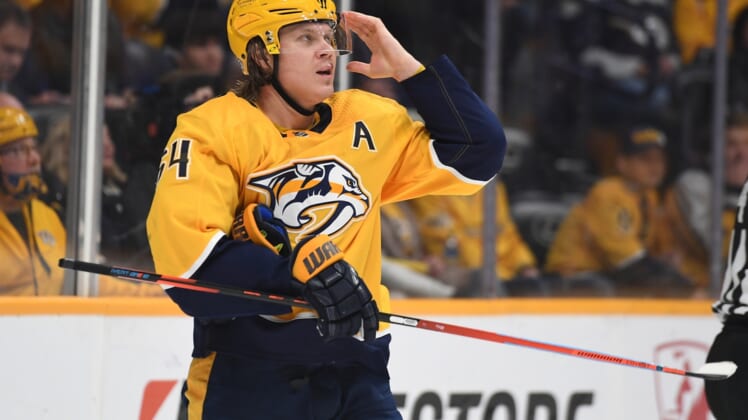 Considering their recent home success over the Ottawa Senators, the Nashville Predators might have a good opportunity to build on a much-needed victory over the weekend.

Meeting for the first time in more than two years, the Predators aim for a seventh consecutive home win over the Senators on Tuesday night.

At the moment, Nashville owns a playoff spot in the Western Conference. Though the Predators have won eight of the last 12, they avoided a third consecutive defeat by rallying from a pair of two-goal deficits to beat Philadelphia 5-4 on Sunday.

Tanner Jeannot had two assists and scored the tie-breaking goal in the final two minutes of regulation while Yakov Trenin scored twice for Nashville, which has won three in a row at home and scored 23 goals over the last five games in its own building.

“It wasn’t so much that (Sunday) was a must-win game, but this was a must-get-back-to-our-identity game,” said Jeannot, who is third on the team with 22 goals in his first full NHL season.

“It was a great response game (after losing two in a row) for us. We got back to our identity. How we want to play. … That’s what we want to keep doing. We want to keep building on it and keep getting wins.”

Winning at least back-to-back contests seems entirely possible even though the Predators have not faced Ottawa since a 3-2 home victory on Feb. 25, 2020. Nashville has won six consecutive home games against the Senators, whose last victory there came 2-1 in a shootout on Jan. 11, 2014.

These Senators, however, won their most recent road contest, 5-2 at Winnipeg on Thursday. They followed that with a 4-3 home shootout defeat to Florida on Saturday. Ottawa is 4-10-1 since Feb. 26.

Anton Forsberg, who stopped 46 shots in the defeat to the Panthers, has been one of Ottawa’s consistent performers during another disappointing season for a club that has the second-fewest points in the East. His 15 wins and 2.72 goals-against average are both personal bests, and Forsberg could match a career high with his 35th appearance on Tuesday.

“(Forsberg) works harder than anybody, and when you get your opportunity, you’re ready,” Ottawa coach D.J. Smith said.

“Our guys play for him. He just fits.”

Backup Filip Gustavsson, whose last start came on March 19, has a 4.45 goals-against average during an eight-game losing streak.

Meanwhile, Nashville’s Juuse Saros ranks among the NHL leaders in starts (55) and wins (32) but has a 4.24 goals-against average even while winning three of his last five games. Teammate David Rittich (3.24 GAA) has made just nine starts this season, most recently on March 22.

Trenin has recorded four goals and an assist in the Predators’ last three home games. Jeannot, meanwhile, has a goal in three consecutive home contests.

Ottawa’s Brady Tkachuk has a team- and career-high 46 points this season, but posted a singular two-goal game at Winnipeg for his only points in his last six contests. He has two goals with an assist in four career games versus Nashville.