With Seahawks up next, Cardinals know they need to make move now 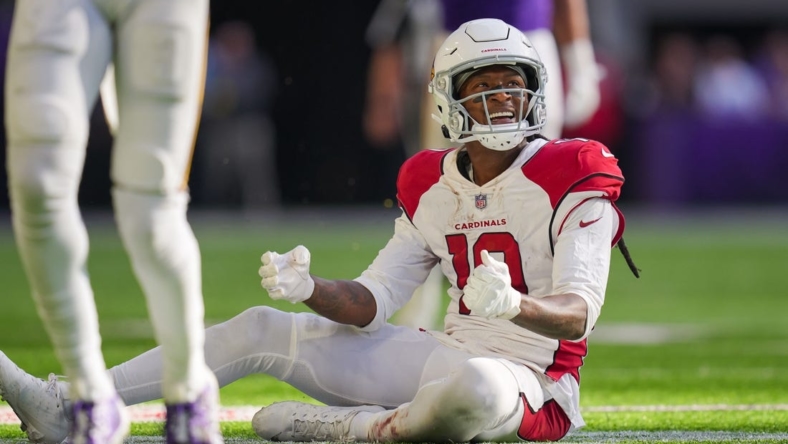 If the Arizona Cardinals are to make a move in the NFC West this season, now would be the time to do it.

The last-place Cardinals (3-5) will host the division-leading Seattle Seahawks (5-3) on Sunday, followed by games against the Los Angeles Rams and San Francisco 49ers.

“Obviously, not a lot of wiggle room left, with three division games and where we’re at record-wise,” Cardinals coach Kliff Kingsbury said. “If you are able to win all three, there’s an opportunity to be right there and have a piece of first place at the end of this deal. Our guys understand that after starting the way we did, that’s a great carrot out in front of you.”

The return of receiver DeAndre Hopkins from a six-game suspension for violating the NFL’s policy against performance-enhancing drugs has sparked Arizona’s offense — he had 12 catches for 159 yards and a touchdown last week — but Kyler Murray threw two costly second-half interceptions in a 34-26 loss at Minnesota. Murray passed for 326 yards and a season-high three touchdowns.

“We’ve got to go back to the drawing board and practice better,” Hopkins said. “You guys see that we are right there and not getting blown out. This was one of the best teams in the NFL, and we had a chance to win.”

The Cardinals and Seahawks met three weeks ago in Seattle, with the hosts prevailing 19-9. Arizona’s lone touchdown came when its special teams fell on a fumble by Seahawks punter Michael Dickson in the end zone.

That was the beginning of a renaissance for Seattle’s then-No. 32 ranked defense. The Seahawks allowed one touchdown in last week’s 27-13 victory against the visiting New York Giants — on a 2-yard drive after a lost fumble.

“Confidence and swagger,” veteran linebacker Bruce Irvin said of Seattle’s defensive turnaround. “Guys are finally believing in themselves, are believing in one another, and if we have a messed-up play, we don’t dwell on it, we move on to the next play.”

After trading away Russell Wilson in the offseason, most prognosticators figured it would be the Seahawks in last place midway through the season, not first.

“I hate that we were crappy early in the year and we weren’t doing stuff right, but we held on to it and we knew — we felt like we knew where we could go, and we’re getting going,” Seahawks coach Pete Carroll said. “All the people that doubt — we run the ball too much, you don’t understand football and he can’t stay up with the new game and all that kind of stuff — that’s a bunch of crap, I’m telling you.

“We’re doing fine. We’re all right. I don’t mind proving it day in and day out.”

The Seahawks, who are 7-1-1 in their past nine games at Arizona, are relatively healthy. Only wide receiver Marquise Goodwin and outside linebacker Darrell Taylor missed practice, both with groin injuries.