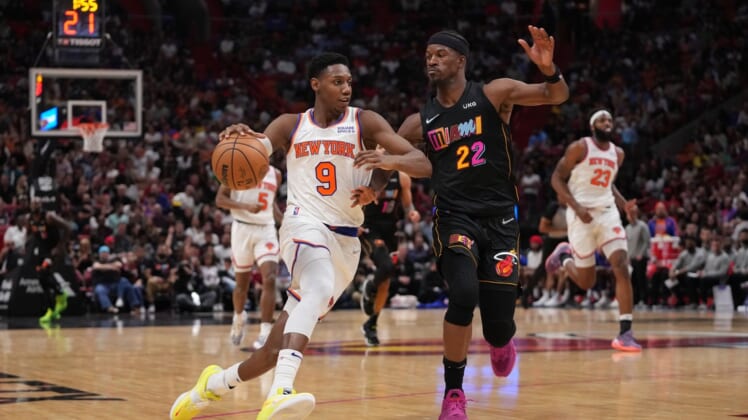 A last-second steal Sunday afternoon by Alec Burks ensured the New York Knicks wouldn’t suffer an agonizing loss that would have extinguished what remains of their flickering playoff hopes.

The reward for Burks and the Knicks? The right to play another must-win game barely 24 hours later.

The Knicks will look to remain on the fringes of the Eastern Conference play-in race Monday night when they are slated to host the Chicago Bulls in the final regular-season meeting between the rivals.

The Knicks (33-42) built a 21-point lead by the second quarter Sunday before hanging on to edge the host Detroit Pistons, 104-102. The visiting Bulls frittered away most of an 18-point lead at halftime Saturday but held off the Cleveland Cavaliers, 98-94.

The Knicks’ win capped a perfect three-game road trip. They appeared headed for an easy win when they carried a 12-point lead into halftime against the Pistons, who are 20-55 and tied for the worst record in the NBA with the Orlando Magic and Houston Rockets.

But the Pistons twice tied the game in the fourth quarter and nearly overcame a seven-point deficit in the final three minutes.

Burks, whose 3-pointer with 45.4 seconds left provided the Knicks’ final points, secured the win when he blocked a shot by Detroit rookie Cade Cunningham, who tried to drive from the top of the key with three seconds left.

The Knicks have won eight of their last 12 games following a seven-game losing streak. New York is 4 1/2 games behind the Atlanta Hawks (37-37) in the race for 10th place in the Eastern Conference and the final spot in the play-in tournament. Atlanta is scheduled to visit the Indiana Pacers on Monday night.

“We had a couple tough losses,” Knicks guard RJ Barrett said, referring to back-to-back home games to the Utah Jazz and Hawks from on March 20 and 22. “But we were playing very well, so this was a huge road trip, and (now they’ll) just try to see if we can continue our success at home.”

The Bulls (43-31) are hoping the win over the Cavaliers serves as a turning point after a difficult four-week period.

Chicago, which spent most of the first half of the season vying for first place in the Eastern Conference, has lost 10 of its last 14 games to fall into fifth place in the East, three games behind the fourth-place Philadelphia 76ers and just two games ahead of the Cavaliers, who are in seventh place.

Only the top six teams in each conference are assured a playoff berth.

Even a late comeback attempt by the Cavaliers — the hosts drew within three points in the fourth quarter — couldn’t diminish one of the best defensive games of the calendar year for the Bulls. They allowed their fewest points since a 101-91 win over Cleveland on March 12 and held an opponent under 100 points for just the sixth time in 41 games since Jan. 1.

“I think we have to use these last eight games to really work on things we haven’t been doing well to play well and build up our confidence going into the playoffs,” said Bulls center Nikola Vucevic, who scored 16 points Saturday. “Whoever we play, we’re going to have to get ready.”