With Philip Rivers, Colts have pieces to challenge Chiefs in AFC 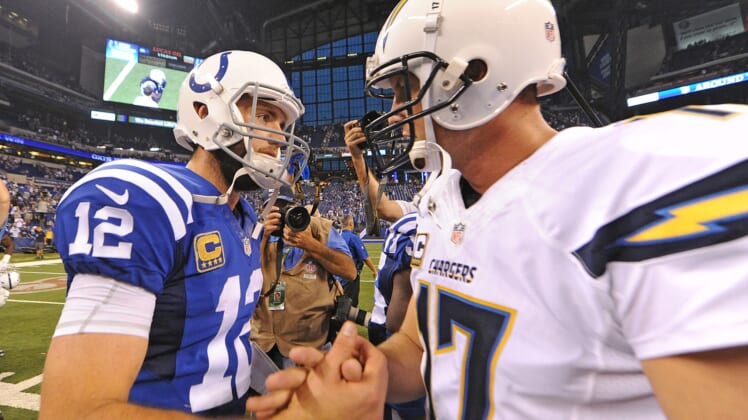 The Indianapolis Colts reportedly landed Philip Rivers in free agency. It’s a move that sets themselves up to challenge the Kansas City Chiefs in 2020.

The skinny: Despite a down year in 2019 with the Los Angeles Chargers, Rivers is still one of the most dangerous gunslingers in the NFL. He now joins a team that has all the other ingredients to challenge the Chiefs in the AFC and to make a Super Bowl run.

It’s important to note that Rivers was in a horrible situation the past few seasons with the Chargers — an organization that lost the support of its fan base with a dumb move to Los Angeles, which has not embraced the team at all. Now he’s landing in a place where the fan base is as rabid as any in the NFL, and the Colts have a roster loaded with talent from top to bottom.

The offense just needed a QB: The Colts have a dominant run game that’s spearheaded by the best offensive guard in the NFL. They also have talented receivers, a nice stable of running backs who can catch the ball, and a coach that is known for his offensive mind.

It all starts with the big guys up front: The Colts’ offensive line is better than the one Rivers played with last year in Los Angeles.

Skills to pay the bills: Indy has a bunch of talent at receiver and running back, and much of it meshes well with what Rivers does best — push the ball downfield.

The offense is clearly going to be a force in 2020 with Rivers pulling the trigger under center. Putting up points won’t be an issue. This is especially true given the fact that the veteran will be reuniting with Colts head coach Frank Reich and Nick Sirianni, Indy’s offensive coordinator, who both coached him during their tenures with the Chargers.

Getting defensive: The Colts made one of the biggest moves of the offseason Monday when they traded their first-round pick to the San Francisco 49ers for All-Pro defensive tackle DeForest Buckner. This move gave Indy an incredible weapon that immediately helps them when it comes to taking on Patrick Mahomes and the dangerous Chiefs offense.

The bottom line: The Chiefs are clearly the class of the AFC. That’s going to be the case as long as Patrick Mahomes can stay healthy. But the moves the Colts have made this offseason give them a legitimate shot to challenge the NFL’s reigning MVP for the right to play in Super Bowl LV next February.

Rivers is the biggest key to all of that. Provided he can rebound from his turnover-prone 2019 campaign — something we’re confident he will do playing for Reich again — Rivers will have the Colts contending for a title in 2020.