With or without Candace Parker, Sky have plenty of options vs. Fever 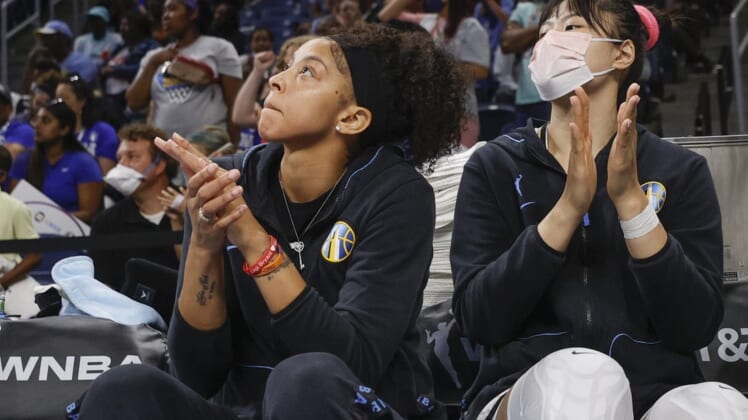 At 10-4 with wins in six of their last seven games, the Chicago Sky look to keep rolling on Sunday when they visit Indianapolis for an Eastern Conference clash with the Indiana Fever.

Friday night’s 106-100 overtime win over the visiting Atlanta Dream may have been too suspenseful for the taste of Sky coach James Wade, but he likes how the defending WNBA champs are progressing.

“The chemistry’s building,” he said. “More time together, players getting comfortable, communication’s building. And just a consistent buy-in of your leaders.”

The Sky displayed excellent balance against Atlanta, putting six players in double figures. Kahleah Copper led the way with a game-high 23 points, while Emma Meesseman and Allie Quigley each scored 17.

Chicago canned a season-high 14 of 25 3-pointers while playing without center Candace Parker (knee). Her status for Sunday’s game isn’t known, and her 12.4 points, 7.9 rebounds and 4.5 assists are a lot to leave out of the lineup.

Chicago still has plenty of scoring options. Copper tallies a team-high 13.7 ppg, while Meesseman contributes 13.1 and Courtney Vandersloot hits for 11.1 while dishing out 7.0 assists.

As for the Fever (4-13), they’re coming off a 93-80 home loss Wednesday against Phoenix. A slow start was deadly, as the Mercury established a 53-36 halftime lead and then held off a mild second-half run.

Indiana got 26 points from Kelsey Mitchell, who’s leading the team in scoring at 19.2. Rookie NaLyssa Smith chips in 12.9 points and 8.7 rebounds, although she was held to four points on 1 of 7 shooting in 30 minutes on Wednesday.

This will be the teams’ second meeting this year. The Sky took a 95-90 win on May 24 in Chicago, rallying from a halftime deficit.

The Sky can clinch a spot in the Commissioner’s Cup game this summer with a win on Sunday.