With No. 1 seed assured, Heat wraps up vs. Magic 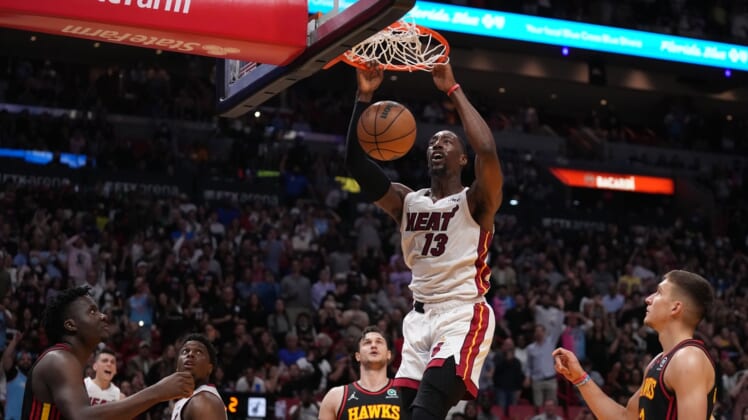 Sunday marks the 135th overall meeting between Sunshine State rivals Miami and Orlando, as the Heat and Magic conclude their 2021-22 regular-season schedules in Orlando.

Miami (53-28) showed its resilience on the way to the Southeast Division title and the No. 1 seed for the Eastern Conference playoffs.

The Heat ride a six-game winning streak into the regular-season finale. Head coach Erik Spoelstra cleared the league’s health and safety protocols and was back for Miami’s 113-109 home victory over Atlanta on Friday as Bam Adebayo scored 24 points, including a tiebreaking dunk with 27.1 seconds left.

The Heat, who shot 55.6 percent from the field (40-for-72) and 42.3 percent behind the arc (11-for-26), played without P.J. Tucker (right calf strain) and Omer Yurtseven (non-COVID illness). But Gabe Vincent, Caleb Martin, and Dewayne Dedmon were all available coming off the injured list.

Spoelstra was asked before Friday’s game about the possibility of resting players prior to the postseason. Against the Hawks, four players (Jimmy Butler, Kyle Lowry, Tyler Herro and Adebayo) played 30-plus minutes.

“It’s a little bit unusual because of the play-in (tournament) that we’ll have a little bit more time off,” Spoelstra said. “Everybody wanted to compete (against Atlanta). We won’t play our first playoff game until the 17th (of April) or whenever, but this is an opportunity to continue to compete and stay sharp.”

The Heat own a five-game winning streak against Orlando — including all three previous matchups this season. They lead the all-time regular-season series 73-56, and won a best-of-five playoff series in 1997, 3-2.

Orlando (21-60) finishes at the bottom of the East, although the Magic showed improvement late in the campaign under first-year head coach Jamahl Mosley. Orlando is 8-13 since the All-Star break.

The majority of NBA teams dealt with injuries and COVID-19 issues this season, but the Magic were hit particularly hard. On Dec. 17, Miami won 115-105 in Orlando as the Magic signed four players to 10-day contracts that day after losing five players to health and safety protocols.

Overall, the Magic had 25 different starting lineups in 81 games. The most promising group — big men Wendell Carter Jr. and Mo Bamba, guard Cole Anthony and rookies Franz Wagner and Jalen Suggs — made 34 starts with Orlando going 13-21 (.382) in those games.

Bamba suffered a sprained right ankle in the first quarter at Charlotte, two days after he helped lead a 120-115 win over Cleveland en route to becoming the sixth player in NBA history with five or more 3-pointers and six or more blocked shots in a single game.

Markelle Fultz and Moe Wagner both made their second starts of the season on Thursday in a 128-101 loss at Charlotte.

Suggs sat out 10 games due to a bone bruise in his right ankle, but he returned to play 18 minutes against Cleveland and 16 versus Charlotte.

“Well, you know, the thing about Jalen is that he’s a tough kid,” Mosley said. “He’s going to continue to push and work no matter what, but, again, part of the in and out was the fact that he’s on the minutes restriction … the safety and the health of our guys is the most important thing.”