With lead dwindling, Yankees look to hold off Rays 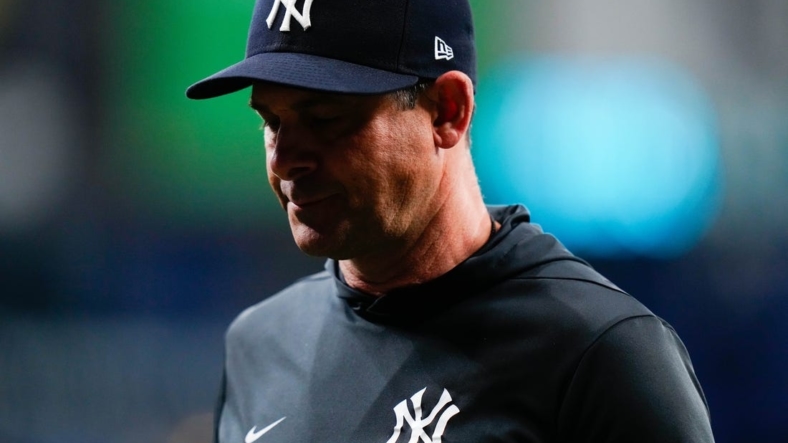 Seven weeks ago, the New York Yankees were drawing comparisons to their 114-win 1998 team.

Now the Yankees are enduring a collapse and possibly inching closer to hearing comparisons to teams such as the 1978 Boston Red Sox, who blew a 14-game lead and the 1951 Brooklyn Dodgers, who squandered a 13-game lead.

New York will attempt to turn the tide and beat the Tampa Bay Rays when the American League East foes conclude a three-game series Sunday afternoon in St. Petersburg, Fla.

The lead is down to four games after Aaron Judge’s 52nd homer in the ninth inning accounted for New York’s only run in Saturday’s 2-1 loss, which followed a 9-0 loss Friday that manager Aaron Boone described as “embarrassing.”

“It’s time to roll,” New York designated hitter Giancarlo Stanton said. “We know where it’s at; we have to keep pushing and get tomorrow.”

It marked New York’s sixth loss in seven games since its five-game winning streak in the wake of manager Boone slamming his right hand on the interview room table following a 5-2 loss to Toronto on Aug. 20.

“We have the people to do it,” Boone said. “If we don’t dig ourselves out, you’ll have a great story to write. We’re going to find out what we’re made of. All the noise, a lot of people out there really mad. What’s our response?”

Like the 1951 New York Giants and 1978 Yankees, the Rays are pulling off a late-season surge. They have outscored foes 32-8 during a five-game winning streak and are 20-8 since Aug. 3.

Yandy Diaz’s two-run single in the third inning accounted for Tampa Bay’s runs and Stanton was thrown out as he attempted to advance to second in the first.

The Rays are 4-1 in the past five meetings with the Yankees and are within four games for the first time since May 11. They last were within three games on May 9.

“I think we always knew we had a shot,” Tampa Bay shortstop Taylor Walls said. “Nothing’s given, though. They’re still four games ahead. We can’t look too far ahead.”

Frankie Montas (4-11, 3.94 ERA) will make his sixth start since being obtained from Oakland at the trade deadline. He is 0-2 with a 7.01 ERA with the Yankees and has allowed at least four runs in three starts so far, including Tuesday’s 4-3 loss to the Los Angeles Angels when he allowed four runs on eight hits (three homers) in six innings.

Montas is 2-1 with a 1.87 ERA in six career appearances (five starts) against Tampa Bay. Montas pitched seven scoreless innings in a no-decision against the Rays May 4 in Oakland and allowed two runs (one earned) in 6 1/3 innings to earn the win April 13 on the road.

Yarbrough allowed five runs in 3 1/3 innings Aug. 26 in Boston but earned the win when he allowed three hits in four innings of a 4-0 win in New York on Aug. 15.