With Damon Arnette Raiders Get Humbled, Appreciative and Talented Cornerback 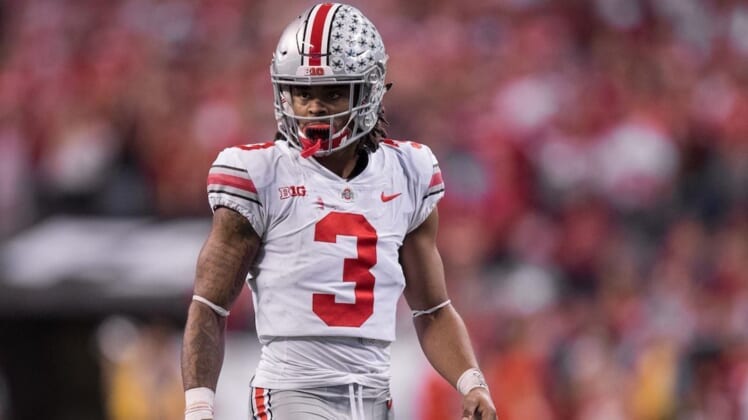 They say everyone’s journey is different and for Las Vegas Raiders draft pick Damon Arnette it’s been rough at times. The talented player brings his intensity, newfound maturity and high upside to a team in need of help at the position.

After the shock wore off, most NFL Draft observers struggled to understand why Las Vegas Raiders chose to pick what most believed to be a mid-second round cornerback at No. 19. Damon Arnette from Ohio State was most certainly on the radar, but not in the first round.

Had the Raiders reached for need as general manager Mike Mayock said last week the team should not?

“The reason he’s not a reach is because of his grade in our system,” Mayock said after Round 1 was over. “Did I think we could have moved down maybe and still got him? Maybe, but we didn’t want to lose him.”

So it came down to fit and Mayock and coach Jon Gruden liking the player. That makes the choice more clear despite what the rest of us think.

The choice of Damon Arnette could still be viewed as a reach, especially since the player had what most called “maturity” issues while playing at Ohio State. Those were mostly his first three years before finding his groove as a senior and returning to the Buckeye on the path to the NFL Draft.

“I chose to go back to school to rewrite my legacy at Ohio State,” Arnette said of returning for his senior season and earning his degree. “I felt like I wasn’t the best player I could be on or off the field, so I decided to come back to regather myself and start over.”

It was his mentality that ultimately changed his game. He played with a wrist injury in 2019 meaning he played with a cast the entire year. Yet he still posted good numbers teaming up with fellow first-round pick Jerry Okudah. Playing outside in the press, Arnette had his most consistent season and showed his ability to improve his technique and approach to the game.

We are going to go out there, run fast, hit hard, execute and that’s the type of football player I am. Bring some juice, you know what I’m saying? – New Raiders CB Damon Arnette

Like last year’s pick at safety for the Raiders, Jonathan Abram, Arnette also likes to hit and play a physical game. That meant he racked up too many penalties his junior year but was able to reign that in his senior campaign. Yet his physical nature is what he believes helps him to be the best player he can be.

“I’d say I’m a physical corner, competitive corner, dog, all the above,” Arnette said. “And I feel like the Raiders, we’re going to do the same thing. We are going to go out there, run fast, hit hard, execute and that’s the type of football player I am. Bring some juice, you know what I’m saying? Celebrate your teammates and all that stuff.”

As pundits questioned the selection of Arnette so high, the Raiders didn’t have a choice to get their guy in any other spot. Unable to trade down, and lacking the second-round pick they shipped to Chicago in the Khalil Mack trade, the Raiders went with who they liked best.

“What distinguishes him is No. 1, he can run. No. 2, he’s tough as nails and when you talk about competitors. He played most of the season with a cast on his arm,” Mayock said of Arnette. “He can play inside, he can play outside, he can play left, he can play right. We feel like this is one of the most competitive football players in the entire draft.”

While Arnette and the Raiders will have to prove he was worth his selection at No. 19, both sides feel he’s the right guy and one of the top players in this year’s draft.

When asked what fuels him it was other’s doubts that give him motivation.

“Always being looked at as underdog, always getting the short end of the stick in my athletic career.” Arnette, who survived the turmoil of the post-Urban Meyer era at Ohio State. “When you asked, ‘are you surprised you’re in the first round?’ I’m not, certain people might be surprised. I know those people are surprised because I’m always the underdog. But I already know what time it is every time I step on the field regardless of what someone has to say about me.”

Some are still doubting Arnette and it will take him stepping up, again, and proving everyone wrong this time in the NFL.

He’s already got believers in the two men who matter most.