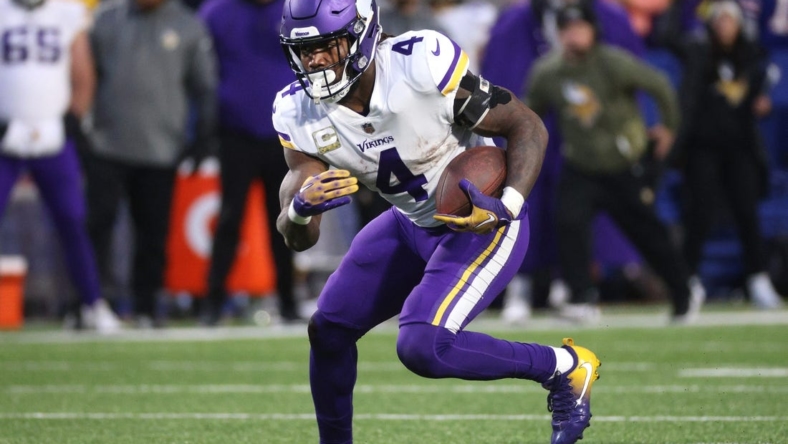 The Minnesota Vikings are the NFL’s hottest team with seven straight wins, including a scintillating victory in arguably the best NFL game of the season.

The Vikings (8-1) find themselves listed as underdogs at home this Sunday against the Dallas Cowboys (6-3) in Minneapolis. FanDuel and DraftKings list the Cowboys as 1.5-point favorites.

So does the perceived slight bother Minnesota coach Kevin O’Connell? Well, no.

In fact, he admitted Wednesday that he doesn’t listen to analysts on national television questioning if his team is a serious Super Bowl contender.

“I don’t hear because I don’t have a lot of time to take in the daily shows too much,” O’Connell said. “I will say this: At this point I know there needs to be some things to talk about. … If we focus on anything outside of our preparation for the Dallas Cowboys, I think I’d be doing a disservice to our team. And I think our players understand that as well.

People certainly are talking about Justin Jefferson, who received NFC Offense Player of the Week honors after recording 10 receptions for a career-high 193 yards and a touchdown in the Vikings’ 33-30 overtime win at the Buffalo Bills on Sunday.

There is plenty of talk about Dalvin Cook, who rolled up a season-best 146 scrimmage yards (119 rushing, 27 receiving) and a rushing touchdown against Buffalo. He has six touchdowns (five rushing, one receiving) over his last five games.

“Well, we don’t listen to that anyway,” Cook said of whether his team is getting the respect its due. “We just look for preparation each and every week and go out and perform well. Blocking the outside noise out, they are gonna say what they are gonna say anyway — whether it’s good or bad.”

Speaking of running backs, Ekeziel Elliott participated in Wednesday’s walk-through session. The two-time NFL rushing champion has been idle with a knee injury since scoring two touchdowns in Dallas’ 24-6 victory over the Detroit Lions on Oct. 23.

Cowboys coach Mike McCarthy told reporters Wednesday that Elliott will play on Sunday if he’s ready to return. He also added that the quick turnaround time for Dallas’ game on Thanksgiving will not impact on the team’s decision to play Elliott on Sunday.

“If he’s ready to play this week, we’re going to play him,” McCarthy said.

Tony Pollard has fared well in Elliott’s absence, rolling up 131 rushing yards and three touchdowns in the Cowboys’ 49-29 win over the Chicago Bears on Oct. 30 and 115-1 in a 31-28 overtime loss to the Green Bay Packers last Sunday.

Dak Prescott threw for three touchdowns against Green Bay. He also tossed three touchdown passes in an encounter versus the Vikings in 2019, however he was unavailable to play due to injury in last year’s 20-16 victory in Minneapolis.

CeeDee Lamb, who had 112 receiving yards in last year’s game, totaled career highs in catches (11) and receiving yards (150) to go along with two touchdowns last week. He also has three touchdowns in his last two games after totaling two in his previous 14.

As for the Cowboys, defensive end DeMarcus Lawrence (foot) was listed as a non-participant in Wednesday’s walkthrough session. Elliott, linebacker Anthony Barr (hamstring) and cornerback Anthony Brown (concussion) were listed as limited.