With Claude Giroux’s future in the air, Flyers head to Ottawa 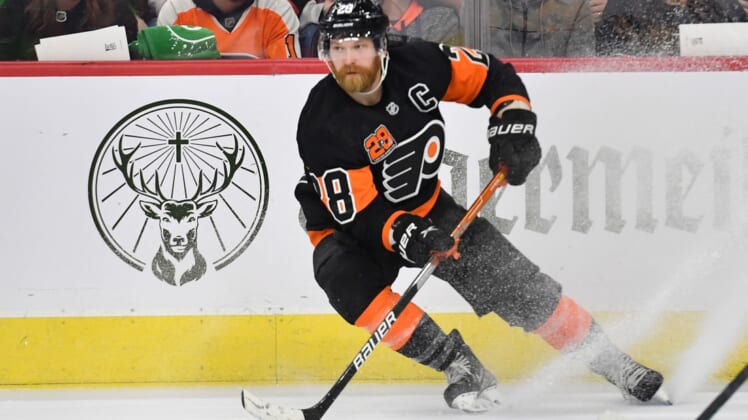 The Philadelphia Flyers have yet to win a road game in 2022. Star Claude Giroux might not be around for their next attempt to break their drought.

Considering how poorly the Ottawa Senators have fared at home, however, the Flyers might have a good chance to finally achieve that elusive road win when these teams meet on Friday night, even if Giroux isn’t there.

In his 15th season with Philadelphia, Giroux joined legend Bobby Clarke as the only Flyers to play 1,000 games for the storied franchise. He reached that milestone Thursday during a comeback 5-4 home win over Nashville. Giroux, who didn’t record a point in the game but has 900 points in a Flyers sweater, apparently will not be with the team in Ottawa as he awaits a potential trade — as NBC Sports Philadelphia and NBC10 Philadelphia have confirmed initial Internet reports.

Yet, the immediate focus for Philadelphia is ending an 0-9-2 road slide that dates to a 3-2 overtime win at Seattle on Dec. 29. The Flyers have been outscored 48-25 during this winless road rut that’s tied for third-longest in club history.

Philadelphia, however, has something positive to build on after Kevin Hayes and Joel Farabee scored in the final 4:55 of regulation to help erase a 4-3 deficit and halt an 0-2-1 rut on Thursday. The pageantry, excitement and emotion of the night likely had something to do with Philadelphia’s rally.

“It’s a little bittersweet for sure,” said Flyers netminder Carter Hart, who made 30 saves in the win. “(Giroux) has given a lot to this city — and us.”

“Pretty special night to cap it off like that for him. And, get a big two points.”

Giroux scored in the Flyers’ 4-3 overtime home victory over the Senators on Dec. 18. Scheduled Philadelphia starter Martin Jones (3.42 goals-against average) made 28 saves in that contest.

Much like the Flyers, Ottawa has endured a disappointing 2021-22, and enters a loser of three straight — all at home — and eight of 10. Following a 4-1 loss to Columbus on Wednesday, the Senators have been outscored 15-7 during their current three-game skid.

Monday’s trade deadline also appears to be a collective mental hurdle in the Senators’ dressing room.

“This week can’t get over fast enough when it comes to the trade deadline, to get that out of some guys’ minds, to know if they are here or not,” coach D.J. Smith told the Ottawa Sun. “That seems like it’s weighing on a few guys.”

Ottawa’s Anton Forsberg made 35 saves on Wednesday and has allowed 12 goals over his last three starts. Forsberg stopped 34 shots at Philadelphia in December. Meanwhile teammate Filip Gustavsson has a 4.41 goals-against average during a six-game losing streak.

Second on the team with 35 points, Ottawa’s Tim Stuetzle scored against Philadelphia this season. He has recorded just one of his 13 goals over the last 10 games, but Stuetzle has posted seven assists in the last seven.

Farabee, who had a goal vs. Ottawa, has three points in the last two games — matching his total from the previous six contests.