With Bill Self back, No. 3 Kansas faces NC State in the Bahamas 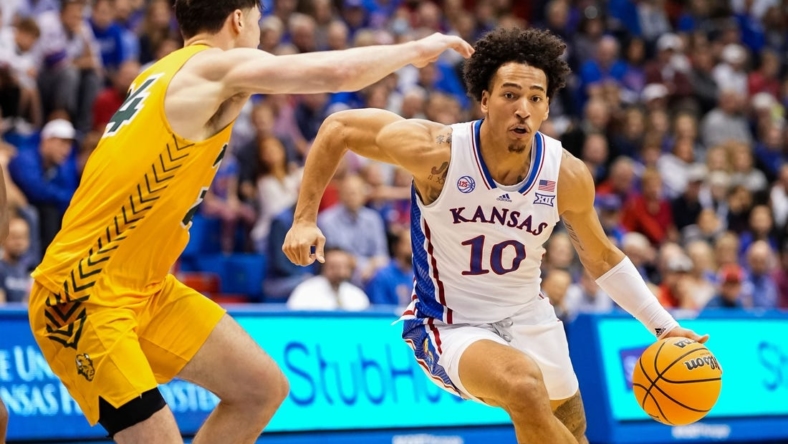 No. 3 Kansas already has some nice accomplishments this season, and now the Jayhawks get their coach back and head into to a high-profile tournament.

Bill Self will be on the bench for the first time this season when the Jayhawks take on North Carolina State on Wednesday in the opening round of the Battle 4 Atlantis in Paradise Island, Bahamas.

NC State has made headway in its own way early this season, but the focus for this tournament opener is on the Jayhawks and Self. The coach finished a four-game suspension imposed by the university stemming from an NCAA investigation in 2017.

Assistant coach Kurtis Townsend is also back from a ban that was connected to Self’s suspension. Norm Roberts had filled in as acting coach.

This is Self’s 20th season with the Jayhawks. Even though he wasn’t on the scene to start the season, this marks the ninth time since he took charge in 2003 that Kansas is off to a 4-0 start.

Forward KJ Adams Jr. — at just 6-foot-7 — has given the Jayhawks a boost up front. It’s unclear if he’s locked into that starting role.

“That will be a question for Coach Self, but I think KJ has done a really, really good job for us,” Roberts said. “I can tell you this, KJ Adams is going to play a lot of minutes.”

Redshirt junior Jalen Wilson leads the Jayhawks with a 24.5-point scoring average. He has posted career-high marks in the past two games, scoring 25 points in the Top 10 showdown with Duke in the Champions Classic, and then 33 points against Southern Utah.

NC State (4-0) is leaving home for the first time this season. The opening homestand was probably useful for a team trying to create an identity and figure out how newcomers are going to fit into the system.

NC State didn’t receive much respect coming into the season — projected 10th in the media’s ACC preseason poll — so this is the Wolfpack’s first chance to make a big splash.

“We’re just looking forward to the next game,” guard Jarkel Joiner said. “Any opponent we take seriously, but we know it’s Kansas and we’ll be ready.”

The Wolfpack have had blowouts and less comfortable late-game leads, a mix that the team hopes will aid the team’s development.

“We’re going to fight through adversity, that we all play together,” said NC State guard Terquavion Smith, who is averaging a team-high 19 points. “We’re a great team and we’re gelling.”

The Wolfpack appear to be built from the outside in: Of their 69 shots from the field in Saturday’s 74-63 victory against Elon, 33 came from beyond the 3-point arc.

“This is a 3-point shooting team,” Keatts said. “We are probably going to average around 30 of them a game. We typically get 70 to 75 shots a game because we force tempo and steals and everything else.”

Smith, Casey Morsell and Joiner have combined for 31 3-point baskets this season.