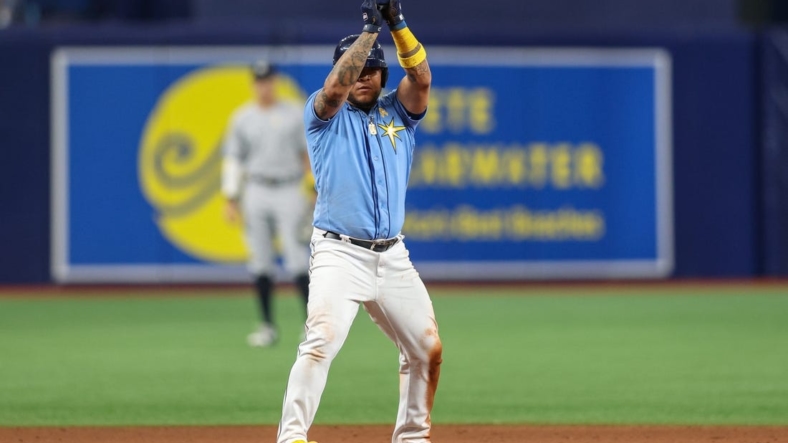 As the New York Yankees see their American League East lead shrink almost by the day, the postgame reactions are growing more emotional.

So far, strong words are not translating into the turnaround the Yankees talk about performing.

The Yankees hope Saturday is the start of their change of fortune as they attempt to rebound from their latest frustrating loss when they continue a three-game series with the Tampa Bay Rays in St. Petersburg, Fla.

Eight weeks after leading the division by 15 1/2 games, New York leads by just five games over the Rays after it mustered five hits, struck out 13 times and went 0-for-7 with runners in scoring position in a 9-0 loss on Friday.

The Yankees won five straight after manager Aaron Boone pounded the table in the Yankee Stadium interview room following a 5-2 loss to the Toronto Blue Jays on Aug. 20. Since its 3-2 win in Oakland on Aug. 26, New York is 1-5, has scored 15 times and gone 3-for-30 with runners in scoring position.

Besides being unable to produce much offense, the Yankees committed three errors on Friday after making consecutive errors before Shohei Ohtani’s three-run homer in the sixth inning on Wednesday.

“That’s an embarrassing loss,” Boone said. “That’s hopefully one of those rock bottom situations where you should be pissed off and embarrassed. We’ve set a better standard around here.”

New York was without first baseman Anthony Rizzo, whose bad back will keep him out for the series. The Yankees are also likely to be without Andrew Benintendi, who will get an MRI on his right wrist.

Boone said Benintendi felt something pop in his wrist. Benintendi left the game Friday in the third inning.

“We’re going to see what this team is made of,” New York slugger Aaron Judge said. “We’ve got to bring it, that’s it. Nobody on the outside is going to help us, nobody is feeling sorry for us.”

Tampa Bay is within five games of the lead for the first time since May 30. Since trailing by 15 1/2 games following its three-game sweep by Cincinnati on July 10, the Rays are 28-17.

The Rays are also 15-4 since Aug. 13, and during their four-game winning streak, they have outscored opponents 30-7. On Friday, Manuel Margot had two of his three hits in a six-run eighth and the Rays produced 11 hits.

“Anytime we can come out like we did tonight and start a series like that, it’s good,” Tampa Bay starter Jeffrey Springs said. “It’s definitely a big momentum rolling into tomorrow.”

Kluber is 5-3 with a 2.27 ERA in 11 career starts against the Yankees. He took a no-decision Aug. 17 in New York when he allowed two runs in six innings.

For the Yankees, Clarke Schmidt (5-3, 2.89) will make his fifth career start and second in place of the injured Nestor Cortes.