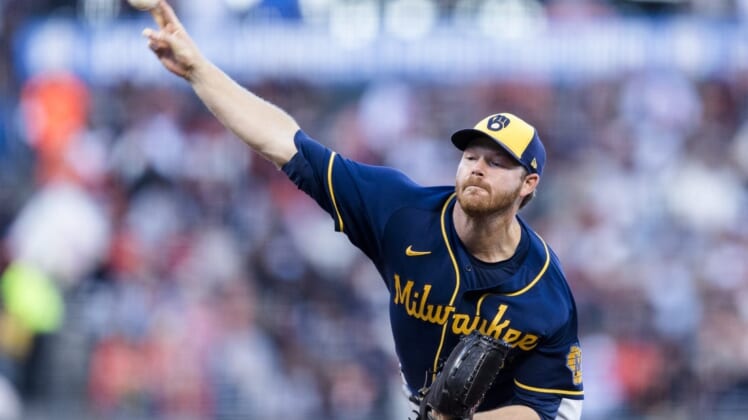 After salvaging the series opener in 13 innings on Friday, the Milwaukee Brewers will turn to right-hander Brandon Woodruff against the visiting Colorado Rockies on Saturday.

Milwaukee won the series opener 6-5 on Friday night on Luis Urias’ bloop RBI single in the bottom of the 13th. Colorado went up 5-3 with two runs in the 10th, but Hunter Renfroe kept the Brewers alive with a two-run homer with two outs in the bottom half.

“A lot of crazy innings at the end, obviously when you go to extra innings and you start with men on base,” Brewers manager Craig Counsell said. “But I mean in the end, I thought we just pitched really well. Guys just kept doing a nice job on the mound and gave us a chance.”

The Brewers did get a solid inning out of struggling closer Josh Hader, who pitched a scoreless ninth inning with the score 3-3. Hader, almost unhittable the first two months of the season, had allowed walk-off home runs in each of his past two outings.

Milwaukee, which had lost three straight and six of eight heading into the All-Star break, has won six consecutive games against Colorado.

Since coming off the injured list on June 28 following an ankle injury, Woodruff is 2-0 with a 2.38 ERA in four starts. In his most recent outing on July 16, he left with a 5-2 lead but did not get a decision when Hader allowed six runs in the ninth in an 8-5 loss at San Francisco.

Woodruff allowed two runs in 5 2/3 innings against the Giants but also tied his career high with five walks in the 112-pitch outing.

“He wasn’t really locked in. I think he was struggling with his command a little bit,” Counsell said after Woodruff’s start in San Francisco. “He kind of survived it by just kind of keep making pitches and not giving in.”

Woodruff is 0-1 with a 9.24 ERA in three career starts vs. the Rockies, all at Coors Field.

Urena, who was designated for assignment by the Brewers in early May after four relief appearances, will make his fourth start with Colorado. He has turned in three consecutive quality starts with the Rockies, allowing three runs in 18 2/3 innings.

He made five starts at Triple-A Albuquerque before being called up in early July.

Urena is 0-1 with a 5.84 ERA in nine career appearances vs. Milwaukee, including three starts.

“The arm strength is there from Albuquerque and here now with three big league starts,” Rockies manager Bud Black said after Urena’s most recent start. “Able to get to a pitch count with no problem because of what he did in Albuquerque. And what he’s doing now is pumping that fastball in there in the mid-90s with sink, keeping the ball down, occasional slider, occasional change … really throwing the ball well.”