Wisconsin starting running back and leading rusher Chez Mellusi will miss the rest of the season with a left leg injury, coach Paul Chryst said Thursday.

The loss is significant for the run-first Badgers, who now are without the top three running backs who opened the season.

Isaac Guerendo suffered a season-ending left leg injury last month, and Jalen Berger was dismissed from the team for unspecified reasons in October.

Mellusi, a transfer from Clemson, sustained the injury in the third quarter last week in the Badgers’ 52-3 win over Rutgers. He carried the ball 15 times for 75 yards and a touchdown before the injury. 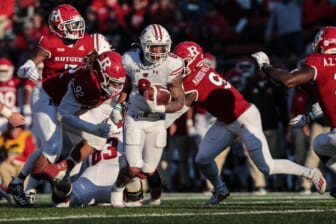 While Chryst didn’t detail the injury, he said Mellusi would not be taking park in spring practice.

Mellusi had 815 yards on 173 carries (4.7 yards per carry) and five touchdowns for the season. He also caught seven passes for 66 yards.

“That obviously saddens all of us,” Chryst said. “There’s nothing more important, and why guys do this is to be able to play in these games. … I thought he gave a ton to this team, certainly in production, but a lot of other areas.”

Freshman Braelon Allen is expected to become the No. 1 back.