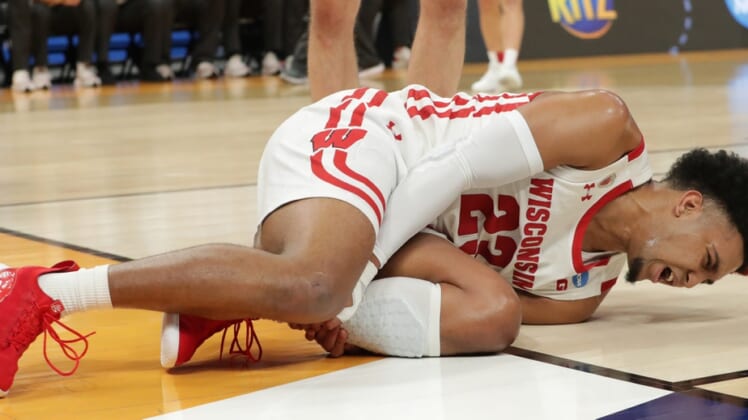 Wisconsin point guard Chucky Hepburn missed the rest of the Midwest Region second-round 54-49 loss to Iowa State after he injured his left foot late in the first half on Sunday.

Following a driving layup by Iowa State’s Tyrese Hunter, Hepburn ended up down on the court in a lot of pain with 4:37 left in the half. He was helped from the court, putting no weight on the left foot.

At the start of the second half, Hepburn returned to the Badgers’ bench on crutches with his lower left leg in a walking boot.

Hepburn, a freshman, averaged 7.9 points and a team-leading 2.3 assists per game for the Badgers (25-8) this season.

He left the game having gone 0 for 3 from the field with zero points. Wisconsin trailed Iowa State 27-26 at the half.

“We have an offensive game plan, a defensive game plan (and) he’s a big leader, a big foundation of what we try to do,” teammate Brad Davison said of Hepburn. “When we lost him we had to make audibles on the run. It was a next-man-up mentality. We gave full effort but just turned the ball over a few too many times and missed a little too many shots.”