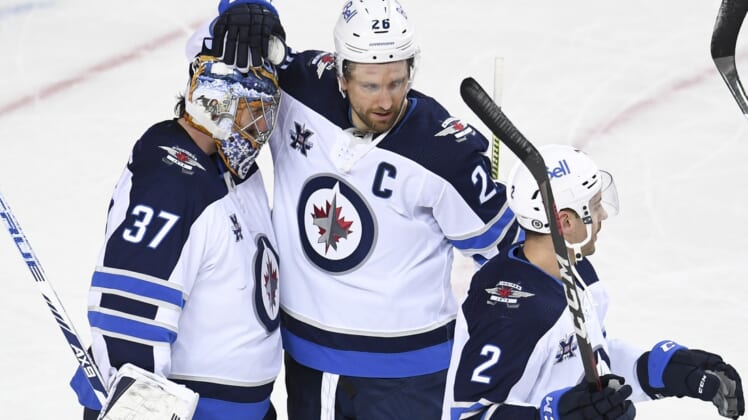 The Winnipeg Jets have a bit of pep in their step after winning four of the last five contests on their season-high seven-game road trip.

The Jets aim to continue their good fortune at home on Wednesday when they begin a two-game set against the Toronto Maple Leafs.

Winnipeg answered a 4-2 setback to Calgary on Saturday by scoring five unanswered goals two nights later in a 5-1 win over the Flames. Jets coach Paul Maurice flipped his two top centers, with Mark Scheifele (two goals, assist) responding to the line change by matching Nikolaj Ehlers (three assists) with a three-point performance while Pierre-Luc Dubois adjusted to his new pairing by scoring a goal.

“When you get to the end of a really long road trip, your team has played well, and you’ve had a tough loss, sometimes you need something to almost fire up a little interest — if that makes sense,” Maurice said. “It’s a long grind. One of the old coaches I used to work with, Kevin McCarthy, always said ‘a change is as good as a rest.'”

Scheifele has team-leading totals in assists (28) and points (43), with three and six, respectively, coming in his last five games.

The Maple Leafs enter their four-game road trip after extending their point streak to four games (3-0-1), albeit after a 3-2 overtime loss to the Edmonton Oilers on Monday.

Auston Matthews has scored in back-to-back games to lift his NHL-leading goal total to 23. He also has two assists on his current three-game point streak and has scored three goals and set up two others to help Toronto split its first four meetings with Winnipeg this season.

Mitch Marner recorded his 12th multi-point performance of the season after collecting a goal and an assist on Monday. He boasts team-leading totals in assists (31) and points (44), with three and six, respectively, coming against the Jets this season.

Jack Campbell was in net for all three wins during the Maple Leafs’ current point streak and is expected to put his perfect 6-0-0 record on the line Wednesday.

“We’ve got to really be smart with how we manage Jack’s workload here,” Toronto coach Sheldon Keefe said of Campbell, who recently returned from a lower-body injury. “The reality is that he hasn’t been playing at 100 percent and the games take a toll on him. The combination of the fact that he’s not used to playing multiple games in a row and the fact that his body hasn’t quite cooperated with him the way he’d like it to through this season, we’ve got to be really smart.”

Campbell owns a 2.01 goals-against average and .942 save percentage in four career starts versus Winnipeg, but has just a 1-2-1 mark to show for it.

Reigning Vezina Trophy recipient Connor Hellebuyck likely will get the start for Winnipeg. Hellebuyck has turned aside 114 of 118 shots during his personal four-game winning streak.