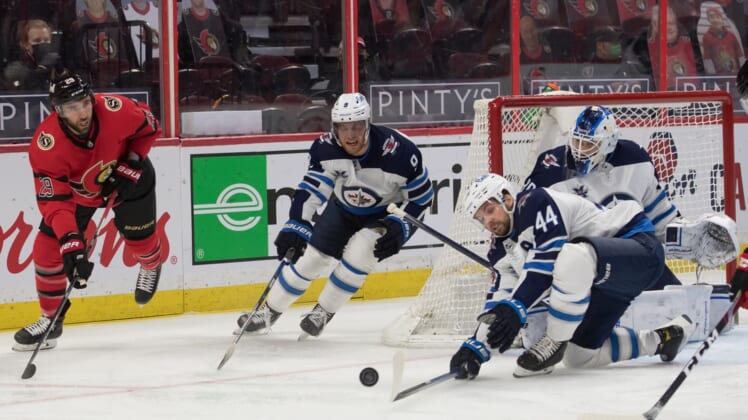 Mathieu Perreault and Trevor Lewis led a third-period surge on special teams as the Winnipeg Jets defeated the host Ottawa Senators on Wednesday.

With the score tied 1-1 at 2:07 of the third frame, Perreault converted a delayed wrist shot from the circle for a power-play goal.

Ottawa looked to equalize on a power play of its own midway through the period, except Lewis capitalized on a turnover to score a short-handed goal.

It was Lewis’ third goal of the season, and his second short-handed marker. Lewis has both of Winnipeg’s short-handed goals this season.

Mark Scheifele scored the Jets’ other goal as Winnipeg improved to 8-3-1 over its last 12 games.

The victory brought the Jets within five points of the Toronto Maple Leafs for first place in the North Division. The Jets and Leafs play four times in a 10-day span, beginning Thursday in Toronto.

Nick Paul and Josh Norris scored for Ottawa. Paul put the Senators ahead just 79 seconds into the game, while Norris scored a power-play goal with 10 seconds remaining in regulation to provide Ottawa some late hope.

Thomas Chabot had two assists for the Senators.

Both Scheifele and Nikolaj Ehlers (one assist) extended points streaks to five games. Ehlers has seven points (three goals, four assists) over his streak, while Scheifele has an even five points (one goal, four assists).

Jets goaltender Laurent Brossoit stopped 27 of 29 shots to earn his sixth victory of the season.

After missing 14 games due to an upper-body injury, Matt Murray looked solid in his return to the Senators’ net. Murray stopped 32 of 35 shots.

Connor Brown went scoreless, ending the Ottawa forward’s goal-scoring streak at eight games. It was the longest goals streak in the NHL since Mike Green’s eight-game streak in the 2008-09 season.

Senators defenseman Nikita Zaitsev was a late scratch after suffering a lower-body injury during warmups. Jacob Bernard-Docker made his NHL debut in Zaitsev’s place.

The Jets are 6-2-0 against the Senators this season.