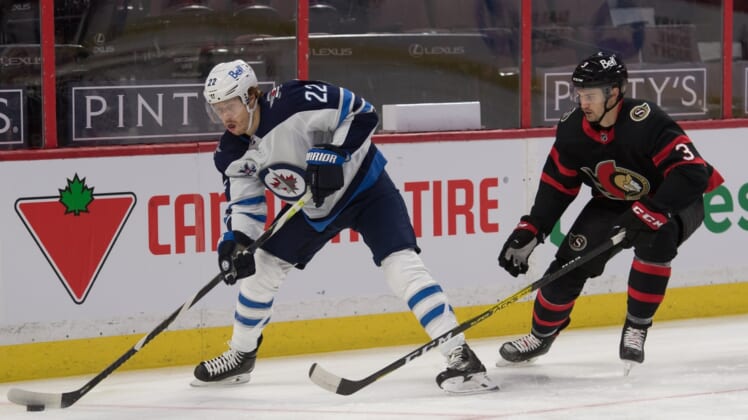 Nikolaj Ehlers and Mark Scheifele each had a goal and an assist as the visiting Winnipeg Jets recorded a 4-1 victory over the Ottawa Senators on Thursday.

Winnipeg has won its last two games, while the Senators are on a three-game (0-2-1) winless streak.

The Jets have scored at least four goals in three of their four games this season. Two of those scoring outbursts came against Ottawa within three days, including Tuesday’s 4-3 overtime victory.

Ehlers, who scored the game-winner on Tuesday, followed up by netting the opening goal on Thursday. At 11:50 of the first period, Ehlers fired a shot from the deep slot through traffic that found its way through the legs of Senators goaltender Matt Murray.

With the early lead in place, the Jets exploded for three goals during a dominant second period. Winnipeg cut through the Senators’ defense with some crisp passing to set up the Scheifele and Wheeler goals.

At the 7:05 mark of the second, Trevor Lewis had a partial breakaway, and his shot banged off the post. Lowry was in position to deposit the rebound for his second goal of the season.

Chris Tierney had Ottawa’s only goal, scoring 17:03 into the third period.

The Senators were even (29-29) with the Jets in shots, but Winnipeg goaltender Connor Hellebuyck made 28 saves to hold Ottawa at bay. In five career games against Ottawa, Hellebuyck is a perfect 5-0-0 with a .934 save percentage.

Winnipeg’s power-play unit continued its slow start, going 0-for-7 with the extra attacker on Thursday. The Jets have only two goals in 20 power-play chances this season.

Murray stopped 22 of 26 shots and was replaced by Marcus Hogberg after the second period.

The Jets look to sweep the three-game series with the Senators when the two teams play again on Saturday, this time in Winnipeg.