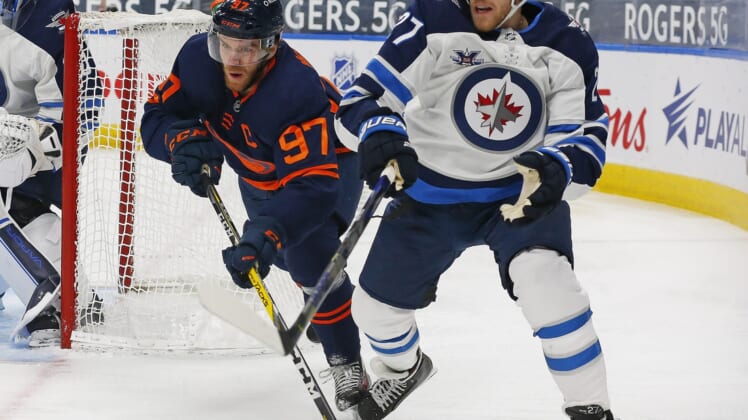 The NHL’s regular season has just hit the halfway mark for most teams, but don’t try telling that to Edmonton Oilers star Connor McDavid.

For McDavid, it already feels like Stanley Cup playoff time.

The Oilers, who moved into a tie for first place with Toronto in the North Division by grinding out a 2-1 victory over visiting Winnipeg on Thursday, will try and complete a sweep of their back-to-back with the third-place Jets on Saturday.

“It’s kind of a playoff mentality,” McDavid said after scoring both of his team’s goals to increase his league-leading scoring total to 58 points (20 goals, 38 assists), nine more than teammate Leon Draisaitl. “I think it’ll continue that way throughout. Everyone’s kind of in the race. A couple of off nights and it tightens up really quick. So, you need to be on your game each and every night.”

McDavid scored the game-winner midway through the second period, just 38 seconds after Mathieu Perreault had tied it for the Jets. He will take an eight-game point streak into Saturday night’s rematch that includes six goals and 12 assists.

“Our whole coaching staff talks about it every day, how much he’s dug in to playing a real winning style of game,” Tippett said. “You notice the great things he does in the game offensively but he’s a solid, dependable player in our own zone and he doesn’t get enough credit for that.”

“I loved the way our team played,” said McDavid. “I thought we were solid all over and really did a good job of clogging up the middle. Our D really moved pucks well, broke it out well, and ‘Koski’ held us in there when he had to.”

“Koski” would be goaltender Mikko Koskinen, who stopped 24-of-25 shots and withstood a strong, late-shooting barrage by the Jets to help the Oilers hold on for their second straight victory.

“We played a really solid game all over the ice,” said Koskinen. “I didn’t think there were that many odd-man rushes, which is pretty crucial for us, and we didn’t lose the puck at the blueline.”

“They were one goal better than we were tonight and I think that’s about all you can say about our game,” said Winnipeg coach Paul Maurice. “We cracked a couple of posts; they had some good chances. It was hard-fought.”

It was just the fourth loss (9-4-1) in the last 14 games for the Jets, who are at the beginning of a season-long, seven-game road trip. It’s also part of a stretch that will see Winnipeg play 12 of 16 games on the road.

The Jets are 8-0-1 in games following a regulation loss this season with a 4-3 shootout setback to Calgary on Feb. 1 the only blemish. A victory on Saturday would not only split the road back-to-back but also move Winnipeg back into a tie with the Oilers.

“That’s the way it goes sometimes,” said Mark Scheifele, who missed a solid chance to tie Thursday’s contest in the final seconds when the puck bounced over his stick. “You can’t get them every night, so we have to regroup and be ready for the next one.”