The Tampa Bay Buccaneers hosted the New England Patriots to get Week 5 kicked off on Thursday Night Football, and it was quite a sloppy game.

The Patriots weren’t at their best but pulled out a 19-14 win on the road. Which is not easy to do on a short week. Now they move to 3-2 on the season and have 10 days to fix what ails them. Tampa Bay, on the other hand, has some serious stuff to figure out after dropping to 2-2 on the season.

These were the biggest winners and losers from Thursday Night Football in Week 5. 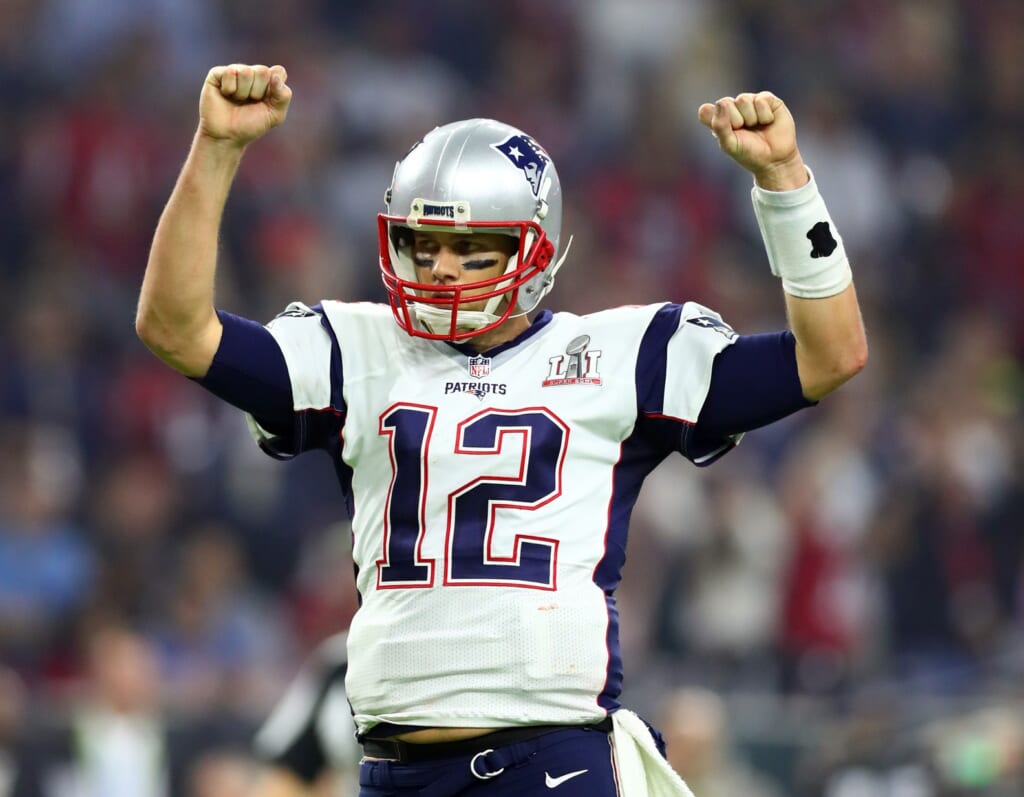 Tom Brady threw an interception in the first quarter that made us do a double-take. It was awful. There were no Patriots receivers around the ball, and Justin Evans was practically gifted the pick. It was Brady’s first road interception since Week 16 of the 2015 season, and we wondered if the Buccaneers were on their way to an easy win.

Brady rebounded, to say the least. At one point he completed 13 straight passes and kept New England’s offense rolling, despite being under fire all night long (more on that in a bit). The 40-year-old wonder finished the game with 303 yards on 30-of-40 passing with one touchdown and the one interception. It wasn’t his flashiest game, but in an ugly contest he came out of it with the win and a pretty good overall performance.

The end of first half of Thursday night’s game was an embarrassment for everyone involved. The Bucs were trying to get down the field with 35 seconds left on the clock, from their own 22-yard line. In the end, they were able to get a field-goal attempt out of the effort. But it had nothing to do with Jameis Winston’s brilliance or a big play by Doug Martin. Instead, the final drive of the first half was an epic debacle

It started with there was a sideline scuffle involving DeSean Jackson and Malcolm Butler. Punches were thrown, and if we’re being honest ejections could have been levied. Instead, the game went on like nothing happened, but clearly tempers were flaring. This leads us very nicely into the next two plays, which resulted in 30 yards of field position in favor of the Buccaneers. How did this happen, you ask? Well, it’s easy. The Pats were hit with roughing the passer penalties on two consecutive plays. Tampa Bay wasn’t doing anything to get downfield, but those two penalties gave the Bucs life they didn’t really deserve.

This led to a 56-yard attempt by Nick Folk that could have cut the lead to three points. But just like everything else that happened on this drive, his kick was atrocious. Not even close, as he pushed it about 20 yards to the right of the uprights. To be fair, it was a long attempt into the wind, but he looked more like Montgomery Burns on this one than an NFL kicker.

In a five-point game, Folk’s three misses were the difference between winning and losing for the Bucs.

For three weeks, there wasn’t a defense in the NFL worse than the one residing in New England. The Patriots were allowing 456.8 yards total, 324 yards through the air and 32 points per game on average.

Tampa Bay hasn’t been roasting teams like, say, the Kansas City Chiefs or Los Angeles Rams, but the Bucs have some very dangerous weapons on offense. So, this one felt like it could get out of hand early, especially after Brady coughed up that early interception.

Instead, the Patriots locked down Jameis Winston and Co. with a stellar effort in the first half.

While the Bucs did manage to get some positive things going in the second half through the air, it’s safe to say the Patriots’ defense contributed to the win for the first time all year. Even right down to the wire when they nearly picked off Jameis Winston on the game’s final play.

Tom Brady hasn’t been hit as often as he is getting blasted this year in quite some time. Before the third quarter was up Thursday night, he had been sacked one more time in 2017 than he was all of last season.

One of the biggest reasons is that blind-side protector, Nate Solder, is not playing at the same level we’ve seen in the past. Tony Romo, CBS’ color man Thursday night, mentioned multiple times that he feels like maybe Solder is injured because of the way he’s performing. Whatever the reason, it’s clear this is a player who is not carrying his weight.

The offensive line also committed penalties that are uncharacteristic of the units of years past in New England. Solder was responsible for a couple significant penalties that cost the Patriots, as were others.

Think we can all agree Brady runs like a 40-yr old. pic.twitter.com/zYiPMQGkb8

Brady coughed up a fumble at one point in the third quarter, but that was on the offensive line. The right tackle never picked up the blitzing linebacker, who had a free shot at Brady. And at the age of 40, he cannot afford to get hit like this on a regular basis.

Winner: Doug Martin is back, and he looks like he never left

It’s really too bad Buccaneers head coach Dirk Koetter didn’t lean on Martin a bit more in this game. The man formerly known as Muscle Hamster returned from his three-game suspension and looked like his old, dominant self when he got his chances.

Martin scored a touchdown in the first half and finished the game with 74 yards on the ground, averaging 5.7 yards per tote. He had some chances to make plays in the passing game as well, but two of the three times in which Jameis Winston targeted him the passes were too high and too hot to handle.

The Buccaneers and fantasy owners who had Martin stashed on the bench while he was suspended are no doubt happy about Thursday’s showing. Now we’ll have to see if the Bucs start to use him more in the coming weeks. 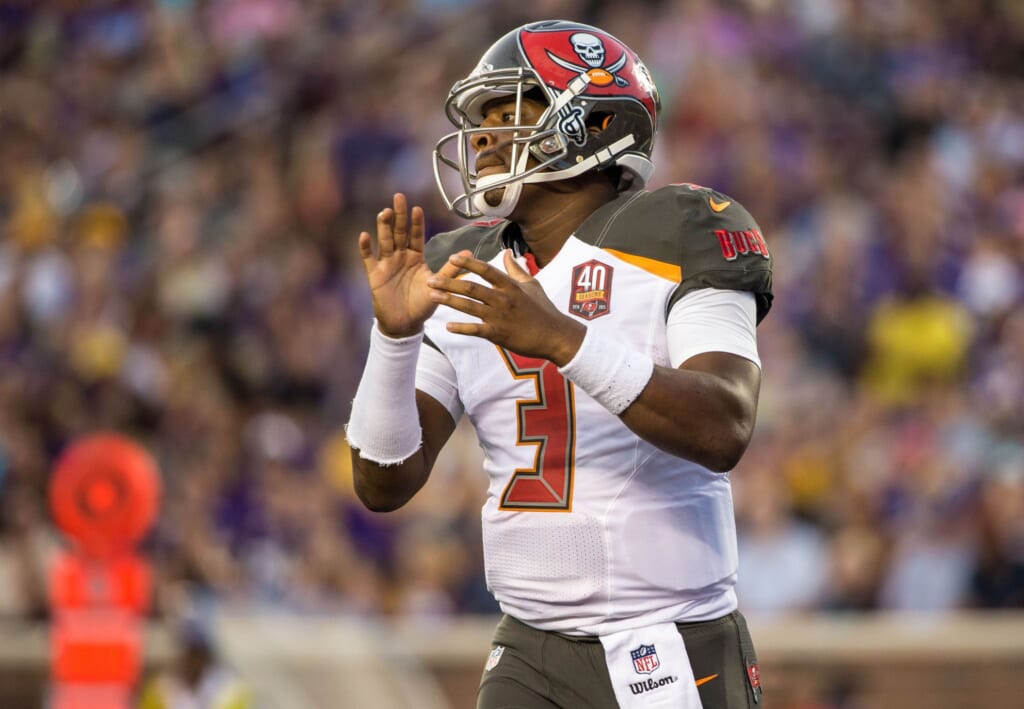 Talent is not an issue with Jameis Winston. But accuracy is. This young man missed wide open targets on multiple occasions, including a glaring mistake when DeSean Jackson got wide open down the right sideline. Winston overthrew his speedy receiver by a few yards, which isn’t easy to do.

Thanks to some garbage time yardage and a late touchdown to Cameron Brate (who had some serious butterfingers in this one), Winston’s fantasy owners came out of this one with at least a few points. He finished with 334 yards on 26-of-46 passing with one touchdown and no interceptions.

But the Buccaneers cannot be happy that Winston continues to display awful accuracy and less than ideal decision making. He made things fun at the end, but it was too little, too late.

Winner: No Gronk? No problem

The Patriots are pretty remarkable. Rob Gronkowski was a late scratch due to a thigh injury he suffered earlier in the week during practice. He’s been making huge plays the past three games, catching 20 passes for 318 yards and two touchdowns. That kind of production is hard to replace.

New England’s tight ends were non-existent Thursday night. Instead, Brady relied on his running backs and receivers to get the job done through the air. Danny Amendola was so clutch. He caught all eight passes thrown his way, totaling 77 yards and coming up with multiple third-down conversions. Chris Hogan continues to be a high-volume receiver, and he caught the only touchdown of the game for the Pats. Brandin Cooks and James White both had big plays through the air as well, and the running game put forth a great effort as well.

It wasn’t the flashiest offensive showing we’ve seen from the Patriots in recent years, but they did what they had to do for the win. 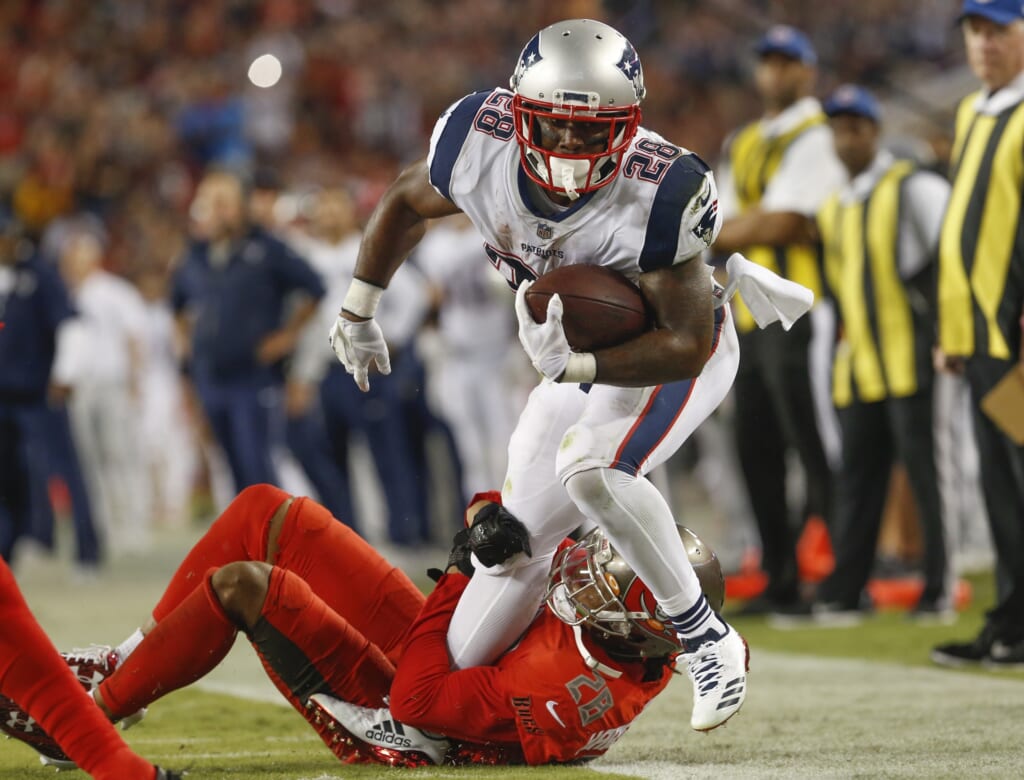 The Buccaneers drafted Hargreaves last year, spending the No. 11 overall pick to land him. So far, he’s playing more like a future bust than a guy the franchise can build around. Countless times (seemingly) on Thursday night, Hargreaves was caught with his pants down in soft coverage, and Brady picked him apart. Romo couldn’t stop harping on the second-year player because his level of aggression was so godawful.

Perhaps he was worried about being beaten over the top. Perhaps his confidence is shot. Whatever the reason, Hargreaves simply looks lost right now. He made plenty of tackles (six), but that’s because he was running downhill to haul down receivers who already had the ball in their hands.

Through 20 career games, this young cornerback has just one interception and 11 passes defended. Heading into Thursday night’s game, he was rated by Pro Football Focus as the No. 93 cornerback in the NFL (43.2 grade)Those are not numbers that match the expectations the Bucs had when they drafted him.