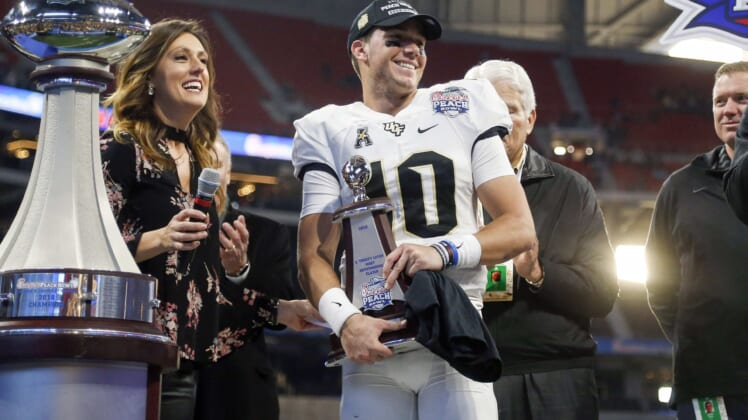 College football is back, and Thursday night’s action provided us our first taste of what should be an electrifying season. Even more importantly, it provided us some winners and losers from the first major slate of football.

While Thursday’s action wasn’t loaded with elite teams, we saw plenty of new names jump into the national spotlight. Every great player has that breakout game, and a few new faces might have just had their moment.

Of course, there were some downright ugly moments and performances. Kicking off the season on a down note can leave an awful impression. While it will just be a minor setback for some, it might also be a season-defining moment for others.

Here are the winners and losers from Thursday night’s college football action.

While some will continue to doubt Milton because of his size, Central Florida’s star quarterback continues to prove himself as one of the best quarterbacks in the country. We saw greatness from him in 2017 with over 4,000 passing yards, a 37/9 TD/INT ratio and eight rushing touchdowns. Now he is raising the bar.

Milton kicked off his 2018 season with a phenomenal performance against the University of Connecticut. He finished the night with 50 rushing yards, demonstrating his dual-threat ability. Milton was even better through the air with 346 yards and five touchdowns.

Even if Milton’s listed height at 5-foot-11 is generous, the junior packs enormous talent into an undersized frame. If he keeps this off and the Knights continue to roll, Milton could be a serious candidate for the Heisman Trophy.

It may be early in the season, but this a loss Purdue will remember for some time. The Boilermakers hung around with Northwestern most of the night, but three interceptions by Sindelar proved fatal to Purdue’s chances.

Even worse for the junior, Northwestern scored touchdowns on all three possessions following those interceptions. His mistakes directly led to points that set his team back in seemingly every crucial moment.

Sindelar won the quarterback competition in camp, but ultimately forced his coach to turn to senior David Blough before the first half even concluded. While Sindelar should see another opportunity, this was a major setback for himself and the Boilermakers.

Talk about a lasting first impression in front of a national audience. In his first collegiate game, Purdue’s freshman wide receiver exploded on ESPN. When it was all over, Moore made himself known as one of the most electric weapons in college football.

Moore demonstrated the ability to be a playmaker in multiple aspects. The freshman racked up 125 kickoff return yards and was even better on offense. Purdue sought to get the ball in his hands in every way possible, including an incredible 76-yard touchdown run.

When the night was over, Moore finished with a team-high 79 rushing yards, 11 receptions and 109 receiving yards. He found the end zone twice, made defenders miss and looked like a player in a video game. Moore is a player everyone will have to watch closely as the season unfolds.

While taking over for a great quarterback can be difficult, the task is usually supposed to be easier when facing an inferior opponent. Instead, Cornelius showed everything that the Cowboys will miss this season following the loss of Mason Rudolph.

In his first start, Cornelius was frustratingly inconsistent against Missouri State. The senior quarterback showed plenty of flashes with five touchdowns, but he essentially eliminated any threat of a deep passing attack and threw an interception in the red zone. Repeatedly he either overthrew or underthrew his receivers on shots down the field.

If the Cowboys want to have any shot in the conference this season, Cornelius needs to step up and be far more consistent than he was in the opener. The defenses he will face are only going to get tougher from here, and after years of an explosive offense, this team could be held back by Cornelius issues with the deep ball.

After landing Fisher with a massive contract, fans in College Station wanted to see immediate results to start the season. Even if it came against Northwestern State, fans should be pleased.

Not only did the Aggies walk away with a blowout win, but one of Fisher’s first recruits came through in a big way. After years of receiving close to zero production from tight ends, junior Jace Sternberger emerged with 56 receiving yards and two scores in his debut.

Even before the game was over, Fisher had won over the student section with chants of “Jimbo” being screamed by the students in attendance. It was a great tuneup game for Fisher’s squad before they face a major test against the Clemson Tigers

While bringing back Edsall before the 2017 season seemed like a good idea, it’s starting to look like this will be another bad sequel.

Edsall, who coached the Huskies from 1999-2010, has not found anything close to the success he enjoyed during his first tenure in Connecticut. The Huskies finished 2017 with three wins and attendance proved to be a major problem for the school. If Thursday’s game is any indication of where this team stands, things are about to get worse.

The Huskies were humiliated by Central Florida with performances on both sides of the ball that would raise significant questions. UConn trailed by three-plus scores for a majority of the game and things could have been even worse if the Knights didn’t put on the breaks. While there might be pleasant memories of Edsall, he went 22-34 at Maryland and his second stint with the Huskies is quickly looking like a failure.

After spending his first year with the Golden Gophers learning the offense, Ibrahim received his first opportunity to shine on Thursday night.

Even with a limited workload as the backup tailback, Ibrahim made his share of big plays against New Mexico State. His night could have been even greater if not for an injury following a 74-yard run that forced him to leave the game.

Fortunately, Ibrahim was able to walk off the field under his own power. Even though his night was over, the redshirt freshman still racked up 101 rushing yards in his collegiate debut. If he is able to return soon, this could be a lethal running back duo with Ibrahim and senior Rodney Smith.

While expectations weren’t exactly high for Savannah State on Thursday, their issues in the passing game are startling. While plenty of teams struggled, the Tigers’ quarterbacks took things to a different level of ineptitude.

Sophomore D’Vonn Gibbons completed one pass attempt for 23 yards, while sophomore TJ Bell couldn’t complete any of his eight attempts. Together, the quarterbacks combined to throw more interceptions (two) than completions (one) and the Tigers finished with 1.35 yards per pass attempt.

Things have to get better from here for the Tigers, there’s essentially nowhere to go but up from this low point. Thursday just provided nightmares for anyone who likes even average quarterback play.