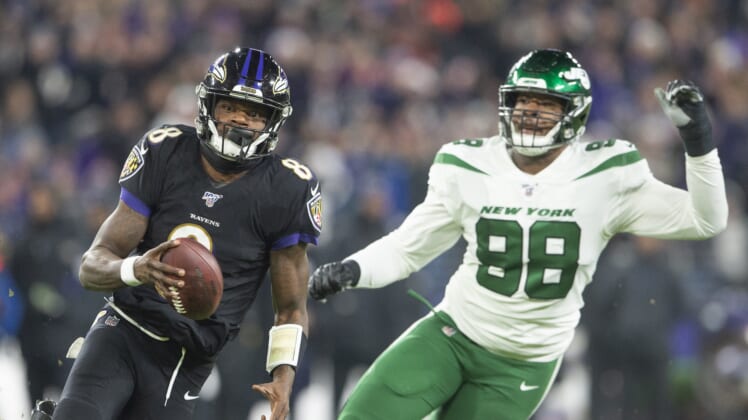 The Baltimore Ravens hosted the New York Jets to get NFL Week 15 kicked off on Thursday Night Football, and this game was predictably lopsided.

By the end of the first quarter, Lamar Jackson had already broken Michael Vick’s single-season record for most rushing yards by a quarterback. And in the process, his Ravens scored a couple too-easy touchdowns to take an early 13-0 lead.

That lead was stretched to 21-7 by halftime, and the Ravens led 35-7 after three quarters. Though the Jets did show signs of life in the fourth, the game still ended in a 42-21 blowout win for the Ravens.

These are the biggest winners and losers from the Ravens’ big win over the Jets on Thursday Night Football.

Winner: Lamar worth the price of admission

Michael Jordan. Serena Williams. Lionel Messi. These are athletes who are worth watching, no matter the stakes, and no matter the competition.

Lamar Jackson has entered into that realm as the quarterback of the Ravens in 2019.

Wowing the masses on Thursday Night Football, Jackson once again put on a show. He broke Vick’s single-season record on the game’s opening drive. Then he broke another NFL record, this time with his arm.

All told, Jackson completed 15-of-23 passes for 212 yards with five touchdowns and zero interceptions, rushed for 86 more yards while shredding yet another NFL defense in the process. The kid is doing things nobody before him has done. And the best part is, he isn’t close to reaching his ceiling.

Early on, Darnold and the Jets were doing some positive things on offense. Right before halftime, they had a chance to pull to within a touchdown with a score of their own. Instead, Darnold threw a brutal interception right into the arms of Ravens safety Chuck Clark just outside the end zone (watch here).

A play that could have potentially turned a blowout into a close game instead resulted in disaster for the Jets. They went on to open the third quarter with a three-and-out, lost fumble, three-and-out. By the time Darnold started getting into a groove again in the fourth quarter, the game was over.

When New York’s offense was grooving in the first half, it was often Jamison Crowder who provided the spark in the passing game.

He also provided one of the most amusing moments of the night when he followed up a horrible drop in the end zone with a very difficult catch for a score on the next play.

All told, Crowder hauled in six passes on 11 targets for 90 yards and two touchdowns.

Coming into Thursday night’s game, the New York Jets with the NFL’s second-best run defense, allowing just under 79 yards per game on the ground. The Ravens piled up 99 rushing yards…in the first quarter alone.

Baltimore finished the night with a whopping 218 yards and a touchdown on the ground against this defense.

To be fair to the Jets, nobody’s been able to really slow down Baltimore’s run game this year. Still, it was a bad night for the front seven of New York. Period.

Early in the fourth quarter, the Jets down 35-7, the New York special teams unit came up with a huge play.

Defensive lineman Tarell Basham powered through the line on a Ravens punt attempt, bowled over his man and put his arms up, blocking Sam Koch’s boot. From there, linebacker B.J. Bello recovered the ball and scored a defensive touchdown.

It’s plays like this that show the Jets are still playing with pride, even in a blowout like we saw on Thursday Night Football.

Barring a crazy turn of events in the next few weeks, it looks like the Ravens will finish the regular season with the No. 1 seed in the AFC, which is bad news for the rest of the conference.

Already a game ahead of the New England Patriots (with the tiebreaker due to their win over the Pats in November), the Ravens appear to be unbeatable right now. They’ve won 10 straight games, defeating the likes of the San Francisco 49ers and Buffalo Bills in recent weeks.

The road to Super Bowl LIV will go through Baltimore. That seems etched in stone. And besides an early-season hiccup against the Cleveland Browns, the Ravens are undefeated at home this season. Good luck with all that, AFC contenders.