Winners, losers from Patriots’ shutout victory over Jets on ‘MNF’ 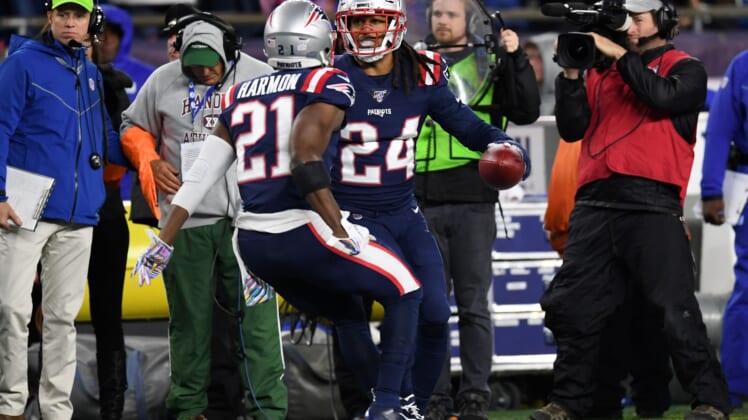 The New York Jets hosted the New England Patriots to cap off NFL Week 7 on Monday Night Football, but unfortunately, this game was over before it began.

It started on the game’s first drive. The Pats immediately put their stamp on the game with a 16-play drive that chewed up more than half the first quarter and ended with seven points.

The rest of the game was just more of the same. The Jets had no business on the same field as the defending champs, and in the end the Patriots walked out of MetLife Stadium with a 33-0 blowout win.

These were the biggest winners and losers from the Patriots’ dominant win over the Jets on Monday Night Football.

Tom Brady opened the game by going 9-of-10 for 64 yards on the game’s opening drive. And the one incompletion should have been caught. Instead, it bounced right off the facemask of Ben Watson, who just rejoined the team recently.

Despite playing without Josh Gordon and two of his tight ends, Brady had a decent night overall through the air. He finished the game with 249 yards on 31-of-45 passes with one touchdown and one interception.

Even though it wasn’t his finest hour, his flawless opening drive was all the Patriots needed to down the Jets.

Loser: Adam Gase did not have his team ready

In the lead up to this big game on Monday Night Football, we wrote that one of the biggest questions was whether Adam Gase could come up with a winning game plan.

The answer to that question was immediately evident. No, Adam Gase did not come up with a winning game plan. He also didn’t have his team ready to play.

The first quarter was a stunning illustration of this fact:

That was just the start of it.

During the opening minute of the second quarter, Sam Darnold was sacked and fumbled the ball. Kyle Van Noy pounced on it, and if not for an accidental foot-to-foot touch he would have walked into the end zone for a touchdown. Literally nobody tried going for the ball, or even bothered to try touching him while he was down on the ground. It was a stunning turn of events that showed how little the Jets players cared about the outcome.

The scoreboard speaks for itself, too.

Every week, the Patriots continue to do incredible things on the defensive side of the ball. Sam Darnold, who we’ll touch on individually here momentarily, admitted he was “seeing ghosts” while mic’d up on live television. Not a good look for the young man, but given the way the Pats have been treating opposing quarterbacks this year it’s not surprising at all.

New England’s defense confounded Darnold, created six turnovers, and it nearly had a defensive touchdown that was thwarted when Darnold intentionally swatted the ball out of the end zone for a safety.

Loser: Sam Darnold will be haunted by this game

The second-year quarterback had a grand total of 73 net passing yards on 11-of-32 attempts. He turned the ball over five times and threw some of the worst interceptions we’ve seen all year.

It was just a brutal performance by Darnold, who also clearly needs a ton of help up front. New York’s offensive line isn’t nearly good enough, and unless the Jets fix that going forward Darnold’s development will be stunted.

The Patriots struggled to gain yards on the ground against a very good Jets defensive front. They averaged just 2.2 yards per tote, and lead rusher Sony Michel only gained 42 yards on 19 carries.

Yet when it came time to grind out scores in the red zone, Michel was money. The second-year back out of Georgia scored twice from one yard out and once more from the three-yard line. Unfortunately, he got banged up late in the fourth quarter when he took a knee to his upper quad.

As we mentioned in the introduction to this article, this Monday Night Football game was over from the moment the Patriots took the ball on the opening snap of the game. There was absolutely no thrill to watching the Jets get their butts kicked on repeat for 60 minutes.

The only fans who could have possibly enjoyed Monday night’s blowout are those who devotedly follow the Patriots. For everyone else, it was three hours of our lives we won’t get back.