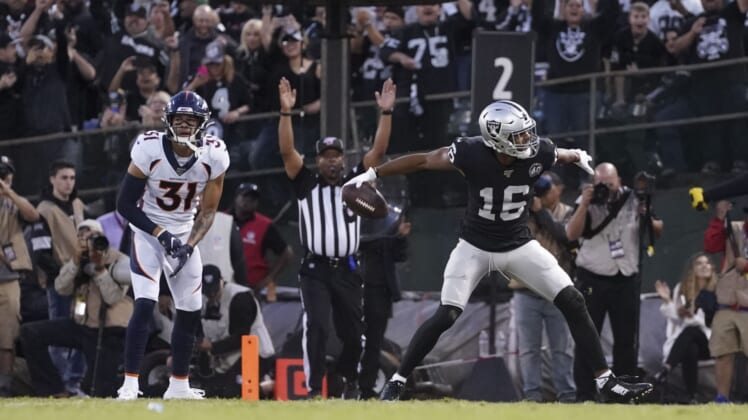 To celebrate the first week of the season, fans were treated to a “Monday Night Football” doubleheader that featured plenty of fireworks.

Early, it was the Houston Texans visiting the New Orleans Saints. This one proved to be an entertaining, see-saw battle all game long. It wasn’t until the last second ticked off the clock that we knew which team would win, as New Orleans eked out a 30-28 victory.

Late in the evening, the AFC West was on display with a rivalry game between the Denver Broncos visiting the famed Black Hole and the Oakland Raiders. To the delight of the home crowd, the Raiders dominated, winning 24-16.

These were the biggest winners and losers from the season-opening “Monday Night Football” doubleheader.

When the Texans lost Lamar Miller for the season with an ACL injury, it was easy to panic about the team’s ability to run the ball consistently. Then, Houston pulled off a trade for Carlos Hyde. That proved to be a savvy move, as the power back showed up huge in Week 1.

Hyde rushed for 83 yards on 10 carries, providing the thunder in Houston’s offense. Former Cleveland Browns back Duke Johnson provided the lightning, showing up with 57 yards on the ground. He also provided a spark in the pass game with four catches for 33 yards. The duo combined on 175 yards from scrimmage and appears to be a solid duo the Texans can count on going forward.

When Houston traded Jadeveon Clowney to the Seattle Seahawks for a pauper’s bounty, many wondered if the Texans could remain dominant up front without him. It was only one game, but on Monday it was pretty clear they won’t be the same.

In particular, star defensive end J.J. Watt was unbelievably unproductive. In fact, Watt didn’t register a single stat. Not one tackle. Not one quarterback hit. Not one pass defended. Nothing. Nada. Zilch.

Watt is too good to struggle like this all season. But perhaps he benefited from Clowney more than anyone realized. We’ll soon find out.

Last season, Saints receiver Michael Thomas had one of the most impressive statistical seasons any wideout has ever had in the NFL. He caught an absurd 85% of the passes that came his way to the tune of 125 catches for 1,405 yards and nine touchdowns. On Monday night, Thomas picked up right where he left off. Catching 10 passes on 13 targets, he racked up 123 yards and was the main weapon in Drew Brees’ arsenal all game long. Needless to say, he’s already living up to the monster contract he signed this summer.

Fantasy football players also once again rejoiced at the production of Alvin Kamara on Monday night. He’s such a dynamic weapon, and he’s among the best the NFL has to offer in terms of bang for your buck. That was on display against Houston as Kamara racked up the yardage. He piled up 97 yards on just 13 carries and another 72 yards on seven receptions. That’s an average of 8.45 yards per touch.

Deshaun Watson was sacked a league-leading 62 times last year and hit 125 times, and not surprisingly he got banged up quite a bit in the process. The Texans tried to fix this issue in the draft and then by trading for Laremy Tunsil right before the season began. But based on what transpired in Week 1 against New Orleans, this problem isn’t going away any time soon.

Hopkins was pummeled by the Saints. From the opening drive until the end, he took big hits in the pocket (and outside of it as well). Houston’s offensive line allowed six sacks and gave up 11 quarterback hits.

That puts Watson on pace to be sacked 96 times this year, and absorb 176 hits in the pocket. That’s not sustainable. And it’s going to get this young man hurt badly at some point.

The final minute of the Texans-Saints game was insanely fun to watch for anyone who is not a Houston fan. It was also one of the best things we’ve seen in sports for some time now.

Deshaun Watson made two of the best throws under pressure you’ll ever see and tied the game on a touchdown to Kenny Stills. Then, Houston kicker Ka’imi Fairbairn missed the extra point, only to get a second chance due to a penalty. He made the kick, putting the Texans up by one point with just 37 seconds remaining in the game.

That’s when Drew Brees marched the Saints 35 yards down the field in 35 seconds, setting up a potential game-winner from 58 yards out.

Wil Lutz stepped onto the field, took a deep breath, and then called game.

Talk about a dramatic ending.

The Broncos made a few nice pushes into to enemy territory against Oakland Monday night. They just couldn’t do much once they got into the red zone.

Four times, Joe Flacco had Denver in a position to score touchdowns inside the 20-yard line. Three times, the Broncos came up short. The only successful trip came late in the fourth quarter when the game was already practically over.

Rookie offensive coordinator Rich Scangarello struggled with the game plan. Flacco struggled to avoid pressure in key situations. The Broncos had one touchdown go right through their hands (literally), which we’ll get to in more detail later. Just an awful performance by Denver’s offense when it mattered most.

No Antonio Brown? No problem. The Raiders have plenty of offensive firepower, thanks to the emergence of ‘Hard Knocks’ star, tight end Darren Waller, free-agent acquisition Tyrell Williams, and rookie running back Josh Jacobs.

Waller was a tremendous go-to option for Derek Carr in the middle of the field. He came through with seven catches for 70 yards and appears to be a centerpiece on this offense going forward.

Williams did for Oakland what he’s been doing for the Chargers the past few years — make big plays down the field. He hauled in a gorgeous 43-yard pass and scored a touchdown, finishing with six catches for 105 yards.

Jacobs did an incredible job on the ground, rushing for 85 yards and two touchdowns. He also added 28 yards through the air.

Loser: Where was Denver’s pass rush?

Vic Fangio has been one of the NFL’s greatest defensive minds for well over a decade, and it was expected that his arrival in Denver would boost the Broncos’ already formidable defense. In particular, the duo of Bradley Chubb and Von Miller was expected to absolutely dominate this year.

That may still happen. Yet on Monday night, the duo was utterly quiet, and Derek Carr went through the game nearly untouched. Denver registered zero sacks, and Carr took exactly zero hits in the pocket.

That’s not what anyone expected to see.

When you think about Oakland’s defensive line, you probably don’t immediately think of veteran Benson Mayowa. Instead, guys like Arden Key and Clelin Ferrell spring to mind, and they will have huge roles to play in the future. But on Monday night, the journeyman veteran was the one bringing the heat on Oakland’s defensive front.

Mayowa registered two sacks Monday night. His career best came back in 2016 with the Dallas Cowboys when he had six on the season. He may just eclipse that, well before the midway point of the 2019 campaign.

Loser: DaeSean Hamilton will have nightmares about his dropped TD

Late in the third quarter, Denver was driving. Down by 11 points, they drove 68 yards and were in the red zone, apparently poised to really flip momentum to their side.

Joe Flacco threw a dart. It hit DaeSean Hamilton right in the chest. It was a gimme touchdown. And instead of making it a one-score game, Hamilton straight-up dropped the pass.

Hamilton had a miserable night overall as well, catching just 2-of-4 targets for five yards.

Talk about answering your critics. Carr has been under siege for his performance the past couple of seasons, and many have questioned whether the Raiders have any faith in his ability to lead the offense. It was a small sample size, but based on his performance Monday that’s not much of a question any more.

Carr was superb. He completed 16-of-17 passes for 178 yards and one touchdown with a 129.9 passer rating in the first half. The lone incompletion was a drop. He was a machine. Though he slowed down a bit in the second half, Carr remained mistake free and led two scoring drives in the fourth quarter.

In the end, Carr racked up 259 yards on 22-of-26 passing with a touchdown. Nearly flawless.