Winners, losers from huge Texans victory over Colts on ‘TNF’ 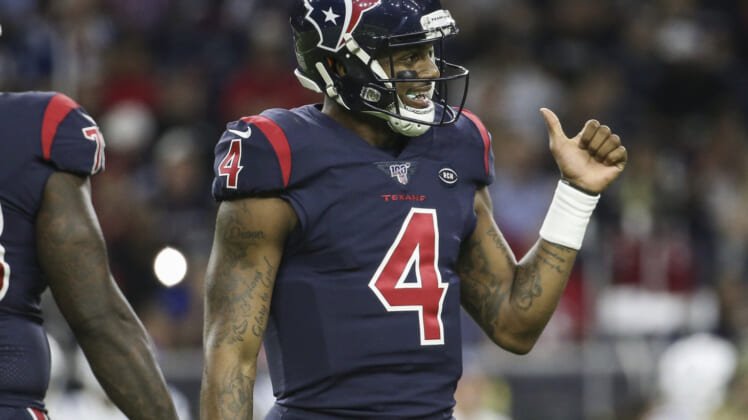 The Indianapolis Colts did battle with the Texans in Houston on “Thursday Night Football.” It was a huge game to start off the Week 12 slate with first place in the AFC South on the line.

Tied at 10 at the half, Houston’s offense came through with big play after big play in the second half. Deshaun Watson was on the money. His top receivers, DeAndre Hopkins and Will Fuller, did their thing.

On the other side, the duo of Jacoby Brissett and T.Y. Hilton struggled big time for Indianapolis.

These are among the biggest winners and losers from Houston’s gigantic 20-17 win over the Colts.

Getting the start Thursday night with Marlon Mack out for the foreseeable future, this former Buffalo Bills draft pick made it look easy against the Texans. He provided Jacoby Brissett with the balance the quarterback desperately needs on offense. That included a brilliant 13-yard touchdown run to put Indy up 17-10 in the third quarter.

These types of game-breaking plays open things up for Brissett and loomed large Thursday evening. The Arkansas product finished with 121 yards and 29 touches in the game. Outside of that one touchdown run, Williams wasn’t splashy. But he did provide a nice little boost.

Making his first appearance since suffering a calf injury back in Week 6, this four-time Pro Bowler was rusty as all get out Thursday evening. That included Hilton dropping a perfect pass from Brissett on a crucial third down with his team leading by four late in the third quarter.

As sure-handed as they come, it was downright shocking to see Hilton put this one on the ground. He repeated the feat in the fourth quarter, dropping yet another would-be first down on third down with Indianapolis down three.

Hilton ended up catching 3-of-6 targets for 18 yards. The Colts are going to need more from him moving forward as he gets healthier. That’s for sure.

Coming up big time and again. That’s what the Texans are going to need from their top skill-position player moving forward. It’s also what we saw at nearly every turn Thursday night.

Nuke hauled in 6-of-8 targets for 94 yards in Houston’s 20-17 win. That included touchdown catches of 35 yards and 30 yards, the latter of which was just amazing. When Deshaun Watson and Hopkins are connecting at the clip we saw against Indianapolis, this offense is nearly unstoppable.

Hooker has been brilliant throughout his two-plus seasons in the NFL, playing at a Pro Bowl level during that span. But playing free safety in this league can expose a player. One bad play can make the difference in a game.

We saw that first hand Thursday night against the Texans. The former first-round pick was burnt big time by star Texans receiver DeAndre Hopkins on a 35-yard touchdown in the second quarter to give Houston a 10-7 lead.

We’re not too sure what angle Hooker was taking here. It’s certainly not standard operating procedure for one of the game’s best cover safeties. And it cost Indy big time.

After struggling early at home Thursday night, this youngster stepped up big time when it counted the most. Watson connected on four passes of 30-plus yards throughout the game.

The third-year quarterback also completed 13-of-19 targets to Houston’s top two receivers for 234 yards with two touchdowns. All said, Watson went for 298 yards and missed on just 11 of his 30 attempts. That’s some elite stuff after major struggles in a blowout loss to the Baltimore Ravens last week.

Holding on to the ball too long. Not anticipating where receivers are. Struggles in the pocket. Issues that Brissett had earlier in his career came back to haunt the quarterback once again Thursday night.

In what might have been his worst performance of the season, Brissett went for just 129 yards on 25 pass attempts. Sure drops from his receivers didn’t help here. But an inability to throw the ball down field cost Indy in a 20-17 loss.

Enigmatic. That would be the best way to describe this former first-round pick’s career. When he’s not injured, Fuller has flashed brilliance at times. He’s also struggled big time with drops.

Both of those latter two things rung true Thursday night. Sure Fuller dropped two passes, but he also hauled in two absolutely huge passes from Watson to move the chains.

Fuller finished the evening catching 7-of-11 targets for 140 yards. This is the big-play ability he brings to the table. It can also make Houston’s offense unstoppable. Now, can he stay consistent?

A lot was made following last week’s game of the pass-protection issues we’ve seen from Houston’s offensive line. After all, Watson was sacked six times in a blowout loss to the Ravens and has been taken down 93 times in his past 26 starts.

Justin Houston and Co. failed to take advantage of this weakness. Indianapolis sacked Watson just one time and failed to consistently pressure him throughout the game.

Correlation and causation. Without pressure in his face, Watson was able to connect with his top receivers on big pass after big pass. That was the Colts’ downfall Thursday night.