Winners, losers from Bears’ big win over Redskins on ‘MNF’ 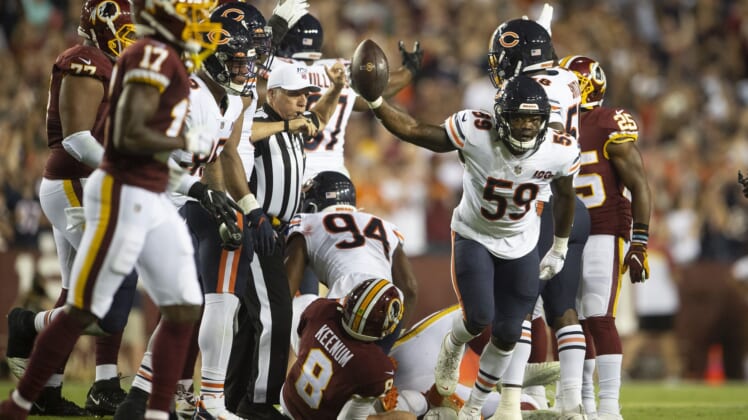 The Chicago Bears went to our nation’s capital and ran the Washington Redskins out of their own building on “Monday Night Football” in Week 3.

The big plays started early, as Chicago’s dynamic defense scored a touchdown on Washington’s opening drive. The end result was a 31-15 win that helped the Bears improve to 2-1 on the season and caused one unlucky person to lose out on the chance to win $500,000 on an 89-cent wager.

Here’s a look at the biggest winners and losers from the Bears’ big win over the Redskins on “Monday Night Football.”

On just the third play of the game for Washington’s offense, Clinton-Dix showed up big with his first interception as a member of the Chicago defense. Pouncing on an overthrow by Case Keenum, he made the interception and ran it back 37 yards for the touchdown.

This pick-six set an early tone. It was a resounding signal that the Chicago defense that was so feared last year was going to be a problem for Washington all night long.

As it so happens, Clinton-Dix wasn’t content with just one huge highlight, either.

Chicago signed Clinton-Dix on the cheap this offseason. Needless to say, he’s working his way toward a huge extension.

In all fairness to Keenum, Washington’s offensive line was a train wreck, and the Bears were able to do pretty much everything they wanted to disrupt the quarterback in the pocket. With that caveat in place, the mistakes Keenum made were inexcusable.

We already covered the pick-six, which was the result of an awful throw by Keenum. He had time and simply overthrew his receiver. Keenum’s second interception of the first half was also the result of a poor throw, and so was his third — right into triple coverage. He was also sacked XX times, fumbled twice and lost a fumble.

Then, as Washington had momentum midway through the fourth quarter, Keenum did this:

Keenum finished with 331 yards and two touchdowns on 30-of-43 passing. But he turned the ball over five times. The Redskins dropped to 0-3, and his play had a lot to do with loss No. 3.

Going against a bad offensive line Monday night, this Bears star feasted. In the game’s first 20 minutes, he had already racked up a stat line any player would be proud to have for an entire game.

Then, he upped the ante. Mack came flying off the edge once more and sack-stripped Keenum for his second official forced fumble of the game, creating Chicago’s third turnover of the game.

Loser: Jay Gruden did not read the room

With Keenum being blown up seemingly every play, the logical thing would have been for Washington to attempt running the ball a bit more. That didn’t happen. Keenum dropped back to pass 43 times. He was under pressure well over half the time he dropped back and endured four sacks for a loss of 44 yards.

Adrian Peterson attempted just 12 runs in the game. He was seen on the sideline with his offense in the red zone in the fourth quarter, very upset that he wasn’t in the game. Chris Thompson, who had the most success in the run game for Washington, had just seven attempts. The disparity between runs and passing attempts was staggering. Gruden has a penchant for abandoning the run game. He did it on Monday night. And it hurt his offense, not to mention his own job security.

There wasn’t a ton of offense to be had by either team in the first half. But when the Bears needed a big play, it was the diminutive Gabriel who came up huge.

Having already scored two short touchdowns earlier in the game thanks to some outstanding schemes drawn up by head coach Matt Nagy, Gabriel made the offensive play of the night late in the second quarter.

The former undrafted free agent out of Abilene Christian finished the game with six catches for 75 yards, and of course the three key touchdowns. Unfortunately, he suffered a concussion in the second half and was unable to add to his totals.