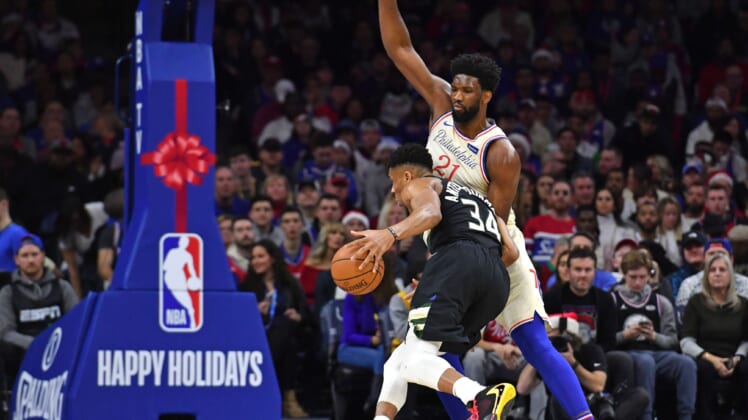 A battle between Giannis Antetokounmpo and one of the NBA’s best lineupsblew past expectations. Philadelphia’s starting five started unleashing from the three-point line, with Joel Embiid leading the way in an unfathomable first-half performance.

The NBA’s reigning MVP winner encountered a defensive intensity that he hasn’t often seen this year. Milwaukee relies on its star to carry the team and with Antetokounmpo struggling, especially from deep, the Bucks were repeatedly run over on Wednesday.

Here are the winners and losers from Philadelphia’s dominant 121-109 victory over Milwaukee on Christmas Day.

Milwaukee came into this game with a plan to stop Embiid – force the All-Star center to beat them from deep. He did just that with his best first-half performance of the season, erupting for 23 points, seven rebounds and three three-pointers in 15 minutes.

He looked like the NBA’s most unstoppable player and his early success opened things up for his teammates to drill open shots. It didn’t take long for Embiid to record another double-double and he also displayed outstanding defense against Antetokounmpo. If we see this version of Embiid more consistently, this becomes the best team in the conference.

Needless to say, Milwaukee’s plans for Christmas Day didn’t work. It challenged the 76ers to rely on the three-point shot, so that’s exactly what they did. Philadelphia came into the day averaging 10.8 three-pointers made per game and it drilled 11 in the first two quarters alone.

Once the shots from deep started falling, the Bucks tried to adjust and everything fell apart. The Bucks led the NBA in average point differential (13.4), yet found themselves down 21 at halftime. A team that lost just twice since Halloween, both by single digits, got steamrolled on Christmas.

The 76ers let it fly from beyond the arc on Wednesday and Richardson’s efforts especially stood out. Philadelphia’s 26-year-old two-way guard provided the perfect three-and-D performance in its blowout win.

Richardson made four three-pointers, displaying his range from deep early and also finding ways to get others involved. He also came up huge on the defensive end with two steals, a block and some shutdown moments. If he can start becoming a more efficient shooter, the sky is the limit for Philadelphia’s starting five.

Antetokounmpo didn’t look right before the game, taking extra time to stretch out his back on the court. When the game began, became even more difficult against Philadelphia’s suffocating defense.

He struggled to find a good shot throughout the game. Antetokounmpo missed all seven of his three-point attempts and encountered Embiid’s defense whenever driving to the bucket. While he finished with 18 points, 14 rebounds and seven assists, he shot 8-for-27 and that proved costly on Wednesday.

It’s been said throughout the season, especially in the past month, that Philadelphia needs more consistent shooting from outside. We saw Harris provide just that on Christmas and it made all the difference.

The floor opens up more when Harris is drilling shots from deep. He hit five-of-seven three-pointers, dropping 22 points and creating the spacing the 76ers needed. We already knew this team could play great defense, it led to Antetokounmpo’s poor performance. It’s the outside shooting that can make this team a championship contender.