With the New York Yankees 8-4 over over the Minnesota Twins in Tuesday’s American League Wild Card Game, the MLB playoffs are officially underway.

Tuesday’s game provided many winners and losers beyond the final score.

In the first inning of the game, it was clear that one team would be a winner without even playing in this one. The Yankees bullpen saved the team from disaster. But one performance stood out above most. Obviously, more than a few Twins stood out in a bad way. Still, the starting battery really grabbed our attention. And despite all of that, the biggest loser of the night never took a step between the lines.

These were the biggest winners and losers of Tuesday’s American League Wild Card Game.

From very on early in this one, it was clear that the Indians were going to be a big winner on Tuesday night. Starting pitchers Luis Severino and Ervin Santana lasted a combined 2.1 innings. While the Yankees didn’t have to exert their bullpen too much, Chad Green, David Robertson, and Tommy Kahnle were all called all to pitch two innings or more — well beyond what we’d normally see them throw.

The Wild Card Game winners already faces a pretty hefty uphill battle in the LDS. It’s hard enough to beat your league’s No. 1 seed in a best-of-five series. Additionally, the starting rotation of the Wild Card winner is turned on its head, with the No. 1 starter going in the Wild Card Game.

Consider all of those challenges that the Yankees (or Twins) was already going to have to deal with when trying to beat a 102-win Indians team. Now, add the fact that at least a few members of the bullpen are going to be unavailable or exhausted come Game 1 on Thursday.

The starting pitcher already faces a great deal of pressure in a playoff game. But in Game 1, New York’s will be under even more in trying to get through at least five or six innings.

Cleveland’s playoffs haven’t even started yet. But things are already shaking up pretty well.

In each of his three at-bats, the Minnesota catcher came to the plate with men on base. On every one of those occasions, Castro was sent packing with a strikeout.

The strikeout is sometimes overblown as a negative stat. When nobody is on base, it doesn’t really matter if you strike out, ground out, fly out, or anything else. An out is an out.

But with men on base, putting a ball in play is important. If nothing else, make the defense make the plays to get you out. With a true power hitter, we may be able to bend that rule a little. But with someone like Castro, expecting him to put the ball in play is not too much to ask.

Now, to be completely fair, Castro is not out there for his bat. His reputation has always been as a glove first catcher. Unfortunately, as New York’s eight runs will tell you, that didn’t work out too well, either.

It was not a good day for Minnesota’s backstop.

The top of the first inning was disastrous for the Yankees. But if not for Green, it could have been much worse. Already trailing 3-0, Green entered the game with runners on second and third with only one out in the first. By all rights, it should have 4-0, 5-0, or even worse by the time New York finally got back to the dugout. It wasn’t.

Green struck out Byron Buxton and Jason Castro to escape the jam.

Minnesota’s first inning against Yankees’ starter guaranteed that New York would be in a hole before it got up to the plate. Still, with the Yankees’ lineup, 3-0 is a deficit that can be overcome. Much more than that would be a tall task.

By the time he began to leak oil at the end of his outing, the game was much different than it was when he entered. Green deserves a massive amount of credit for putting out a rather serious fire to prevent an early inning knockout.

Despite his poor history in Yankee Stadium, Santana sure had a lot of confidence before this one started.

His arm just couldn’t match up.

Santana was given a 3-0 lead before ever taking the mound. As a starting pitcher, you simply can’t ask for much more than that. But four hitters into Santana’s outing, Didi Gregorius launched one into the right field stands to tie the game.

Quite frankly, a veteran starting pitcher has to be better than that. An inning later, New York was leading.

If the Yankees chipped away at this lead over the course of several innings, we’d be a little more understanding. But Santana was given a pretty solid gift from his offense and he couldn’t even keep that intact for more than one out. 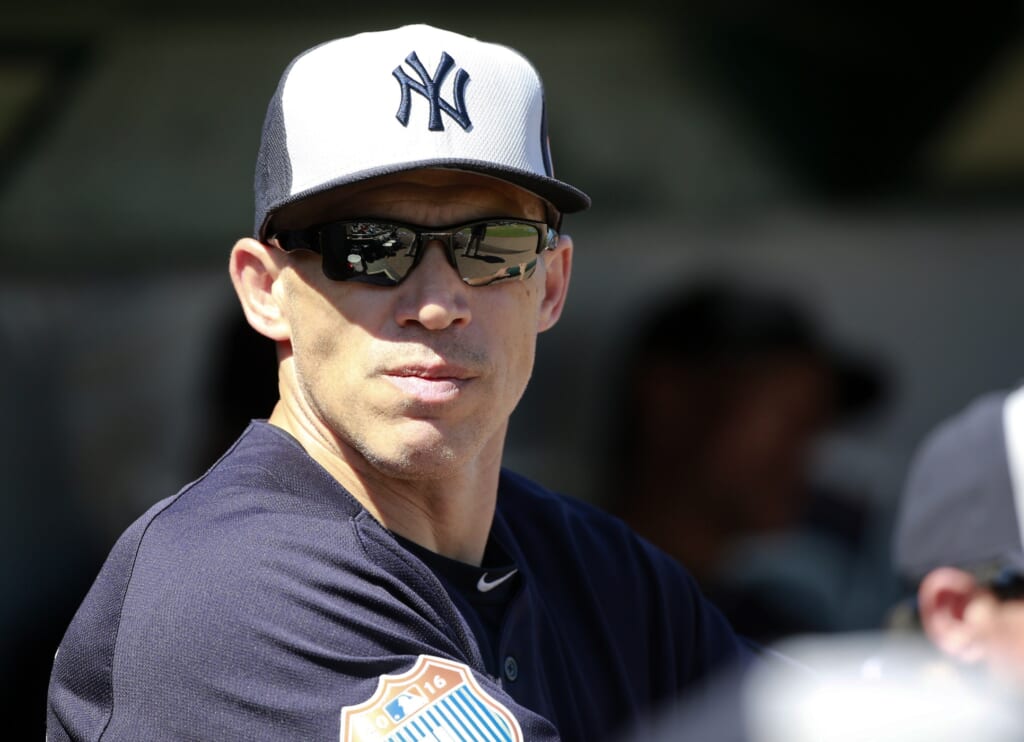 The Yankees’ skipper gets the nod for a few reasons.

First of all is how well he managed the pitching staff. He knew when to get Severino out of the game. He knew who to put in and just how far those guys could go. Managing a bullpen is huge in the playoffs and on Tuesday, Girardi did that as well as could possibly be expected after having to take the ball from his starter in the first inning.

He also put together a strong lineup, especially at the top. Lead off hitter Brett Gardner homered, as did No. 2 hitter Aaron Judge. Those both came after the aforementioned first inning blast from Gregorius that tied it. He put out the lineup that gave the Yankees the best chance to win.

Managers are often heavily criticized for their actions in the playoffs. But in this case, we have to give credit where it’s due. Girardi pressed all of the right buttons.

We also have to wonder if Girardi might want to reconsider his stance that the Wild Card Games should be a best-of-three series. Would he really want to have to win one more after that game?

This broadcast was just terrible.

The commentary of Dan Shulman, Aaron Boone, and Jessica Mendoza will earn some criticism. Everyone’s entitled to their opinions but really, those three aren’t our focus here. As far as we’re concerned, the announcers were fine.

Unfortunately, they were awfully difficult to hear far too often. The volume on their microphones was inconsistent. The microphones were obviously too close to the fans because far too often, noise from the crowd drowned out the announcers.

And as bad as that was, it was nothing compared to how poor the cameras were.

The camera work too often resembled a father recording his son’s little league game with a cell phone camera. We may be able to cut some slack for a spring training broadcast but for a playoff game? That was amateur hour.

ESPN, you call yourself the Worldwide Leader. Your broadcasts need to reflect that.