Winners and losers from Week 2 of the NFL preseason

Week 2 of the NFL preseason is officially in the books. We learned a lot more about where certain players and teams are headed than during the initial weekend of action.

A young quarterback in Dallas continued to dominate the summer slate, proving he might very well be worthy of playing time here soon.

Meanwhile, a veteran signal caller in Denver legitimately fumbled away an opportunity to separate himself in the team’s quarterback competition.

These are among the biggest winners and losers from Week 2 of the NFL preseason.

Another ridiculous night from @15_DakP.

This rookie mid-round pick has been dazzling in two preseason appearances. After starting for Tony Romo against the Los Angeles Rams last week, Prescott came in following two possessions against the Miami Dolphins. He didn’t disappoint.

The Mississippi State product completed 12-of-15 passes for 199 yards with two scores. He added 28 yards and two scores on the ground. All said, Prescott led the Cowboys to scores on six consecutive possessions.

The rookie’s performance thus far this summer has led the Cowboys to potentially believe he can act as Romo’s primary backup following the season-ending injury to Kellen Moore.

That’s some rather big news considering just how bad the team’s quarterback situation was minus Romo last season.

Landry Jones was absolutely atrocious starting for a resting Ben Roethlisberger on Thursday. He threw four first-half interceptions, completing just 12-of-20 passes for 111 yards in the process.

We all know Big Ben will be under center when the regular season comes calling. We also know that short of his right arm being severed from his torso, the tough quarterback will find himself playing through injury.

With that said, Roethlisberger has missed starts in all but three of his 12 seasons in the NFL. Should he be sidelined for an extended period of time during the regular season, Pittsburgh will be in grave danger of missing the playoffs.

Jones obviously isn’t the answer. Neither is Dustin Vaughan. It’s in this that the Steelers may have to look at the watered-down free-agent market for a quarterback. Heck, maybe a reunion with Michael Vick could be in store. 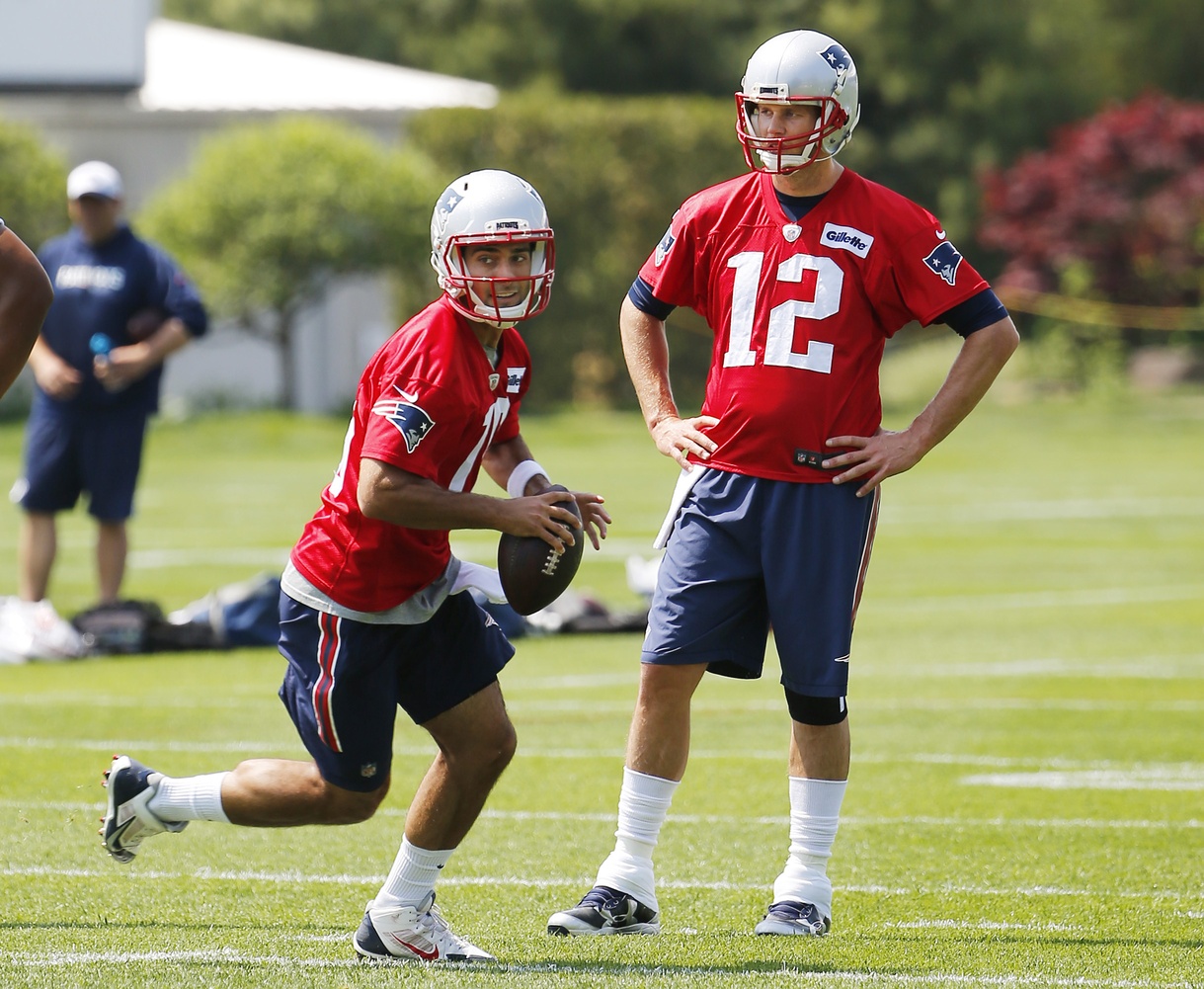 The Dion Lewis injury news isn’t good. Now that last year’s breakout player is again lost for an extended period of time, the Pats’ running back situation is as questionable as ever. Add in the four-game suspension Tom Brady must serve to start the season, and there’s a ton of questions here.

Though, the overriding takeaway from New England’s first two preseason games has to be the performance of third-year quarterback Jimmy Garoppolo. He has completed 27-of-39 passes for 349 yards without an interception in two games.

Thursday night against the Chicago Bears saw the former second-round pick complete 16-of-21 passes for 181 yards with a touchdown. He also led the Patriots to three second quarter scoring drives.

More than the simple stats, it has to be an encouraging sign to see Garoppolo play at a high level in the context of the Patriots’ normal offense. This is to say that they aren’t changing what they do with Brady sidelined.

That could be relatively big news as the team faces the first quarter of the season without its star signal caller.

Karlos Williams released. Marcell Dareus in rehab. Sammy Watkins still sidelined. These are three major issues for the Bills as they enter a 2016 season that has playoff expectations written all over it.

Williams dealt with conditioning concerns throughout the spring before being hit with a four-game ban for violating the league’s substance abuse policy (more on that here).

With Williams now gone, the recently signed Reggie Bush will likely act as Buffalo’s primary backup running back. Considering the injury-plagued path his career has taken recently, that’s most definitely not a good sign. Now add in McCoy’s recent bout with injuries, and running back could be a concern in Western New York this season.

More than that, the continued injury issues surrounding Sammy Watkins has to be of utmost concern. When he’s healthy and on the field, Watkins is one of the most dynamic receivers in the game.

Now, months removed from off-season foot surgery, Watkins has yet to take part in a preseason game. It surely is going to be important for him to get at least one tune up in before the regular year. If not, he could start slowly out of the gate.

On the other hand, there’s absolutely no telling when former Pro Bowl defensive tackle Marcell Dareus will be back. The stud run stuffer was suspended for the first four games of the 2016 season for violating the NFL’s substance abuse policy. He then checked himself into rehab.

Depending on how long Dareus is out, the Bills defense could take a major hit. He’s the anchor of the team’s defensive line and one of the most talented players at his position in the NFL.

Griffin III may have had an up-and-down performance in his debut with Cleveland last week. Though, he followed that up with a tremendous outing against the Atlanta Falcons Friday night.

Griffin III surely is looking comfortable in Hue Jackson’s offense. More than that, he’s looking much like the player that took the NFL by storm as a rookie back in 2012. This could be some huge news for a desperate Browns organization.

There’s absolutely no reason Sanchez should still be engaged in a preseason battle with two inexperienced quarterbacks for the Denver Broncos starting job. Sadly, for both the team and the veteran quarterback, he’s been terrible in the preseason.

Sanchez lost two fumbles within the matter of minutes at the end of the second half on Saturday night. He also took three sacks while racking up just 120 yards on 17 pass attempts.

This came at a time when the Broncos decided to give second-year quarterback Trevor Siemian an opportunity to start against the San Francisco 49ers. Unfortunately for the Broncos, Siemian’s performance included a pick six after he led the team to a touchdown on the opening drive (watch here).

That gave Sanchez a real opportunity to separate himself from his less experienced counterpart. In reality, that simply didn’t happen, as Sanchez looked the part of a green quarterback himself and lamented his mistakes afterwards.

Signed off the street after some major injury issues at quarterback in San Francisco, Ponder took to the field in Denver on Saturday night. Even with a watered-down playbook and only a few days in Chip Kelly’s system under his belt, the former first-round bust impressed big time.

With Colin Kaepernick still sidelined due to a dead arm and Thad Lewis on injured reserve, there’s a real opportunity for Ponder to make the 49ers’ 53-man roster. If that were to happen, he’d potentially be one poor Blaine Gabbert performance from starting.

It truly is a stunning change for a quarterback that acted as nothing more than training camp fodder for the Oakland Raiders last season. Whether it translates to the regular season is anyone’s guess.

What we do know is that Ponder performed at a high level Saturday night against Denver, completing 7-of-8 passes for 86 yards and a score. He also added a 22-yard touchdown run. It will surely be interesting to see how he performs over the final two games of the preseason. 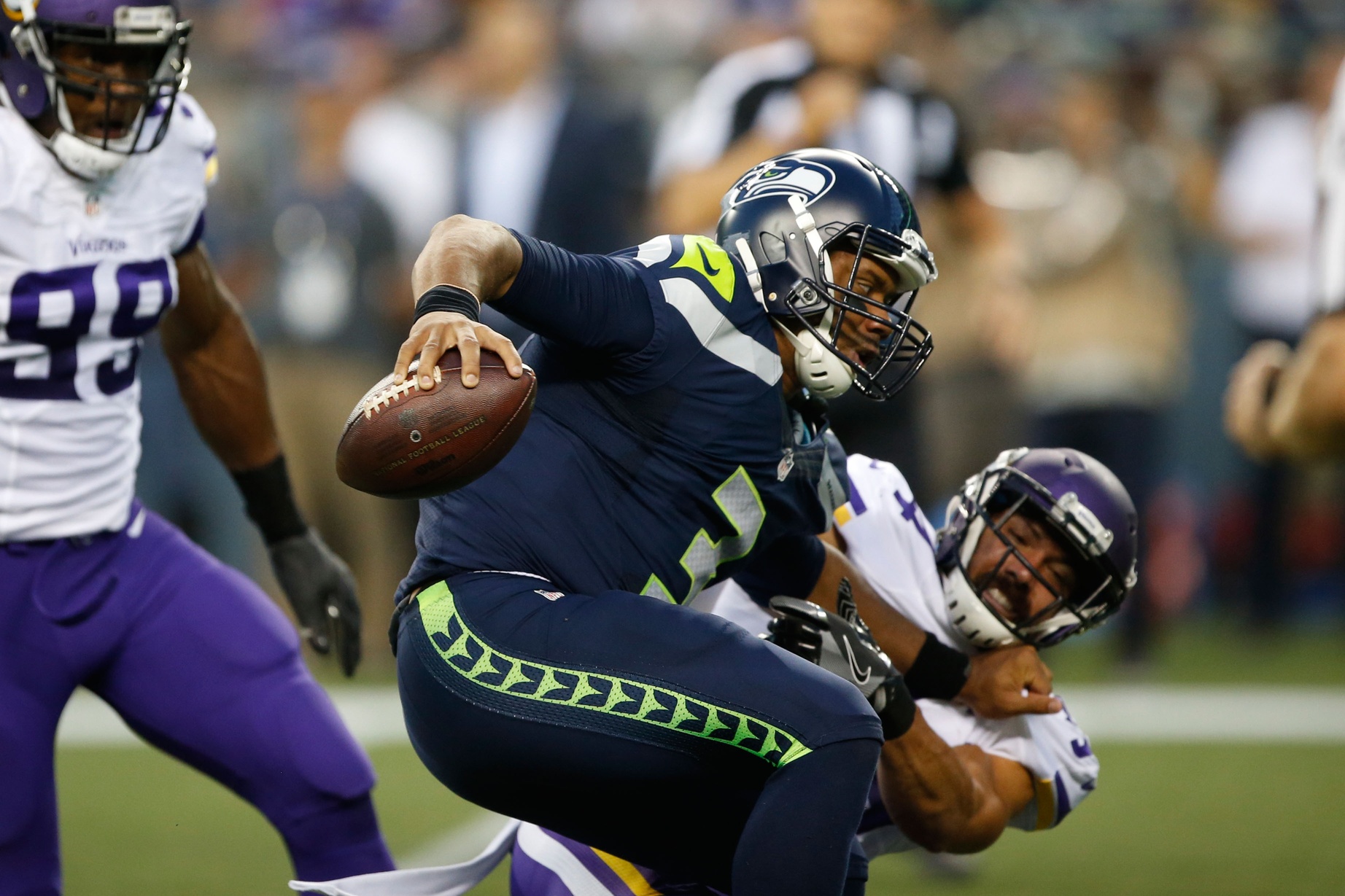 At this rate, Russell Wilson is going to be roadkill by the end of the season. In reality, the lack of pass protection he’s seen during the preseason could be Seattle’s undoing this year.

All said, Wilson was sacked four times on just 15 drop backs against the Minnesota Vikings. Though, Seahawks head coach Pete Carroll placed some of the blame on his quarterback.

“I know you’re looking at the sack numbers and you’re thinking, ‘Oh geez, what’s that mean?’ We got covered up a couple of times and we didn’t get the ball out,” Carroll said after the game. “We need to throw the ball away and get rid of it so we don’t take the big plays. Russ can do a better job to help us there when we get stuck.”

Either way, this is something to definitely keep an eye on heading into Seattle’s third preseason game. Wilson will likely see a half of action, enabling us to acquire a better understanding of where his protection is at.