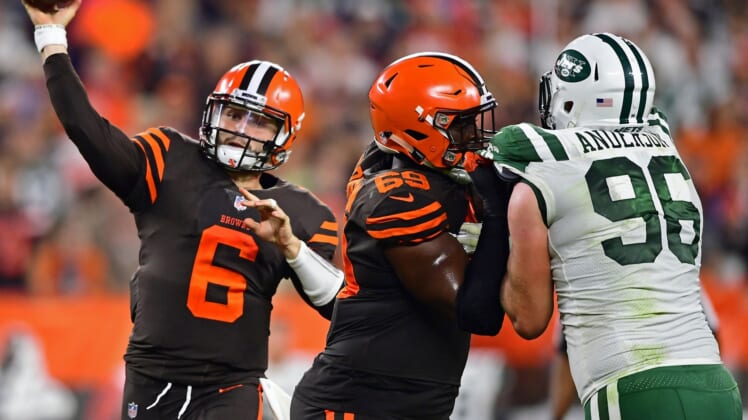 The streak is over. For the first time since Christmas Eve of 2016, the Cleveland Browns have won a regular season football game.

Thursday’s outing against the New York Jets started out in typical fashion with Cleveland finding itself in a 14-0 hole. That’s when rookie No. 1 pick Baker Mayfield led the team back in a stirring performance.

From a Jets perspetive, this loss has to hurt in a big way. Rookie quarterback Sam Darnold came up small in defeat. Meanwhile, New York’s defense couldn’t do a thing to contain Mayfield and Co.

Here are the biggest winners and losers from Cleveland’s resounding home win over the Jets on Thursday Night Football.

Garrett’s ability to get into the backfield against a rookie quarterback kept Sam Darnold on edge all night long. An early sack of the first-year signal caller led to issues in the pocket all game long.

Ultimately, Darnold would go on to complete 15-of-31 passes for 169 yards with two interceptions in his worst performance as a pro. Certainly, Garrett played a major part in this. It’s this type of edge-setting prowess that Cleveland figured it was getting in the defensive end when it selected him No. 1 overall last year. Now through three games, Garrett has three sacks and two forced fumbles.

With his team backed up at its own 25-yard line late in the game and down by four points, Bowles decided it made sense to go for it on fourth-and-10. While Darnold did complete the pass to move the chains, the quarterback threw an interception one play later.

This set up Cleveland deep inside Jets territory and enabled the team to pin New York back.  As the Jets’ final drive came to a conclusion after another Darnold interception, one has to wonder what would have happened if Bowles decided to flip the field. He didn’t. And we’ll never know.

Leave it to a special teams ace to find himself as a winner during what was an otherwise ugly football game for the Jets. This fifth-year veteran recorded a blocked punt for the Jets late in the first quarter, leading to the first points of the game. It was a clean block from Pierre-Louis. A few plays later, former Browns running back Isaiah Crowell scored on a touchdown run.

It’s these type of game-breaking plays on special teams that can’t be taken for granted. The Jets had put up 14 total yards and one first down up to that point in the game. This should have jump started the team in a big way.

It couldn’t have gone much worse for Taylor in front of his home crowd Thursday evening. Prior to exiting the game with a concussion, the former Pro Bowler was absolutely brutal. He completed 4-of-14 passes for 19 yards while being sacked three times. In fact, Taylor put up negative-three net passing yards in nearly two full quarters of action. His night included an overthrow of Antonio Callaway on what should have been a touchdown and a horrible intentional grounding with Cleveland nearing field goal position.

Now that Baker Mayfield replaced Taylor and performed darn well in the process, it’s not yet known whether the veteran will retain his starting job for Week 4. Either way, his performance was historically bad in front of a national audience Thursday night.

We’re not going to give Crowell too much crap for the running back’s exploits in front of his former home crowd Thursday night. What he did on the field to help a struggling rookie quarterback was exceptional. Crowell opened the scoring with a seven-yard touchdown to start the second quarter and doubled up with another score in the first half to give New York a 14-0 lead.

The veteran free agent signing now has four touchdowns on the season. He put up a grand total of two with the Browns in 2017. He’s also playing at what we’d call a Pro Bowl level at this early point in the season.

Rookie struggles are expected from the quarterback position. After throwing two costly interceptions in a loss last week, Darnold’s issues continued on the road against a good Browns defense on Thursday. Making just his third regular season start and second on the road, the USC product completed 15-of-31 passes for just 169 yards without a touchdown and two interceptions.

Both of Darnold’s picks came late in the fourth quarter with his Jets attempting a comeback. He struggled with accuracy and decision-making through the game, ultimately leading to New York falling by the score of 21-17.

Taking over for a Browns offense that seemed to be dead in the water with Tyrod Taylor slinging the rock, Mayfield provided new life in his regular season NFL debut. The reigning Heisman winner was as advertised, displaying the elite playmaking ability that made him such a stud in Oklahoma.

It led to a resounding win in front of the home team. All said, Mayfield completed 17-of-23 passes for 201 yards en route to leading Cleveland on four scoring drives in just over a half of football. He was pumped. Fans inside FirstEnergy Stadium in Cleveland didn’t know what to do with themselves. Those watching at home were at a loss. It was a great scene for Mayfield and his long-downtrodden squad.

By virtue of Cleveland’s win Thursday night, there’s a darn good chance that Pittsburgh will head into Week 4 in the AFC North cellar. This comes after Ben Roethlisberger and Co. fell to the Kansas City Chiefs last Sunday. It also comes following a Week 1 tie against these very same Browns.

Should Pittsburgh lose to Tampa Bay on Sunday Night Football and other things fall into place, this team could very well be in last place. As it is, Cleveland’s win changes the dynamic in the division. We’re talking about a team at .500 heading into late September. Who would’ve thought?

This first-year player is certainly putting his hat in the ring for Defensive Rookie of the Year. After intercepting Ben Roethlisberger twice in his NFL debut back in Week 1, Ward’s playmaking ability was on full display Thursday against the New York Jets.

Not only did Ward hold Robby Anderson to 22 yards on four targets, he legitimately stole the ball from the Jets receiver on one of his two catches. It stalled a drive and gave Cleveland enough momentum to come out on top. Teaming up with Myles Garrett, the Browns have an elite-level young tandem on defense. That’s for sure.

Anderson came up small for his rookie quarterback Thursday, catching just 2-of-4 targets for 22 yards. It’s this level of inconsistency that has plagued the wide receiver throughout his young career. And it came home to roost big time here.

The bigger issue was ball security. With his Jets boasting an 11-point lead in the third quarter, Anderson lost a fumble. It ultimately flipped field position and gave Cleveland the momentum to earn that rare win. For this, Anderson has to be considered a major loser. It’s also his second consecutive game with a lost fumble.