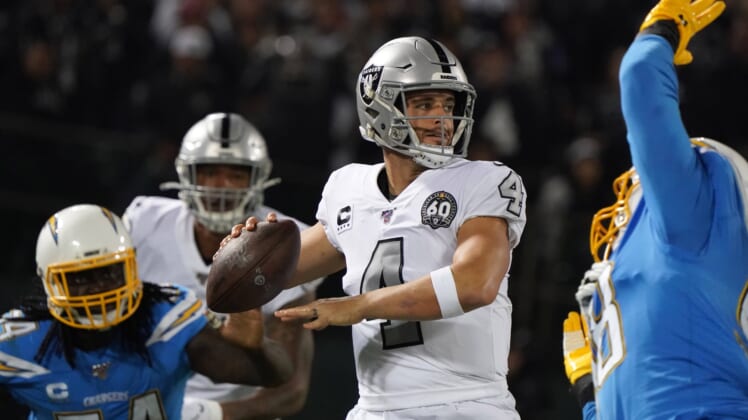 The Los Angeles Chargers headed to Northern California to take on the Oakland Raiders Thursday night in a huge AFC West contest.

Winners of two consecutive, Los Angeles needed another victory to remain alive in the playoff race. The Raiders entered Week 10 with a surprising 4-4 record and just a half game behind Kansas City in the loss column.

What was a mistake-filled game in Oakland culminated in a thrilling 26-24 comeback win for Derek Carr and the Raiders.

Here’s a look at the biggest winners from this all AFC West matchup on “Thursday Night Football.”

Following a brilliant outing against the Green Bay Packers last week, Gordon needed to continue his stellar play. A holdout throughout the first several weeks of the season, he had in the past come up small when the Chargers needed it the most. In no way did that come to fruition Thursday evening.

The Pro Bowl back ran through Oakland’s defense in the first half, putting up 71 yards on 15 attempts. He was a catalyst on the team’s first scoring drive that lasted 16 plays and resulted in a touchdown. When all was said and done, Gordon gained 133 total yards on 23 touches in the narrow loss.

Once Russell Okung left the game in the first half, it became apparent that the Chargers’ offensive line would struggle in this one. This unit was then playing with two backup offensive tackles.

This is exactly what transpired. Philip Rivers was sacked five times and hit a total of 10 times throughout the game. Trent Scott struggled big time at right tackle. The end result was Los Angeles’ offensive line yielding five sacks to a defense that had recorded just 15 in eight games heading into Thursday night.

A former small-school undrafted free agent, Harris already jumped on to the scene earlier this season with a pick-six off Colts quarterback Jacoby Brissett back in Week 4. The youngster was back up to his old tricks Thursday, picking off Philip Rivers two times in the first quarter. The first one set up a field goal. The second one? Well, Harris returned it for a touchdown and a 10-0 lead.

Harris continues to act as a major play-maker in a revamped Raiders secondary. He finished Thursday night with three passes defended and those two picks. It was definitely needed given Oakland’s youthfulness at corner.

We can’t place all of the blame on Mr. Rivers here. He was under pressure throughout the evening. Given the veteran’s lack of mobility, that’s not normally a recipe for success. Even then, Rivers’ struggles this season continued against what was a league-worst pass defense heading into Week 10.

The future Hall of Famer completed 17-of-31 passes for just 207 yards while throwing three interceptions. He also fumbled the ball and was sacked five times. It was not a banner performance for Rivers in what will be his final career game in Oakland.

The level of inconsistency we’ve seen from this rookie No. 4 overall pick through the first half of the season was glaring. Already seen as a major reach, Ferrell needed to produce against the Chargers’ third-string left tackle Thursday evening. Despite some bad penalties in the first half, that’s exactly what he did.

The Clemson product recorded eight tackles, three quarterback hits and 2.5 sacks in a downright dominant performance. He was one of the primary reasons that Rivers struggled with pressure in his face. This is going to be a huge thing moving forward for the Raiders.

Bosa was shaken up a bit early in this one, but he remained in the game. At a time when Los Angeles needed the Defensive Player of the Year candidate, Bosa came up extremely small.

He was pretty much manhandled by Raiders left tackle Trent Brown throughout the game. The Pro Bowler recorded all of two tackles and one quarterback hit after tallying 8.5 sacks in his first nine games.

After struggling through the first three quarters of the game, Carr came up big time for the Raiders when they needed him. Already in the midst of a career-best season, the three-time Pro Bowler completed 5-of-7 passes for 53 yards on what was an eventual game-winning 75-yard scoring drive late in the fourth quarter.

This was a season-defining drive for the Raiders. A win here, and they’d remain very much alive in the AFC West race. A loss, and the remainder of their tenure in Oakland likely would have included another lost season. What a clutch performance from Carr and Co.

Oakland knew very well that this rookie second-round pick would have a learning curve. Once the team traded Gareon Conley last month, it became apparent that Mullen would be relied on a lot. While the talent is there, he still leaves a lot to be desired.

That came out in droves Thursday night. Mullen was called for pass interference in the first quarter on a play that resulted in an interception. Later in the game, the Clemson product was burned big time by Mike Williams on a 45-yard catch.

This play resulted in a field goal to pull Los Angeles to within 20-17. That’s the issue with relying on a bunch of young players at corner. Coverage will break down. We saw that multiple times from the talented Mullen Thursday night.

What can we say about this dude that has already been noted? On pace for 1,500 total yards and 12 touchdowns heading into Thursday night, Jacobs was already seen as the NFL Offensive Rookie of the Year front runner. After struggling somewhat early on, he made a major difference in this one.

That included the Alabama product winning the game with an 18-yard touchdown late in the fourth quarter. It was an electric run that sent fans inside Oakland Coliseum into a frenzy. All said, the first-round pick gained 101 total yards on 19 touches.