It’s safe to say Super Bowl LII will go down as one of the most entertaining championship games in NFL history.

It was an offensive shootout extraordinaire that saw Tom Brady and Nick Foles ripping off big throw after big throw all game long. Ultimately, the Philadelphia Eagles would find a way to beat the mighty New England Patriots with a come-from behind victory in the fourth quarter, winning 41-33.

These were the biggest winners and losers from Super Bowl LII.

Supposedly, the Eagles were doomed once Carson Wentz tore his ACL. Lane Johnson commented before the playoffs that he and his teammates were mad because people were treating them “like they were the Browns” after that injury.

Well, Foles flipped the script in a big way. He came through with a very serviceable performance against the Atlanta Falcons in the divisional round. Then he lit up the top defense in the NFL in the NFC Championship Game.

In Super Bowl LII, Foles was phenomenal once again.

All told, Foles finished with 373 yards on 28-of-43 passing with three touchdowns and one interception (which was not his fault). Just as we saw in the NFC Championship Game, the Eagles won because of Foles, not in spite of him.

The Eagles are reportedly open to trading him this offseason, and based on his performance during the playoffs and in Super Bowl LII, they might land quite a haul for the man who nearly retired because of Jeff Fisher.

From the get-go, it was clear the Eagles wanted to go after cornerback Eric Rowe (which we predicted, by the way) and they found success doing so. What’s interesting is that Rowe was playing for Malcolm Butler, who for reasons unknown (coach’s decision, though perhaps he was still ill) didn’t touch the field as a defender.

Rowe was the guy who allowed Torrey Smith to come down with a David Tyree-style helmet catch on the game’s first drive (watch here). He was also the guy who got torched by Alshon Jeffery on Phildelphia’s second drive, which culminated in an outstanding 34-yard touchdown. And that was just in the early going.

Rowe had a very rough game overall, and his early mistakes really opened things up for the Eagles. 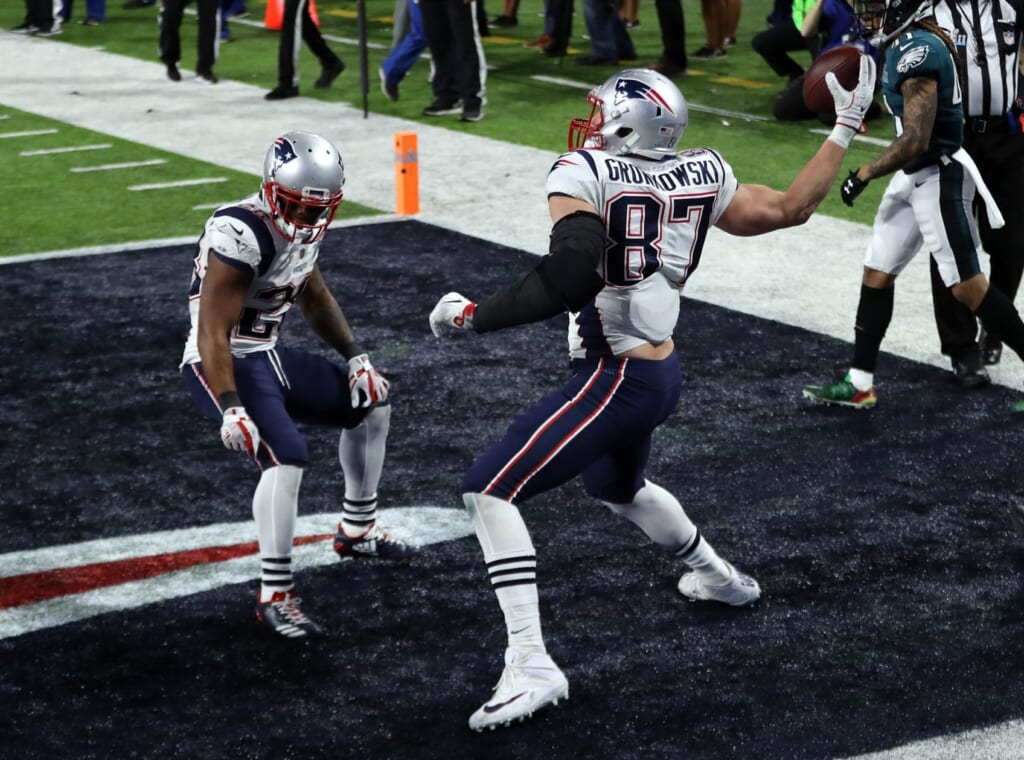 Heading into halftime, Rob Gronkowski had just one catch for nine yards. The Eagles did a great job containing him, and if we’re honest Brady missed him on some open chances. Then, on the first drive of the second half, Gronk and Brady were suddenly on the same page.

Taking advantage of the fact that safety Malcolm Jenkins was mostly covering James White, Brady pressed the attack, going to Gronkowski almost exclusively. They connected four times for 68 yards and a touchdown on that first drive, cutting it to a three-point deficit and putting Philly’s defense on notice that things were going to be different in the second half.

Gronkowski would finish with nine catches for 116 yards and two touchdowns. He’s unstoppable when he gets on a roll, and once he did Sunday the Eagles were in trouble, though the defense got bailed out by the offense.

Even better, he and Brady tied Joe Montana and Jerry Rice for most postseason touchdowns in NFL history with 12. Gronk almost came down with the Hail Mary at the end of the game, too, but came up just short.

If you’re a big fan of defensive battles, then this wasn’t the game for you.

Neither team was able to generate consistent pressure against the pass (no sacks all game until the sack/strip of Brady in the fourth quarter). Neither team was able to do much to stop the run. Both quarterbacks went hog wild. The two teams combined for 1,151 total yards, 54 first downs, 74 points, averaged an obscene amount per play and generally did whatever they wanted to do, most of the game.

We kind of expected the Patriots to struggle, being that they were did most of the year anyway. But Philly featured a defense that was outstanding all year long and was downright dominant in the two playoff games leading up to Super Bowl Sunday.

By midway through the fourth quarter, the offenses had already gained more yardage than any other two teams in a single game during the 2017 season and postseason. By the end of the game, they broke the NFL record for most yards in a single game.

It was a ton of fun for those of us who love points, but it’s one of the weakest Super Bowls in history in terms of defensive impact.

One of the reasons I picked the Eagles to beat the Patriots in Super Bowl LII is that second-year head coach Doug Pederson has proved all year that he can gameplan and call plays with the best of them. He’s relentless when it comes to attacking opposing defenses, and his steady leadership is a big reason why Philly got this far to begin with — especially after Carson Wentz was injured.

On Super Bowl Sunday, Pederson’s mastery of his offense was on full display, as was his penchant to throw caution to the wind and go for broke. His playcall on fourth-and-goal at the end of the second quarter was perfection itself. He showed guts again later in the second half, going for it on fourth down again, and his players came through for a second time.

It’s pretty incredible to say it, but Pederson and his staff out-coached the great Bill Belichick and his high-powered assistants. Now the Eagles are Super Bowl champions, and the future is bright indeed for this team, which is loaded across the board.

Loser: We still don’t know what a catch is 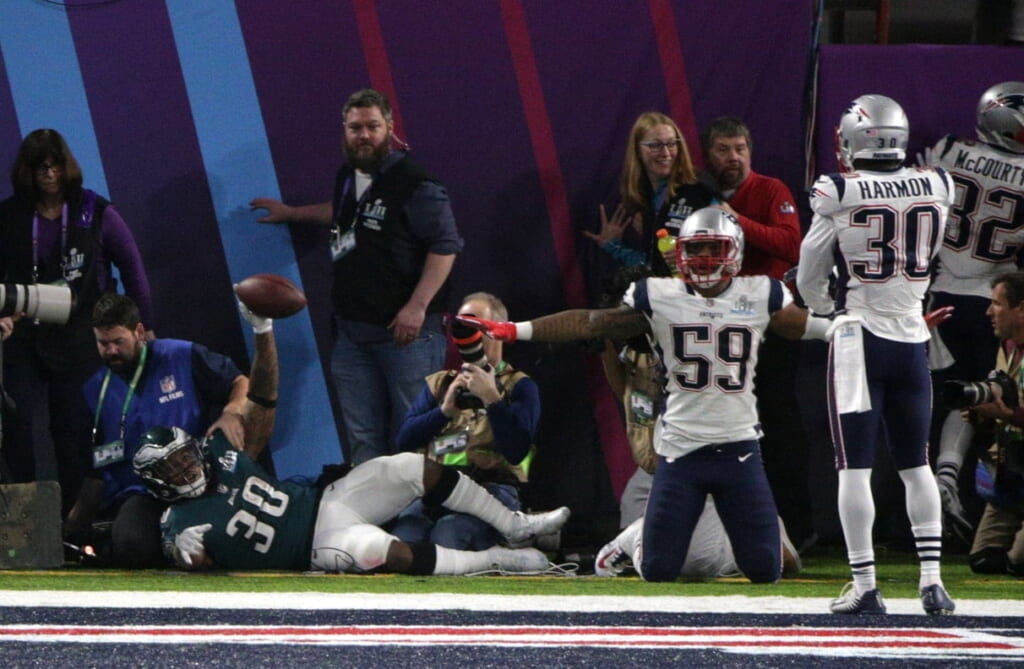 Seriously, this is getting really old.

Corey Clement hauled in a touchdown pass in the third quarter on a gorgeous throw by Foles. Only, he was bobbling the ball as he fell out of bounds (watch here).

Now, let me be clear about my personal stance on this: It’s the kind of play that should be ruled a catch. So I’m not going to be upset that the play was upheld by the league office upon review. With that said, this was a play that was ruled as an incompletion all year long. Every single time. The NFL has consistently said that it is not a catch, yet during the Super Bowl suddenly it reversed course.

Then, late in the fourth quarter, Zach Eartz came down with a touchdown that was eerily similar to the one Jesse James caught against New England late in the season. And again, just like they did earlier, the refs reviewed it, and upheld it, saying he had established himself as a runner. We’re betting James and the Steelers are fuming about this, because this was another instance where we’ve seen way too many other plays like it be ruled incomplete.

Perhaps Roger Goodell’s comments on the catch rule this past week have something to do with all this. We’re not really sure. But we do know that we still have no stinking idea what the NFL deems a catch, and what it believes is a dropped pass.

Winner: LeGarrette Blount has a huge game against his former team

As we predicted, Blount had a huge impact on this game in a positive way for the Eagles against a squishy New England defensive front.

It started early, when Blount ripped off a 34-yard run to set up Philly’s first touchdown of the game. He also busted out a 22-yard touchdown a bit later on. Then in the second half on he was very effective wearing down the Patriots.

Blount would end up rushing for 90 yards on 14 carries, and he scored the touchdown. Not bad for a guy who was given the ultimatum of taking a very low-ball deal to stay in New England or testing free agency after leading the NFL in rushing touchdowns, just a year ago. Thankfully for the Eagles, he chose free agency.

Loser: Jalen Mills has a lot to answer for on Patriots first TD

Philly’s defense really had Tom Brady and Co. on the ropes for much of the first half. Then, in the span of just a few plays, Jalen Mills made some mistakes that led to New England’s first touchdown of the game.

First off, he got called for holding Chris Hogan on third-and-6 from New England’s 14-yard line. Did he hold? Yes, but he probably didn’t have to. Brady’s pass to Hogan was off target, and the drive should have stalled then and there. But an automatic first down gave the Pats new life, and they seized upon the opportunity, victimizing Mills twice more on the same drive.

A few plays after the hold, Hogan got behind Mills deep down the right sideline and hauled in a 43-yard dime from Brady. One play later, James White scored a touchdown on the ground, going 26 yards and running through a Mills would-be tackle to do it.

It was an awful sequence by the cornerback, and it gave the Patriots life.

Winner: Pink was fabulous, despite fighting the flu, and Timberlake’s halftime show was tremendous 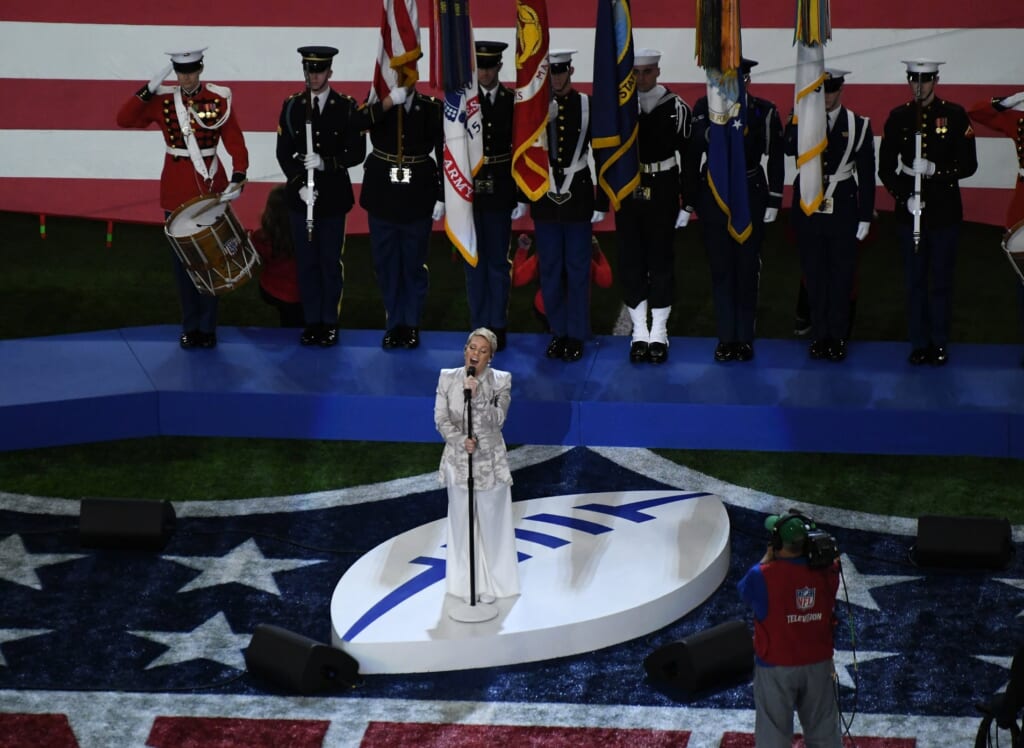 Singing the national anthem at a Super Bowl is something many recording artists consider a high honor. Based on a couple of factors it was clear Pink valued her chance on Sunday.

First off, she got the flu leading up to the weekend but made it clear she wouldn’t let her sickness get in the way. Then, when it was time to sing the anthem, she battled through it with a phenomenal rendition that was full of heart, passion and pure excellence.

Twitter was abuzz with fans who were in awe of her performance. We loved every second of it (113 seconds, to be exact — a boon for those who bet the under on two minutes) and commend her for a job well done.

Then at halftime, Justin Timberlake put on a heck of a show. Visually, it was captivating. The choreography was impeccable. He even busted out a Prince tribute, as was rumored to happen, along with some amazing graphics to honor the legendary, late pop star. It was very fitting being that this year’s Super Bowl was being contested in Prince’s hometown.

It was entertaining, and clean, which is more than we can say about the last time Timberlake played the Super Bowl.

Neither team had a lot to be proud about as it relates to special teams play in Super Bowl LII.

The Eagles missed an extra point after their first touchdown, which was compounded later when they failed on a two-point conversion.

The Patriots missed an extra point as well, and they also completely botched a field-goal attempt on their second drive of the game. First the snap by Joe Cardona was bad (low and into the feet of punter Ryan Allen). Then Allen couldn’t get the laces out, and the result was a disastrous miss (watch here).

That’s a total of seven points left on the field by the two teams combined in the first half.

Winner: Even in defeat, Tom Brady was magnificent

The Patriots lost, but you cannot blame Tom Brady. The man did everything he could to will his team to a sixth title. The Eagles were just better this day.

Brady finished the game with an astonishing 505 yards (most in any Super Bowl in NFL history) on 28-of-48 passing with three touchdowns and no interceptions. He did turn the ball over late, and that proved to be the dagger when the Eagles recovered a fumble on a sack/strip by Brandon Graham.

Still, we cannot say Brady is a loser after he put together such a masterful performance. He’s the GOAT, and we expect he’ll make another Super Bowl or two before he finally calls it quits.