Tremendous performances and the funniest flop 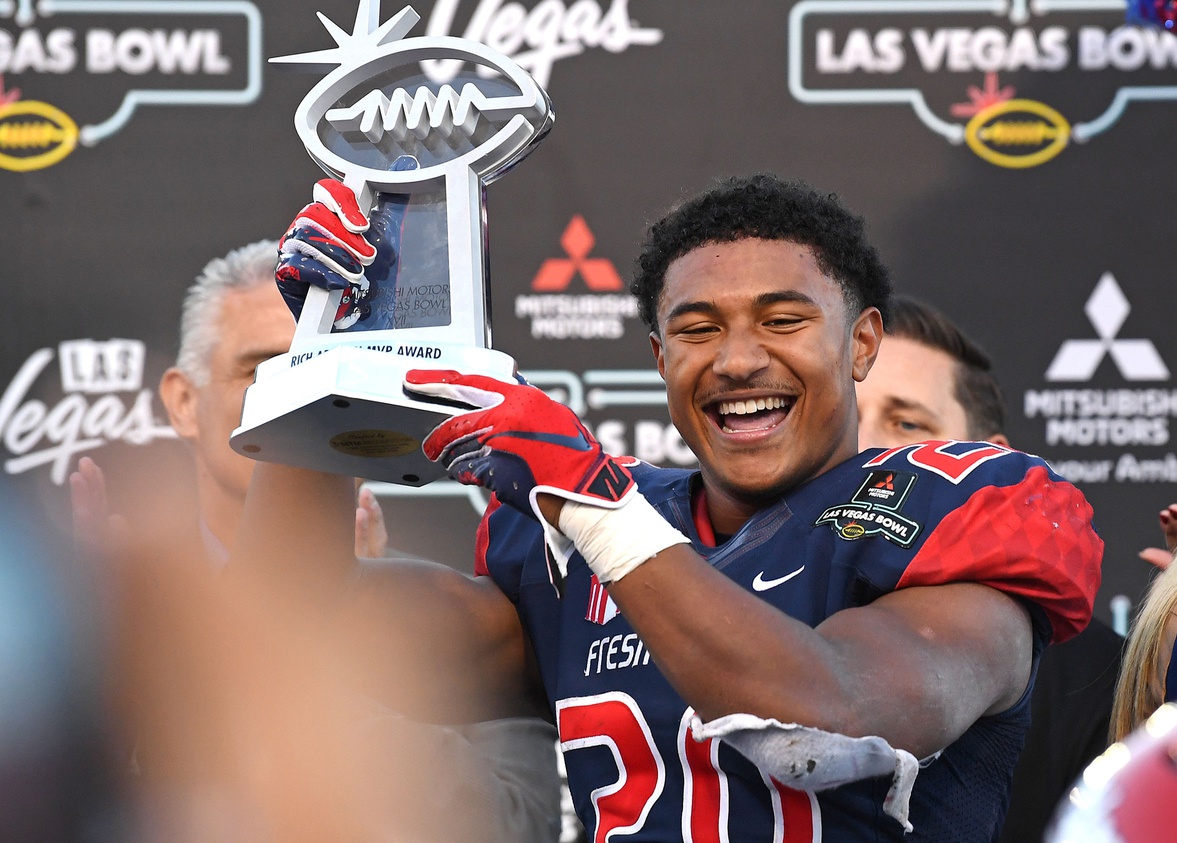 The first bowl games of the 2018 college football season took place on Saturday.

Fans were treated to some tremendous performances, and some duds, along with one of the funniest flops we’ve seen all year.

Here are the biggest winners and losers from Saturday’s bowl games.

The Aggies took a two-score lead into halftime, but by the end of the third quarter they had just a one-point lead over the Braves. That’s when Malik Wilson put the game away for good.

The diminutive receiver was deep for the kickoff return following Alcorn State’s field goal, which pulled the Braves to within a point, 17-16. Then this happened.

The touchdown, and following extra point, gave North Carolina A&T an eight point lead. The Braves ended up scoring a touchdown in the fourth quarter but failed to convert a two-point conversion to tie. Needless to say, this return was the biggest play of the game. 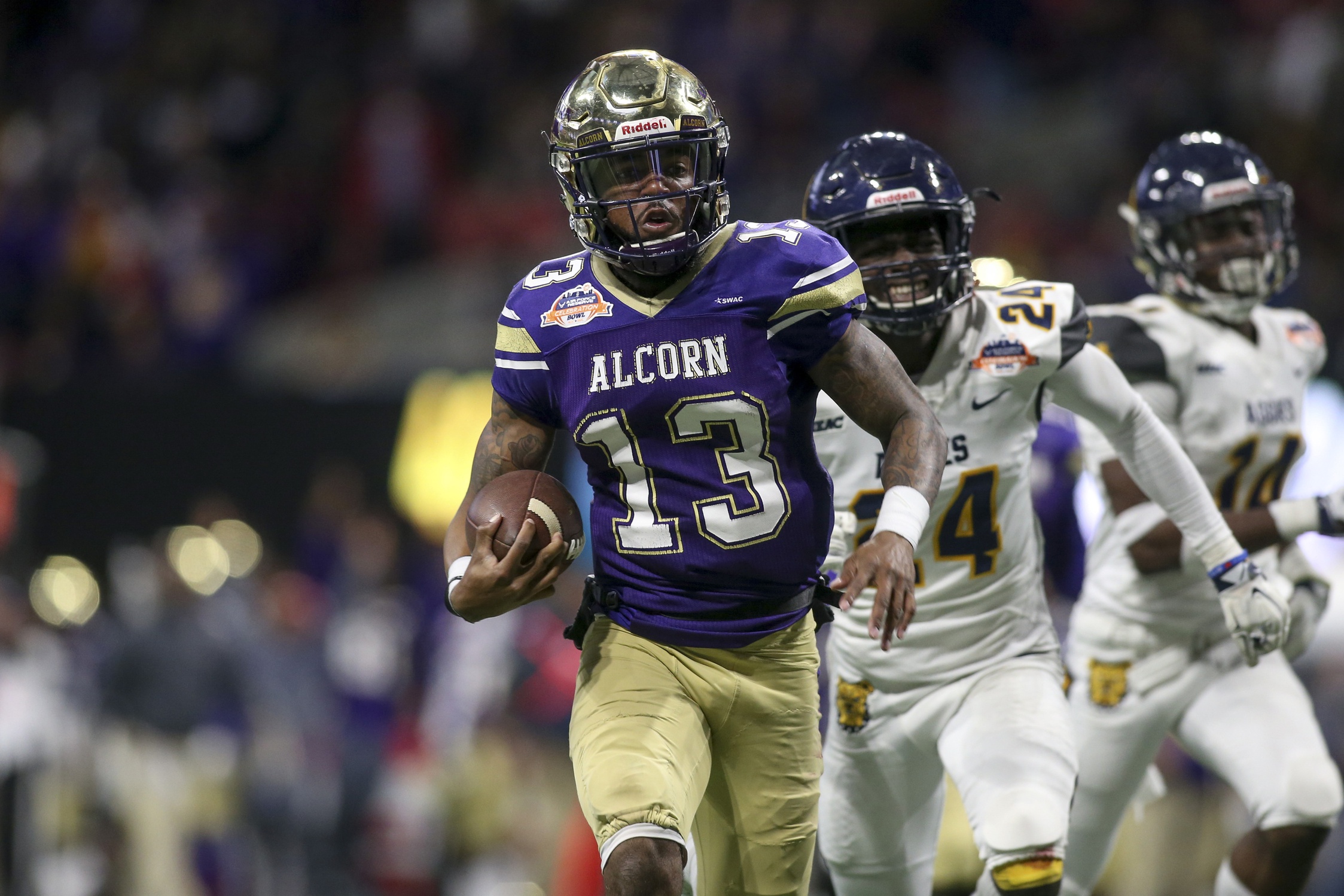 Dual-threat Alcorn State quarterback Noah Johnson had plenty of success running the ball on Saturday. He racked up 120 yards and two touchdowns on the ground, and the Braves tallied 328 total rushing yards in the game.

Unfortunately, when his team needed him to make plays with his arm, Johnson came up short. He completed just 11-of-27 passes for 128 yards, and his first-half interception was very costly, as it allowed the Aggies to score a field goal.

In a game that was won by two points, that looms large.

The Tulane Green Wave rolled over Louisiana’s defense from the start of the game until its conclusion, leading to a 41-24 victory.

All told, the Green Wave racked up 28 first downs and 482 yards, dominating the time-of-possession battle by a 2-to-1 factor. The workhorse was junior power back Darius Bradwell, who turned 35 carries into 150 yards and two touchdowns.

How do you respond to giving up an opening drive TD?

If you're @GreenWaveFB, you score an opening drive TD of your own. pic.twitter.com/HVISTE4XY8

His ability to continue pounding the rock allowed Tulane to keep the Ragin’ Cajuns off the field and led to a huge victory — the first bowl win for Tulane since 2002.

Loser: Louisiana’s offense wasn’t up to the task

The Louisiana offense was anything but Ragin’ on Saturday. There were some big plays sprinkled throughout, including a brilliant 38-yard touchdown run on the game’s first possession.

Raymond Calais makes a house call to give @RaginCajunsFB the lead in The @CureBowl. pic.twitter.com/TrDvMaYiWD

Unfortunately, that proved to be the last score of the first half for Louisiana, which went punt, punt, punt, punt, end of half, gaining just 26 yards on the final five possessions in the half.

All told, the Ragin’ Cajuns were able to generate just 12 first downs, converted just 4-of-13 third downs and gained 258 yards of total offense.

Winner: Jordan Love and the Aggies were on fire 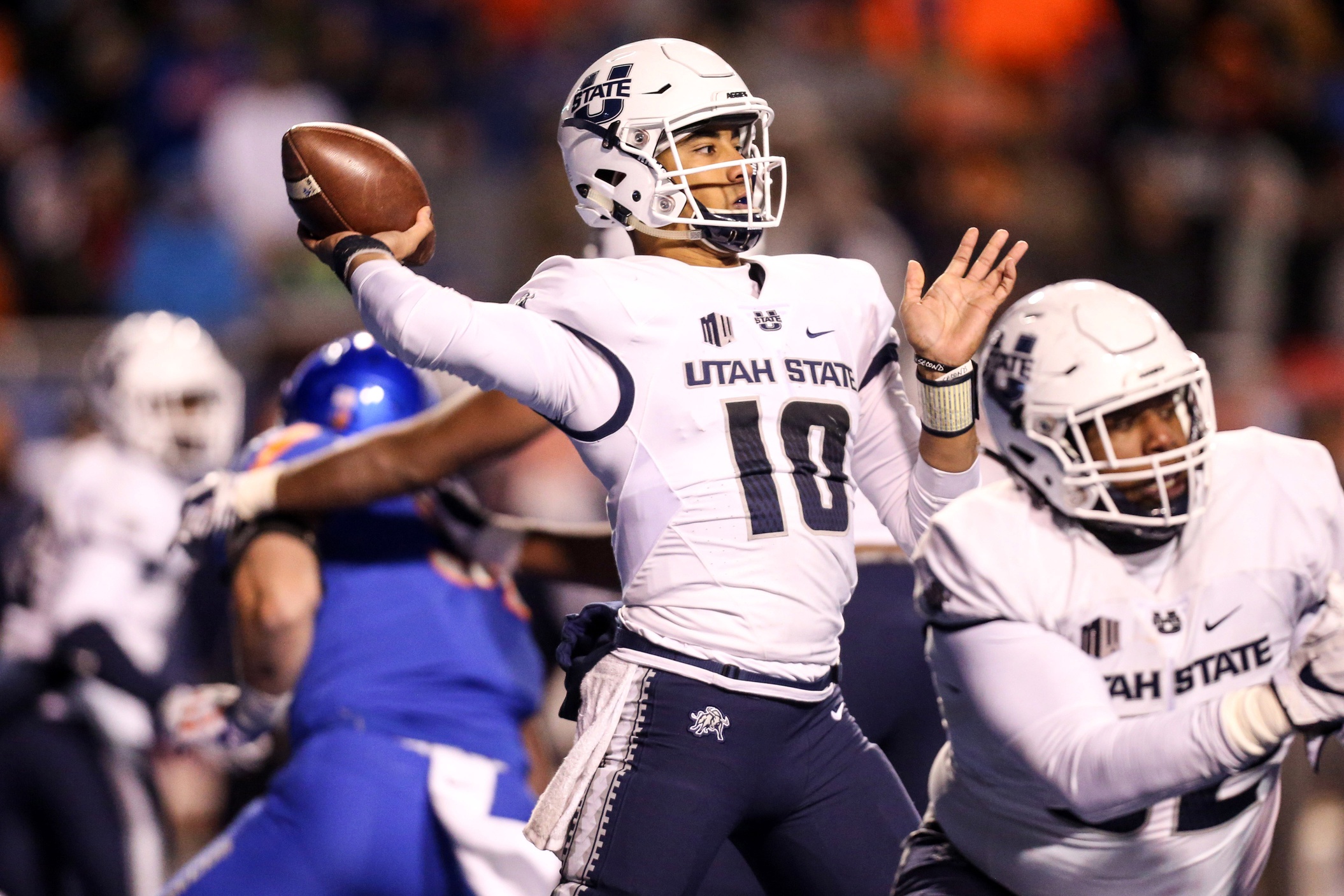 Before the New Mexico Bowl began, it seemed like the Aggies might really struggle due to a massive coaching deficiency. Any thought that Utah State would be out-coached in this one went away almost immediately, however, as the offense scored so fast — setting a New Mexico Bowl record — that barely anyone saw the 72-yard touchdown.

Receiver Aaren Vaughns caught two of the four touchdown passes thrown by the red-hot Jordan Love (including this ankle-breaking gem). Love was ridiculous, completing 21 passes for 359 yards and the four scores, and the run game cleaned up big time in the second half.

Just a huge, eye-opening performance by the Aggies, who capped off a big season with their 11th win. 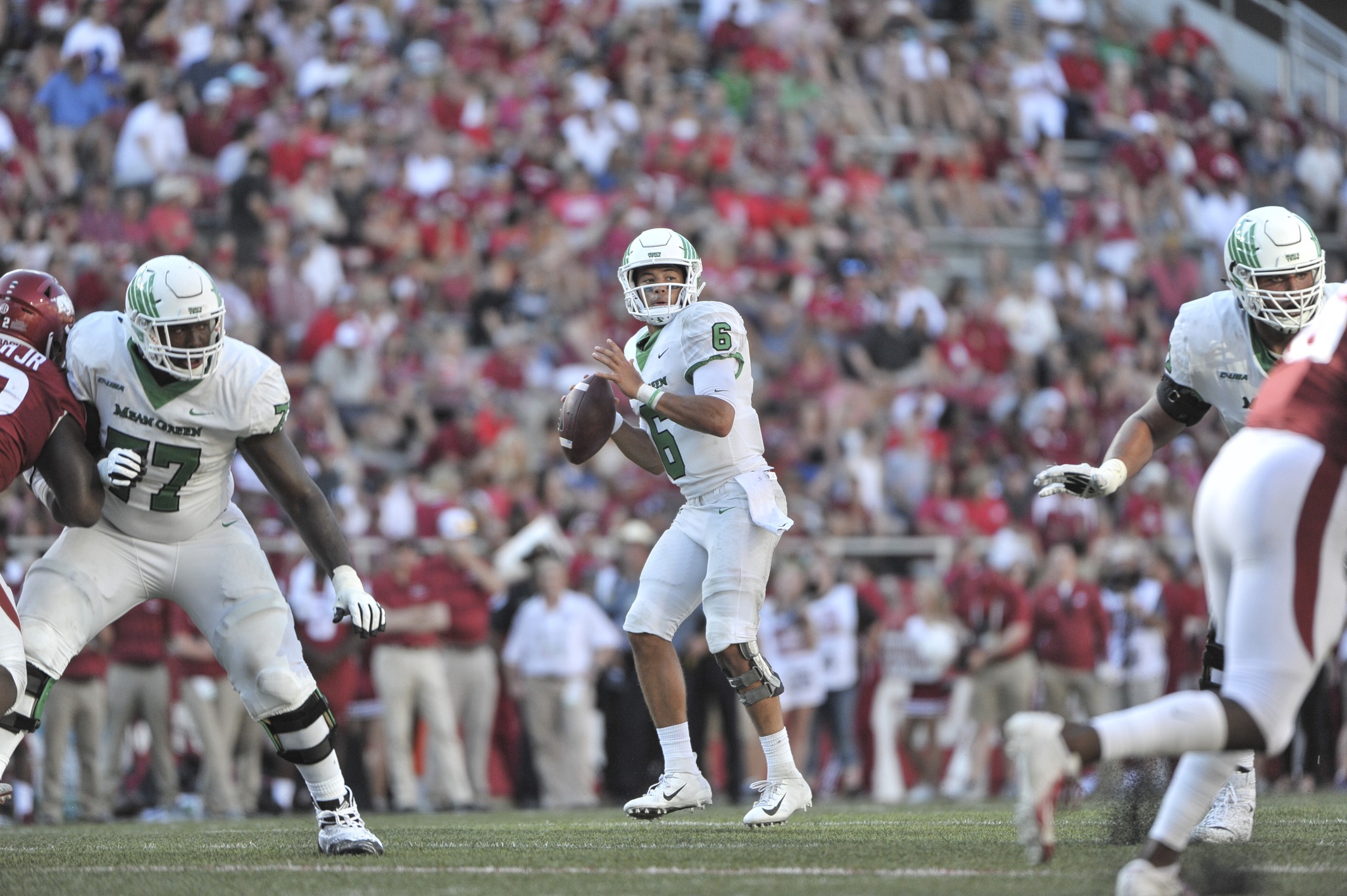 When starting quarterback Mason Fine went down with a hamstring injury early, North Texas’ offense retreated like a turtle into its shell. He tried to gut it out but ultimately had to be replaced.

Backup Quinn Shanbour was atrocious passing the ball. He completed just 2-of-8 attempts for 24 yards with no touchdowns and three ghastly interceptions. Kason Martin ultimately did a bit better but it was too little, way too late.

In the end the Mean Green offense managed 313 total yards but turned the ball over four times and generated just 13 points. 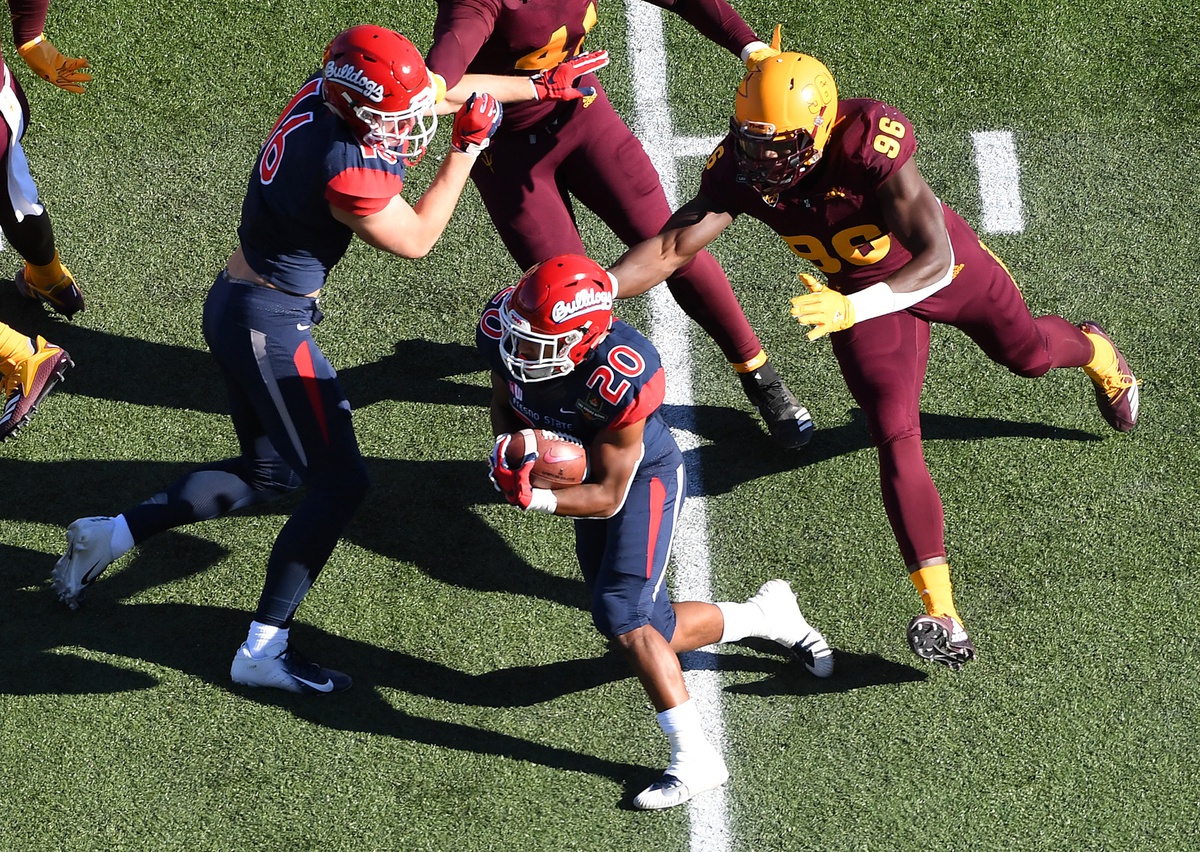 Fresno State outlasted Arizona State in the Las Vegas Bowl, and Bulldogs running back Ronnie Rivers was a big reason why.

On a day that saw quarterback Marcus McMaryion get uncharacteristically careless with the football, it was up to Rivers to carry the offense. And boy, did he. The sophomore running back toted the rock 24 times, piling up 212 yards and two touchdowns, including this gorgeous 68-yard dart right up the gut.

The diminutive back also caught four passes for 33 yards and was the best offensive player on the field for either team. Showing up huge for his team, this performance was — by far — the best of the season for Rivers. 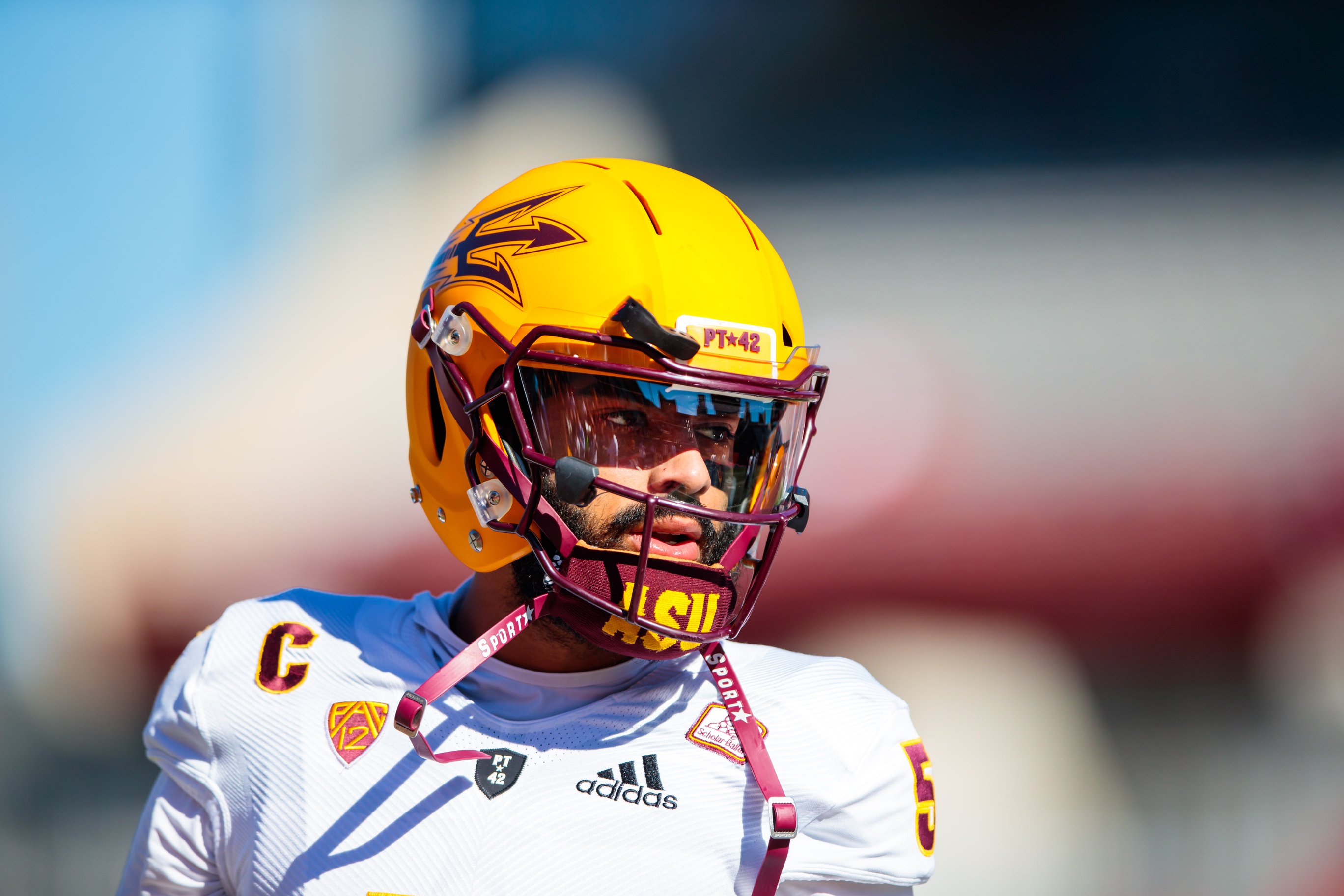 The Arizona State defense did everything in its power to slow down the Bulldogs, forcing three turnovers. Unfortunately for the Sun Devils, quarterback Manny Wilkins threw two interceptions of his own and was on the wrong end of one of the worst hurdle attempts we’ve ever seen.

The first pick ended up going for six points the other way when defensive back Anthoula Kelly jumped the route and romped 70 yards to the house (watch here).

The second was just as costly to the team, and perhaps it was even more costly to Wilkins on a personal level. This second turnover occurred late in the fourth quarter, with ASU driving and down by 11. It also resulted in Wilkins suffering what appeared to be a bad leg injury. Just a brutal game for the young man.

It would be easy to focus on the incredible efforts of the offensive linemen and running backs employed in the winning team’s offense. They all deserve praise.

However, we’ll give a tip of the cap to kicker Tyler Bass as the biggest winner of this one. He was so clutch, hitting all three of his field-goal attempts (including the game-winner from 40 yards out as time expired), and both extra points.

All told, he accounted for just under half of hist team’s 23 points.

Loser: Eastern Michigan had no answer for the triple option 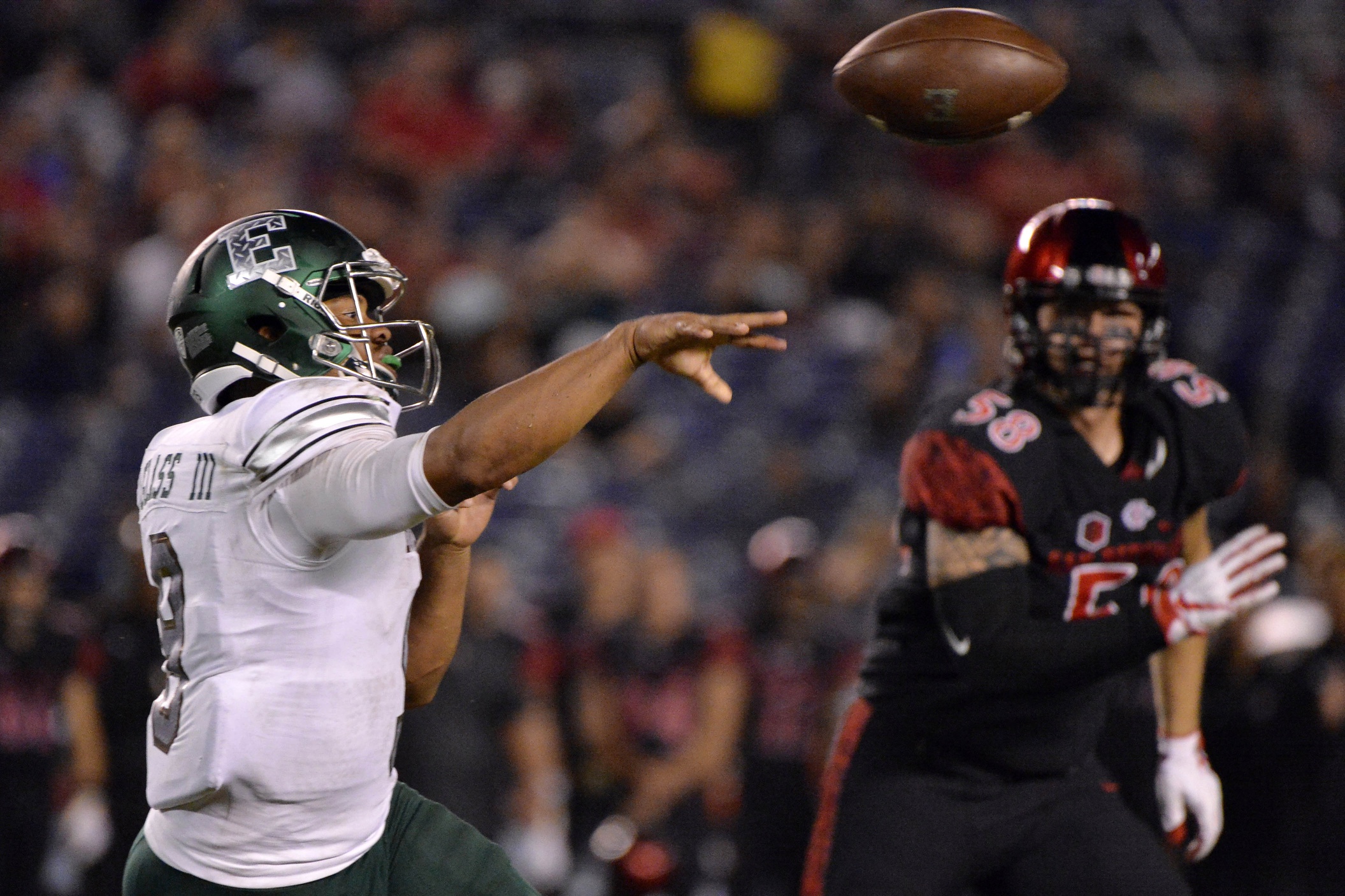 Despite a really strong performance by quarterback Mike Glass III, his Eagles lost. A big reason for the loss was that Eastern Michigan’s defense just could not stop the triple option rushing attack employed by Georgia Southern.

This became painfully obvious at the end of the fourth quarter. Glass had just led his offense on a go-ahead touchdown-scoring drive to give his team a one-point lead. With just 3:33 left on the clock, Georgia Southern could not be stopped en route to marching down the field for the game-winning field goal.

All told, Eastern Michigan gave up 333 yards and two touchdowns on the ground. 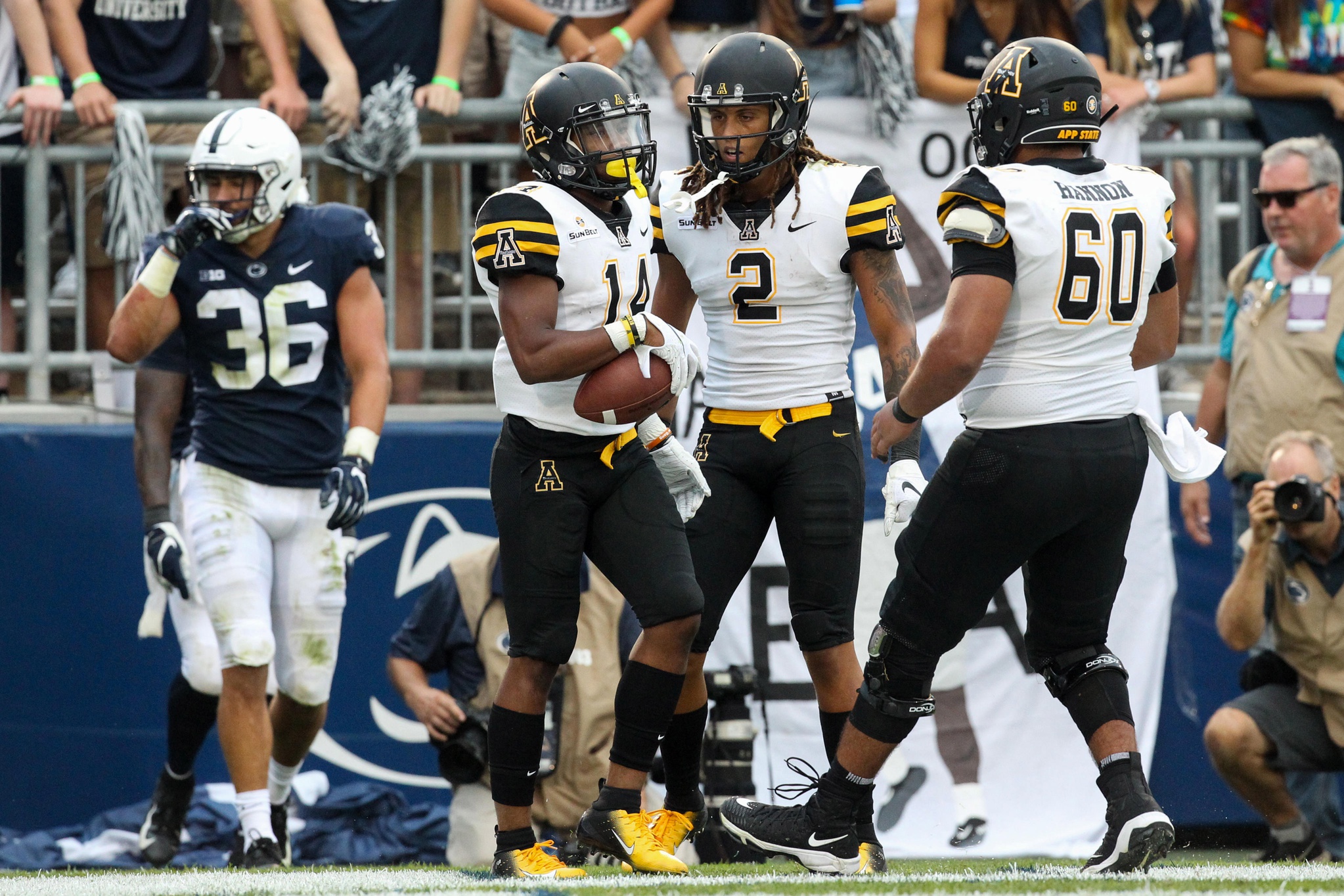 The first quarter of Saturday’s final bowl game, the New Orleans Bowl between Middle Tennessee and Appalachian State, was ugly. Both teams struggled to get anything going on offense. The Mountaineers opened the game with an interception and fumble on their first two offensive possessions.

The once-tight game was suddenly a blowout. From there, the Mountaineers went on to rout the Blue Raiders, 45-13.

Loser: Brent Stockstill had the worst game of his season 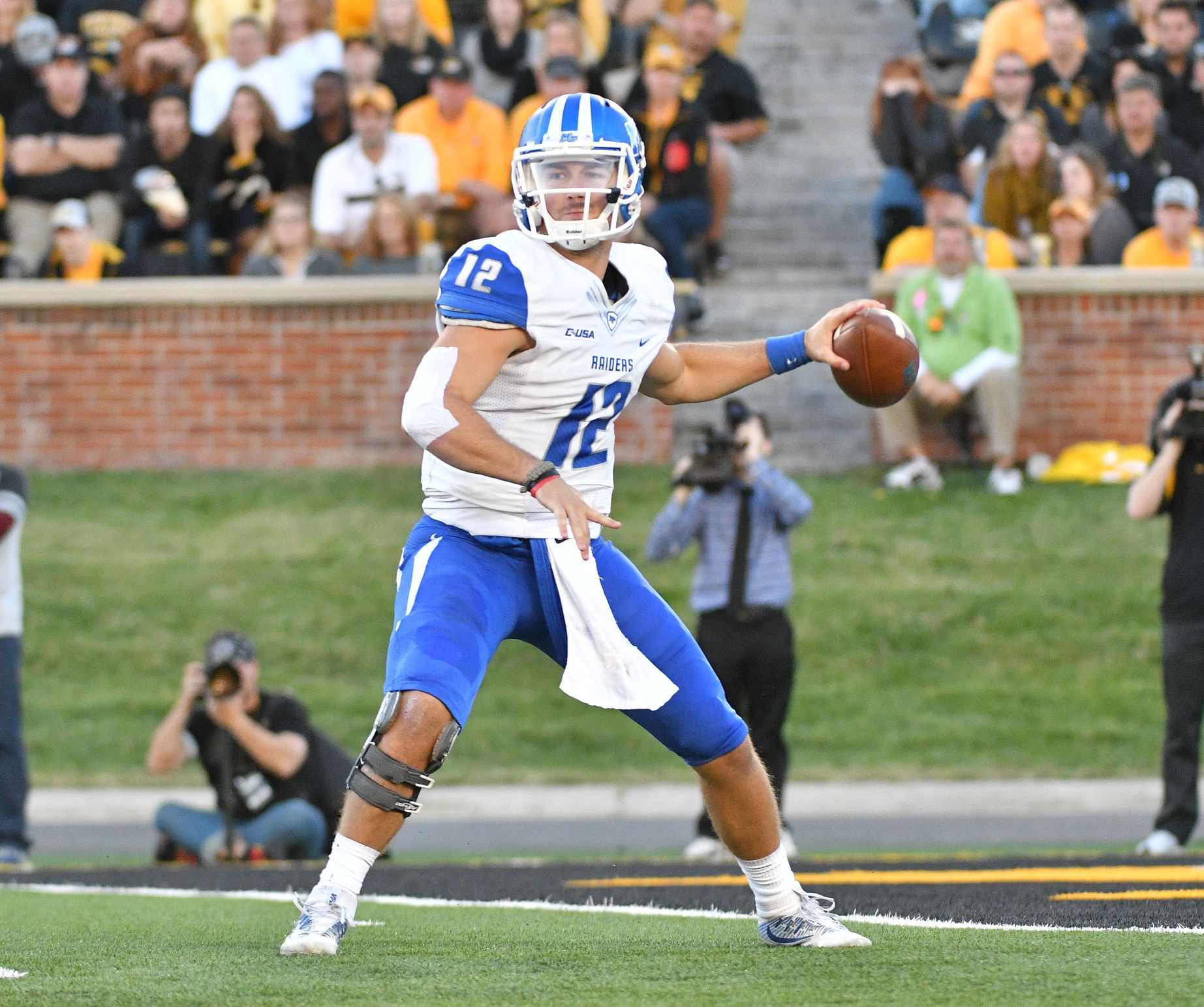 As our David Kenyon pointed out in his preview of Saturday’s games, Middle Tennessee was only going to have a shot Saturday night against Appalachian State if Brent Stockstill had a sharp game.

It didn’t help Stockstill’s cause that he was under constant pressure (six sacks), and that the Blue Raiders couldn’t really establish the run. Appalachian State’s defense is fierce, and it came to play in this game.

But in the end Stockstill made some big mistakes, too. He finished with 330 yards on 25-of-37 passing but threw just one touchdown and had two bad interceptions.

It was his worst performance of the 2018 season, and it couldn’t have come at a worse time.