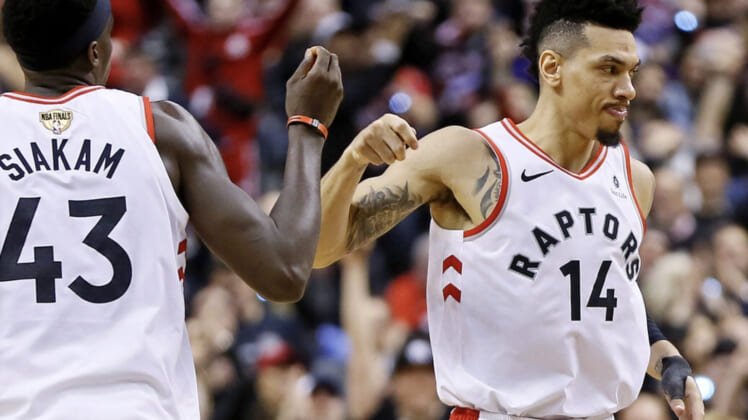 The long anticipated 2019 NBA Finals between the Toronto Raptors and Golden State Warriors tipped off Thursday night in Canada.

Coming into the series, Toronto found itself as overwhelming underdogs. Though, Kawhi Leonard and Co. were favored to win the opener at home.

From pretty much the start Toronto played like the better and more hungry team. Pascal Siakam dominated all four quarters. Kawhi Leonard came through when it counted the most.

Meanwhile, the Warriors couldn’t get any secondary scoring behind Stephen Curry. Klay Thompson struggled and was visibly frustrated. Draymond Green found himself in foul trouble.

Here are the biggest winners and losers from Toronto’s 118-109 Game 1 win over the defending champs in the 2019 NBA Finals.

A lot was made of Gasol’s struggles on offense in the Eastern Conference Finals. He also didn’t seem to have a great matchup against Golden State’s bigs in the NBA Finals. If Game 1 is any indication, that was nothing more than narrative.

Gasol led Toronto in scoring with 14 points in the first half, finishing that span plus-11 in the process. Showing improved defense, his all-around game was excellent. In the end, the borderline future Hall of Famer scored 20 points and grabbed seven boards before fouling out.

With Kevin Durant out of action, it was rather apparent that Thompson needed to step up behind Stephen Curry. That certainly wasn’t the case in Game 1.

Klay just didn’t have it on either end of the court. His frustration boiled over with a dumb technical in the final stanza. Thompson was ultimately minus-10 on the court and didn’t show the same long-range sniper ability that has defined his career. Maybe he should start listening to Drake music again.

This NBA champ entered Game 1 having hit on just one of his past three 15 three-pointers. But proving himself to be the solid veteran we saw in San Antonio, Green did not hesitate to take big shots at big times.

Still getting the starting nod for Nick Nurse, Green drained 3-of-7 three-point attempts and played some absolutely great perimeter defense against the likes of Curry and Thompson. Green could very well be an X-factor moving forward in the series.

The aggressiveness we saw from Green during Golden State’s four-game sweep of Portland in the Eastern Conference Finals just wasn’t there Thursday night. He attempted three shots in the first half, committing as many fouls and turnovers in the process.

Green might have finished the evening with a triple-double (10 points, 10 rebounds and 10 assists), but he was not the same overall presence we’ve seen through the playoffs. That’s magnified by the performance Pascal Siakam put up on him offensively.

Not enough can be said about this youngster. He might not be the best player in Toronto, but Siakam continues to perform like a king. Thursday night’s action was no different.

At one point spanning the final three quarters, Siakam hit on 11 consecutive shots. He did so with elite defenders such as Draymond Green and Kevon Looney on him. With Kawhi Leonard laboring a bit, Siakam’s 32 points was the difference in this game.

While DeMarcus Cousins was performing well in limited action, the likes of Kevon Looney and Jordan Bell did not do their thing. Bell got the start over his counterparts, playing a combined 12 minutes and scoring two points. Meanwhile, a previously impressive Looney scored nine points but was negative-four in 28 minutes of action.

We’re highly intrigued to see how Steve Kerr employs his bigs in Game 2. The rotations clearly did not work Thursday evening. There’s now a good chance that Cousins will get the start over the others Sunday evening.

Pretty much the only member of the defending champs that did anything on offense Thursday night, Curry was hassled by both Toronto’s defense and some bad officiating. Despite this, the two-time former MVP was still able to do his thing.

Curry scored 34 points on 8-of-18 shooting, including a ridiculous 14-of-14 mark from the free-throw line. He continued to display aggressiveness while not settling for threes. That’s what the Warriors need with Durant sidelined.

As the rest of the team was busy knocking off the defending champs in Game 1, Lowry’s struggles continued. The All-Star point guard was in foul trouble throughout the game and continued to show frustration.

Lowry shot just 2-of-9 from the field and scored seven points. He also turned the ball four times and missed on all but one of his five three-point shots. It might not have mattered in Game 1, but Lowry will have to step up moving forward in order for Toronto to win the series.