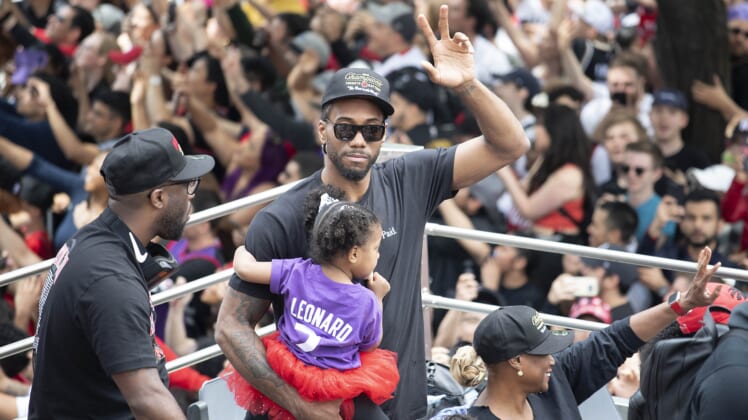 Game 6 of the NBA Finals between the Toronto Raptors and Golden State Warriors was an absolute doozy. With Toronto one win from a first ever NBA title, it was an up and down affair in the final game at Oakland’s famed Oracle Arena.

Thompson himself went down with a knee injury in the second half. That played a major role in Toronto being able to hold off Golden State 114-110 to claim a first ever NBA title. But it was key play after key play from the likes of Fred VanVleet and the above-mentioned Lowry that made a huge difference.

For Golden State, Stephen Curry missed a potential game-winning three on a clean look at the end of the fourth quarter. That will define his performance Thursday night.

Here’s the biggest winners and losers from the Raptors’ Game 6 victory in Oakland.

After missing his previous 11 three-pointers heading into Game 6, Siakam showed confidence for such a young man in such an important game. He hit 3-of-5 from distance in the first half alone.

Siakam saw the offense run through him in the second half an awful lot. He did a tremendous job passing out of double teams and making the plays he needed to. All said, Siakam scored 26 points while grabbing 10 rebounds and dishing out three assists.

After seeing Quinn Cook hit multiple big shots during Golden State’s electrifying Game 5 win, he and Shaun Livingston looked lost in this one. They combined for for two points in 12 minutes of action in the first half and were minus-12 when on the court.

Once Thompson went down to a knee injury, Golden State needed Cook and Livingston to step up. If for nothing else, to help Stephen Curry out. It did not happen. The two ended Game 6 with eight points on 4-of-8 shooting, both missing key shots in the final stanza.

Averaging a near triple-double heading into Game 6, Green’s offensive ability was was on full display at Oracle. He had a resounding nine rebounds and eight assists in the first half alone.

Green might have struggled to an extent with turnovers (eight), but he was tasked with pushing the pace throughout the game. The All-Star ultimately finished Thursday night with 11 points, 19 rebounds and 13 assists. He left everything out on the court.

This veteran’s up-and-down playoff experience continued Thursday night. After dropping an average of 14.3 points and 7.3 rebounds over the past three games, Gasol was a lost soul out there.

He didn’t make a single field goal on five attempts and committed four fouls. Toronto was actually minus-seven in the 27 minutes the borderline future Hall of Famer played.

For as much crap as Lowry gets, he was a true gamer in the NBA Finals. People criticized him for missing a potential Finals-clinching shot in Game 5 before realizing it was blocked by Draymond Green. People criticize Lowry for coming up small on the grandest of stages.

That most definitely wasn’t the case in Oakland Thursday evening. Lowry scored Toronto’s first 11 points and dropped 21 points in the first half alone. Lowry continued to play under control in the second half despite being in foul trouble. The end result was potentially the best performance of his playoff career with 26 points, seven rebounds and 10 assists.

We hate to put Curry in this category. But his potential game-winning three pointer at the end of the game deserves its own blurb. Curry got his best look of the evening and it fell off the rim. That’s what he’ll be remembered for in Game 6.

The three-time NBA champion ended Thursday evening having hit on just 6-of-17 shots, including 3-of-11 from distance. Toronto’s box and one defense did the most damage once Thompson went out to injury.

What a true star in every sense of the word. Thompson dropped 30 points in just 32 minutes of action. He hit on 4-of-6 three-pointers, finishing the Finals hitting on 60 percent of his shots from distance. But that’s not anywhere near the story here.

Thompson went down with what looked to be a serious knee injury in the third quarter. He was down in pain for a while before heading to the locker room. Though, the injury came on a foul. If Thompson wasn’t able to shoot the free throws, he would have been sidelined for the remainder of the game. Thompson came back out and drained both before exiting Oracle on crutches. He’s a true giant if we’ve ever seen one.

In a game that came down to the last minute, Golden State’s nine missed free throws on 30 attempts really did make the difference. You simply can’t leave that many points on the table, especially given that injuries made the Warriors margin of error a lot less.

Specifically, DeMarcus Cousins and Andre Iguodala hit on just 5-of-12 free-throw attempts. A few more makes, and this series would be heading back to Toronto for Game 7. It’s that simple.

Golden State needed this former NBA Finals MVP to step into a scoring role with Kevin Durant sidelined and Klay Thompson missing crunch time. That’s exactly what he did. Sure we had Iggy as a “loser” for missing 4-of-5 free-throw attempts. That’s fine.

But what the veteran did on offense throughout the game was astonishing. He hit on 9-of-15 from the field and finished second to Thompson in scoring for the Warriors with 22 points. That’s a big man performance right there.

When all as said and done, Van Vleet tallied 22 points and connected on five three-point attempts while playing tremendous defense on Curry. What a great performance from this underdog.

Pretty much everyone watching this game was heartbreaken once Thompson went down with an apparently serious knee injury in the third quarter. It’s something no one wanted to see. Thompson was dominating. The game was one knockout punch after another.

To see Thompson go down like that in the final game at Oracle was just devastating. This comes a few days after Kevin Durant suffered a ruptured Achilles in Game 5. No excuses. But we would have loved to see these two teams go at it full strength. The series ultimately ended up being that good.