Winners and losers from Raptors-Bucks Game 2 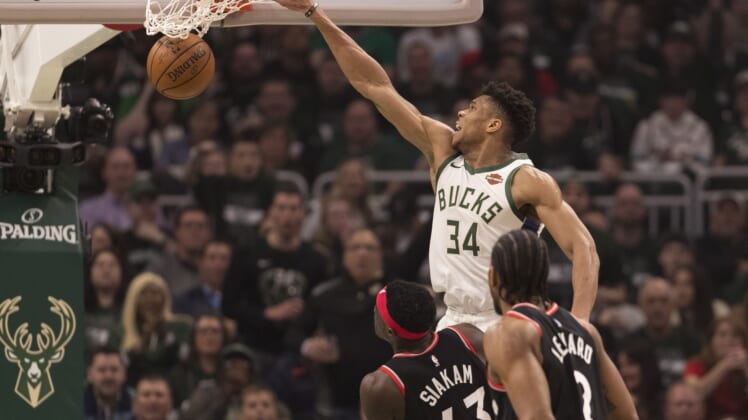 After a thrilling Game 1 battle that saw the Milwaukee Bucks deliver a dramatic comeback against the Toronto Raptors, Game 2 didn’t require any heroics from the Bucks.

Milwaukee started hot from the tip and quickly rolled out to a big lead with strong defense and some incredible performances from its bench. Meanwhile, no one outside of Kawhi Leonard could provide any kind of energy, defense or production on Toronto’s roster.

It was a one-sided game from tip to the final whistle with one team proving itself as the best team in the conference. Here are the biggest winners and losers from Milwaukee’s meteoric-sized domination over the Raptors on Friday night.

The Greek Freak is taking over the playoffs and if his Game 2 performance is any indicator, all he can think about is sweeping the Raptors. Antetokounmpo set the tone immediately with a cutback slam followed by a block, two plays that quickly got the stadium rocking and silenced Toronto.

The 24-year-old looks possessed at times on the court with a willingness to rip the soul out of his opponent on the defensive end then race down the court and slam it through for the bucket. If he starts to hit from deep more consistently, there is nothing the Raptors can do to stop him from knocking them out with more 30-plus point, 15-plus rebound performances.

While Gasol delivered some key performances against the Philadelphia 76ers, this matchup against the Bucks is a completely different animal. Frankly, everything he has showed in the first two games is proof he shouldn’t see the court in meaningful minutes for this series.

Gasol is getting destroyed by Milwaukee’s length and athleticism up and down the court. He is being exploited time and time again by the Bucks, which leads to open three-point shots and he is struggling to make an impact on the boards.

If Gasol offered anything positive as a scorer the other issues wouldn’t hurt quite as much, but the complete package of chaos makes him a walking disaster on the court.

After missing the past two months with a foot injury, Brogdon is quickly shaking off the rust and demonstrating why Milwaukee is even more dangerous than the team we saw at the end of the regular season.

Brogdon outplayed Eric Bledsoe once again and is building his case to be pushed into the starting lineup. The 26-year-old’s three-point shot was in peak form on Friday night and he stepped up even more as a distributor. As Bledsoe’s shot continues to disappear, Brogdon is stepping up in this series and making Milwaukee’s bench even better.

Even after a masterful performance in Game 1, questions about Lowry’s consistency in the postseason hung around. He showed exactly why so few people trust him to maintain that success in the playoffs with a rough night on Friday.

Lowry’s three-point shot was off for most of the night as he finished 2-of-9 from deep and 4-of-13 from the field. The veteran also posted an ugly plus/minus with -19 on the night, as Toronto’s starters were routinely out hustled and just plainly beat on the court.

The Raptors desperately need someone to step up alongside Leonard as the series moves to Toronto. If Lowry fails to step up, then it’s time to put a bow on this series.

Ilyasova turned back the clocks in Game 2 and made Milwaukee’s fans feel like it was 2012. The 32-year-old who once starred as a role player for the Bucks showed his vintage form with a spectacular performance in the first half off the bench.

Ilyasova finished second on the team with 17 points and even contributed defensively with two timely steals. The Raptors simply seemed to forget about him in this matchup and the veteran burned them all night with his hot touch.

Whatever team we saw jump out to a big lead in Game 1 is gone. The Raptors have been clobbered in the past five quarters and plenty of the blame for the two losses must fall on Nurse’s shoulders

Nurse allowed Gasol to stay on the court for much of the first quarter in Game 2, despite the overwhelming visual evidence he was being exploited by Milwaukee. Meanwhile, the Raptors seemed to rely exclusively at times on isolation plays for Leonard that were routinely figured out by the Bucks.

There is clearly a disparity in talent between these two teams and it’s hurting the Raptors. However, Nurse needs to start shaking up his rotations, drawing up more variety on offense and actually putting this team in position to win.