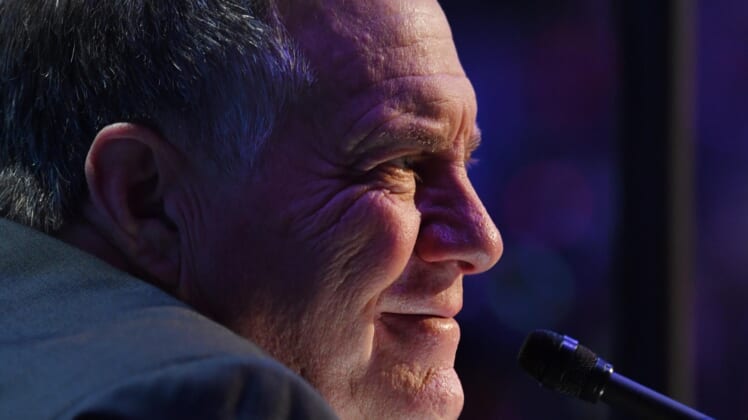 NFL free agency doesn’t start until March 13. In no way does that mean we’re still in the slow cycle of the league’s offseason.

Friday acted as a perfect example of this. A number of trades were made. One was nixed. Free agents were sent packing. And one Pro Bowler found a new home.

It’s in this that we check in on the biggest winners and losers from Friday’s NFL frenzy.

Any time you can add a player of Michael Bennett’s ilk, it’s a good day. Picking up the three-time Pro Bowler for an exchange of later-round picks in 2020 makes things even better. Much like the Patriots have done throughout their near two-decade dynasty, they fleeced an opposing team in a trade. Bennett will now likely replace impending free agent Trey Flowers as New England’s best pass rusher at half the cost.

To make matters even better here, it now looks like Bennett’s brother, Martellus, is looking to come out of retirement and backup Rob Gronkowski at tight end. Oh, did we mention it also looks like Gronkowski himself is returning for another season in New England? How fun.

The purge was in full effect Friday in Jacksonville. The Jags cleared about $30 million in cap room by releasing veterans such as Carlos Hyde, Malik Jackson, Jermey Parnell and Tashaun Gipson. None of the moves were too surprising. It also helps these free agents potentially find new teams before the market opens on March 13.

Even then, it has to be a bitter pill for them to swallow. Each one joined the Jaguars with Super Bowl expectations. Following a disastrous 2018 campaign, they now move on to new cities with nothing guaranteed moving forward. Such is the nature of the beast in the NFL.

Mere days after being a surprise release of the Baltimore Ravens, this six-time Pro Bowler and Southern California native returns home to his roots. Weddle, 34, signed a two-year contract with the Los Angeles Rams on Friday. This comes after he spent nearly a decade with the then-San Diego Chargers.

Equally as important for Weddle as he finishes out a borderline Hall of Fame career, he now joins a potential Super Bowl contender. One of the game’s most-respected players couldn’t have drawn it up any better.

As the early-morning hours hit in Western New York, it looked like these long downtrodden Bills were going to make the first big splash of the NFL offseason. Reports surfaced that Buffalo was on the verge of acquiring seven-time Pro Bowl receiver Antonio Brown. It sent the football world into a frenzy.

Almost immediately after NFL Media’s Ian Rapoport reported the impending trade, Brown took to social media to call it fake news. Other reports suggested that a trade was imminent. Bills fans then woke up Friday morning to the news that their team had pulled out of Brown trade talks. He didn’t want to come to Western New York. Just another day in paradise for Bills Mafia.

It’s not terribly surprising that the Giants put high-priced pass rusher Olivier Vernon on the trade block. Despite performing extremely well for the team over the past two seasons (33 quarterback hits, 13.5 sacks), Vernon wasn’t the difference-maker many had hoped. At the very least, his performance didn’t change the Giants’ struggles too much.

For New York to be able to add a stud guard in Kevin Zeitler from the Cleveland Browns in exchange for Vernon and a swap of mid-round picks, it has to be considered a win. Zeitler has started all 16 games in each of the past four seasons — performing at a near Pro Bowl level in the process. He’ll now join youngster Will Hernandez to form a potentially dominating guard tandem in New Jersey.

We get it. General manager Howie Roseman and Co. didn’t want to pay out Michael Bennett’s salary cap hit for next season. We get it. Philadelphia wants to give former first-round pick Derek Barnett more of an opportunity. That’s all fine and dandy. But sending the three-time Pro Bowler to the defending champs for a swap of late-round picks in 2020 made absolutely no sense.

Even from the perspective of getting anything for the player, this makes no sense. Why even do the Patriots any favors? We’re sure a lesser team could’ve offered up as much. Instead, Philadelphia just helped the rich get richer while selling off one of its best defenders for nothing.