Winners and losers from first half of NBA season 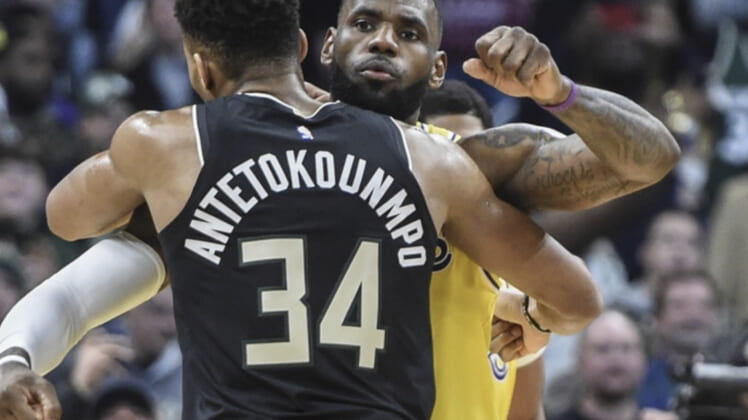 Most NBA teams have finished up the first half of their schedule in what has thus far been a ho-hum 2019-20 season around the Association.

That can’t be said in Los Angeles, where LeBron James and Anthony Davis are dominating opponents. In Milwaukee, the Bucks are on pace to become just the third team to win 70-plus games in a season.

Meanwhile, it’s been an absolutely disastrous season in both New York and San Francisco.

It’s in this that we check in on the biggest winners and losers from the first half of the NBA season.

Winner: LeBron James and the Lakers

Despite some injuries for both James and new teammate Anthony Davis, Los Angeles finished up the first half of the season on pace for 66 wins. This would be the team’s best regular-season output since all the way back in 1999-2000.

Obviously, the focus in Hollywood has been on the James-Davis pairing. That’s fine. But the Lakers are doing some major things defensively and Dwight Howard has had a major rebirth. The team heads into the second half of the season ranked fourth in points allowed and third in defensive rating. We’re talking about the odds-on favorites out west. It’s not that close.

Disastrous. That’s the best way to describe what we’ve seen from Young’s Atlanta Hawks this season. The team finished up the first half of its schedule with a 9-32 record. Young himself has had absolutely no help during his sophomore season.

The talented guard is averaging 29.1 points, 4.5 rebounds and 8.5 assists on 44% shooting from the field this season. He’s playing tremendous basketball. Unfortunately, it has not resulted in team-wide success. The good news here is that Atlanta’s brass is looking to find improvement to run with Young moving forward. Maybe the second half of the season will go a bit better.

This team was absolutely dominant through the first half of the season, posting a 35-6 record. At this pace, Milwaukee will join the Bulls and Warriors as the only NBA teams to win 70 games in a season. Heck, the Bucks are outscoring their opponents by nearly 13 points per outing.

Most of the focus, as it should be, has been on reigning NBA MVP Giannis Antetokounmpo. The dude is averaging 30.8 points, 12.8 rebounds and 5.5 assists. However, the performances we’ve seen from Khris Middleton, among others, has the Bucks as overwhelming NBA title favorites.

The Warriors’ relocation to San Francisco has gone about as bad as anyone could have envisioned. Golden State won 322 games in its final five seasons in Oakland, earning five Western Conference titles and three NBA Championships.

With Stephen Curry and Klay Thompson sidelined, Golden State finished up the first half of its 2019-20 campaign with a 9-32 record. At this pace, it would be the team’s worst season since all the way back in 2000-01. Adding to the humiliation here is that the Warriors are playing in a state-of-the-art venue on the San Francisco waterfront with fans having to pay a bounty to attend games. Just gross.

Turning nothing into something. That’s what this Miami Heat lead executive has done, and it’s absolutely stunning. From signing undrafted free agent Kendrick Nunn to overseeing the improvement of young center Bam Adebayo and drafting Tyler Herro in the first round, Riley should be considered for Executive of the Year honors.

Miami will finish up the first half of its schedule Friday night. It currently sits at 28-12, the second-best mark in the Eastern Conference. Nunn is a top Rookie of the Year candidate. The trade for Jimmy Butler back in July has worked wonders. Pour one out for the old ball coach. He continues to make waves in South Beach.

It’s been a never-ending loop of sadness for Knicks fans in the Big Apple. That has not changed during yet another season of irrelevance for New York. It started with the Knicks’ brass foolishly chasing top-end free agents in the summer, only to sign average veterans to big deals.

On the court, it’s been equally troubling. The Knicks fired respected head coach David Fizdale after a 4-18 start to the season. They now sit with the third-worst record in the NBA at 11-30. As long as James Dolan is running the Titanic on Broadway, there’s no light at the end of the tunnel here. It’s just grotesque what this historical franchise has turned into. And the fans are paying the ultimate price.

When Mr. Logo himself praises a second-year player, you know the dude is absolutely legit. Doncic entered the NBA last season with a bunch of fanfare overseas after earning the EuroLeague MVP. Little did we know that he’d be a legit MVP candidate less than two full seasons into his pro career in North America.

Still only 20, there’s a chance Doncic will join greats Oscar Robertson and Russell Westbrook in averaging a triple-double over the course of an entire season. The Slovenian finished up the first half of the season averaging 28.8 points, 9.8 rebounds and 9.0 assists per game. He also has Dallas on pace to win 50 games after the team missed out on the playoffs in each of the previous three seasons.

It might finally be time for general manager Neil Olshey to blow this entire thing up. Portland currently sits at 18-24 and as the 10th seed out west. The star-studded backcourt of Damian Lillard and C.J. McCollum has not taken that next step together.

Meanwhile, the idea of giving players such as Kent Bazemore and Skal Labissière meaningful playing time in the Westen Conference is just gross. Heck, here’s a team that’s relying on Carmelo Anthony for points. Sure he’s been good, but that just goes to show us how far Portland has fallen after a trip to the Western Conference Finals last season.

Thirty. Seven. Point. Two. That’s what Harden is averaging per game thus far this season. You read that right, 37.2. It’s an historical performance from an MVP favorite that’s also averaging 6.2 rebounds, 7.5 assists and 1.7 steals while shooting 45% from the field.

What makes Harden so special this season is that he’s picked it up big time on the defensive end of the court. Hell, never mind. The dude has dropped 50-plus points five times this season. That’s what makes him special.

Missing substantial action with a shoulder injury has not helped Irving transition to the Brooklyn Nets. Reports that there’s already a split between the enigmatic personality and his new Nets team has added another layer to this. Now, Irving is out here saying that the Nets are a couple pieces from contending after the team added Kevin Durant to the mix. It’s all sorts of ugly.

On the court, Brooklyn boasts a pedestrian 18-22 record. Interestingly enough, Brooklyn was 13-13 with Irving sidelined and boasts a 5-9 record with him on the court. Yeah, this marriage is not starting out in the best of terms.