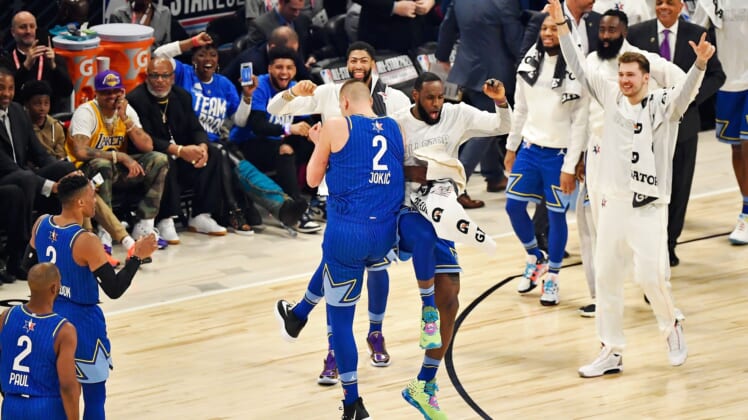 The 2020 NBA All-Star Weekend in Chicago was among the most memorable in recent league history. Saturday night’s events were something else.

The game itself the following night did not disappoint in any way. While the early going lacked defense and intensity, the end of the game was absolutely crazy.

As the teams continued to trade shots, it became apparent that this would end up being the greatest All-Star Game in sports history. Maybe a way to pay homage to one Kobe Bryant.

Team LeBron came out on top over Team Giannis by the score of 157-155. It was something else.

Here are the biggest winners from what was a dramatic exhibition game in Chicago Sunday night.

We knew that the pre-game festivities inside Chicago’s United Center Sunday evening were going to be Kobe-centric. The backstory to this year’s All-Star Game was the tragic passing of Kobe, his daughter and seven others three weeks ago to the day in a helicopter accident in Southern California.

Not a dry eye was left in the building after Magic Johnson paid tribute to both Kobe and former NBA Commissioner David Stern, the latter of whom he credits with helping him overcome his HIV diagnosis more than a quarter-century ago.

From there, Jennifer Hudson performed an absolutely beautiful solo with Kobe and his late daughter, Gianna, featured in the backdrop. The “American Idol” finalist and Academy Award winner put her heart and soul into the performance. Having dealt with personal tragedy in her life, this hit home for the Chicago native. If that wasn’t enough, Common went up on stage and provided an amazing oral history of Chicago basketball. Just some great stuff right here.

We hate to call out this Chicago native for her National Anthem performance Sunday evening. Unfortunately, it was disastrous from the get-go. More often than not, it seemed like Khan was screaming at the top of her lungs rather than actually singing.

It was a cringe-worthy performance, as evidenced by the reaction on social media. Heck, NBA players listening to the rendition were also thrown for a loop. This really did remind us of Fergie’s anthem performance back in 2018. In fact, many concluded that the former “Black Eyed Peas” vocalist was better. Ouch!

The reigning NBA Finals MVP meant business early and often Sunday night. It’s not a surprise that Leonard put on his game face while the rest of the players were pretending like this was a pick-up game early on. Kawhi hit seven three-pointers in the first half alone.

When all was said and done, Leonard scored 30 points on 11-of-18 shooting in a dominant offensive performance. It was enough to keep Team LeBron afloat until a crazy fourth quarter of action.

This super sophomore made sweet music with Ben Simmons early in the game. It’s the type of play we’ve become accustomed to from the NBA MVP candidate.

Unfortunately, the rest of his first All-Star Game did not go too swimmingly for Doncic. The youngster scored eight points on 3-of-6 shooting. In a wide-open game of this ilk, we’d expect this wizard to fill up the box score. That will come in due time. It just did not happen on Sunday.

The Greek Freak translates pretty darn well to an open-court environment. Based solely on his athleticism, Giannis was going to put up numbers in the 2020 NBA All-Star Game. However, we did not anticipate his squad keeping it close against Team LeBron after a lackluster performance in the first quarter. That’s especially true after he was dragged during the All-Star Draft.

Individually, Antetokounmpo scored 25 points on 12-of-21 shooting while grabbing 11 rebounds and dishing out four assists. Even in an exhibition game, he’s proving himself to be a cut above the rest.

Taking part in his eighth consecutive All-Star Game, we’re surprised that Harden has never come away with the MVP. This format seems to benefit a player of his ilk. Sadly, that did not come to fruition Sunday evening.

Harden scored 11 points on 3-of-9 shooting and was on the receiving end of a disrespectful nutmeg from Atlanta Hawks star guard Trae Young. This obviously wasn’t Harden at his best.

This had to be the single most competitive All-Star Game environment we’ve seen in some time. After some major issues on defense in the opening stanza and throughout the remainder of the first half, things picked up big time in the second half. Maybe the new scoring format paying homage to Kobe played a role in this.

After the third quarter was complete, the “target” score for each team was 157. Team Giannis held a nine-point lead at that time. Effort picked up. The game was ultimately tied at 152 in a fourth quarter that wasn’t timed.

When all ways said and done, the end of the game was about as crazy as it gets. Multiple offensive fouls. Some elite-level defense. Drama. A coach’s challenge. Everything you could ask for. An NBA Finals environment. This new format was something else. The intensity was also yet another way for the game’s best players to honor Kobe. What an amazing job the Association did in Chicago Sunday night and throughout the weekend.