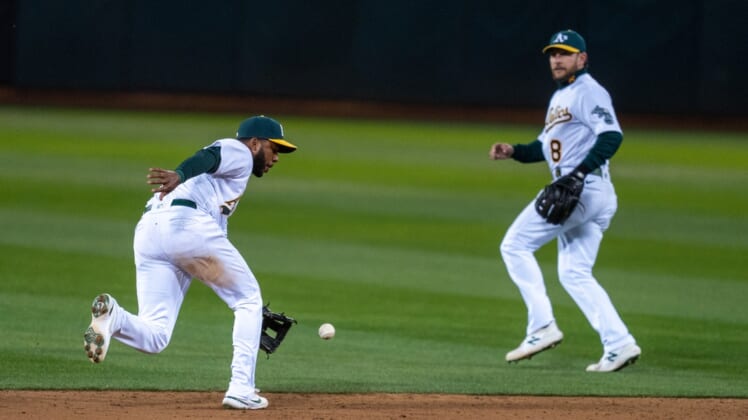 The visiting Los Angeles Dodgers will seek to continue the Oakland Athletics’ miseries Tuesday night when they send ace left-hander Clayton Kershaw to the mound in the middle game of the interleague series.

Oakland will pin its hopes of ending a five-game losing streak to start the season on the right arm of Chris Bassitt (0-1, 5.06), who had the best outing among A’s starters in their first time through the rotation.

The Dodgers wasted little time taking a hammer to the struggling A’s in the series opener Monday, scoring four times in the second inning and three more in the third before coasting home.

Dustin May was the beneficiary of all the early runs in earning his first win of the year.

The Los Angeles offense was once again led by Corey Seager, Will Smith and Zach McKinstry.

Seager increased his season RBI total to six with a bases-clearing double, his ninth hit in four games.

And McKinstry, batting ninth, added three hits and three RBIs to his remarkable start. He’s now 6-for-11 with three doubles, a home run and four RBIs.

The 33-year-old will attempt to add Oakland to the list of 23 major-league teams he has beaten in his career. He has made four previous starts against the A’s, going 0-0 despite a 1.35 ERA.

The last time he saw the A’s, it was in a 3-2 loss in Oakland in August 2018. He didn’t get a decision that day in a matchup with Oakland right-hander Mike Fiers.

Kershaw is 21-5 in interleague play, with a 1.71 ERA in three starts in Oakland.

He did see the A’s in spring training and was bombed for nine runs in 3 1/3 innings in a Cactus League game on March 26.

“I actually felt like there were some pitches that were better. It’s good to know it’s in there,” Kershaw said after the game, which came during a spring in which he went 0-2 with a 10.22 ERA. “I’ll just be thankful it’s spring training.”

Meanwhile, Oakland’s Bassitt earned the Opening Night call against Houston, in large part due to a strong spring in which he went 2-0 with a 1.74 ERA.

He left a 1-0 game in the sixth inning against the Astros, then watched reliever Yusmeiro Petit serve up a two-run double to Yordan Alvarez that scored inherited runners and put a second and third earned run on Bassitt’s record.

The A’s haven’t hit or pitched well during their losing streak, and on Monday added poor defense to the mix.

“We haven’t done anything well. Defensively we’re usually really good,” manager Bob Melvin assessed afterward. “But it goes kinda with everything else that’s been going on. It seems like everything that can go wrong has gone wrong.”