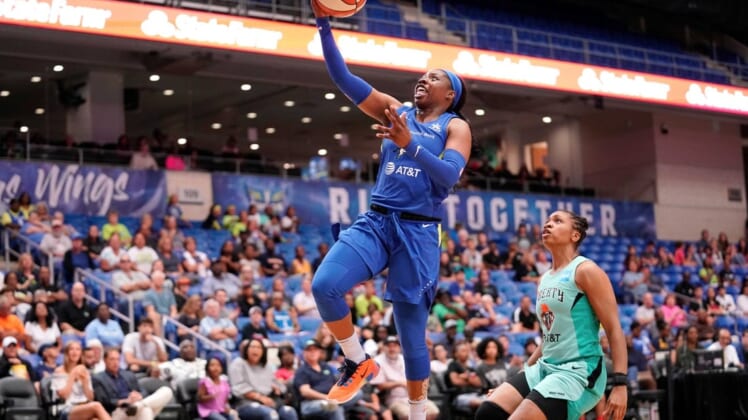 The Dallas Wings look to build on one of their most impressive wins of the season when they host the Los Angeles Sparks on Sunday afternoon in a Western Conference game in Arlington, Texas.

Sunday’s contest is the fifth straight home game for the Wings (7-8), who snapped a four-game losing streak with a 93-88 win over Phoenix on Friday. Arike Ogunbowale scored 24 points, 15 of them in the first half, and reserve Teaira McCowan added a season-high 18 points and 10 rebounds in her best game for Dallas.

“I was very proud of her,” Dallas coach Vickie Johnson said about McCowan. “She just did a great job for us. I think she’s feeling more comfortable with our team.”

Dallas led by as many as 17 points in the second quarter on Friday but Phoenix rallied to take the lead midway through the fourth. McCowan’s free throw and a long 3-pointer by Ogunbowale pushed the Wings back in front and they were strong down the stretch.

“We just stayed focused and worked through the things that didn’t go well,” said McCowan, who was acquired from Indiana to start this season. “We needed this win and we played well.”

Isabelle Harrison hit for 16 points, Marina Mabrey had 14 and Allisha Gray scored 12 for Dallas in the win, which allowed the Wings to improve to 2-5 at home this season.

The Sparks (5-8) head to the Dallas-Fort Worth Metroplex after an 89-72 loss at home to Las Vegas on June 11 and seven days off to try to adjust to the demands of interim coach Fred Williams, the former assistant who took the Los Angeles helm after Derek Fisher was fired on June 7.

“I could see [expectations] changing if we had a whole brand-new coach, but we have somebody here who’s been with the program,” Los Angeles guard Brittney Sykes said.

Canada needs to continue to be aggressive if the Sparks expect to make the playoffs.

“I just try to maintain the flow and maintain leadership on the floor and make sure everyone gets involved and everyone gets a touch,” Canada said after the loss to Las Vegas. “When the game comes to me it comes to me.”

The Sparks have dropped three of their past five games, with a 93-91 victory at home over Dallas on May 31 their most recent victory.