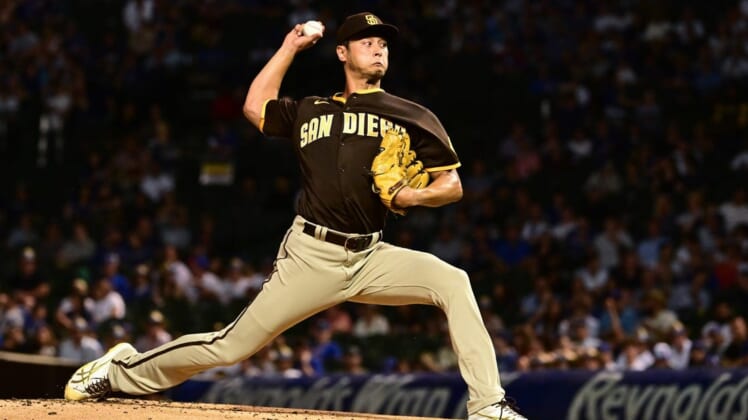 In his return to Chicago, Yu Darvish allowed one run while completing eight innings for the first time in nearly three years, and the San Diego Padres used a three-run eighth Monday night to beat the Cubs, 4-1.

Chicago has lost a season-high seven in a row.

Making his first appearance at Wrigley Field since the Cubs traded him to San Diego in December 2020 after three seasons on the North Side, Darvish (6-3) yielded Yan Gomes’ second-inning homer and four other hits while striking out seven without walk.

Darvish faced a first-and-third jam in the eighth, but fanned Ian Happ to end the Cubs threat and record his longest outing since going 8 1/3 innings for Chicago against St. Louis on Sept. 22, 2019.

Eric Hosmer, meanwhile, delivered a two-run double in the top the eighth and Jake Cronenworth had three hits for the Padres, who have won eight of 11 to move into a tie with the Los Angeles Dodgers atop the NL West. San Diego, at 38-24 is off to the franchise’s best start through 62 games, according to MLB.com

The Padres also matched a season high with a fourth straight win on the road, where they are 21-11.

Chicago starter Justin Steele completed seven innings for a second consecutive start, yielding an RBI single to Cronenworth in the third, plus five other hits while striking out three without a walk. However, the Padres got the best of Rowan Wick (1-2) in the eighth.

Jurickson Profar opened the frame with the game’s first walk and went to third on Cronenworth’s single. He then scored on Manny Machado’s RBI single to give San Diego the 2-1 edge. Hosmer’s double into the right-field scored a pair for some Padres’ insurance.

Gomes, who entered 4-of-8 versus Darvish, drove the right-hander’s pitch into the left-field bleachers to open the scoring. However, the Padres tied it at 1-1 on Cronenworth’s two-out, run-scoring single the next inning.

The Padres remained without Bob Melvin and bench coach Ryan Christenson, who are both in COVID-19 health and safety protocols. Fellow bench coach Ryan Flaherty is acting as San Diego manager.

The game started after a near 90-minute weather delay.