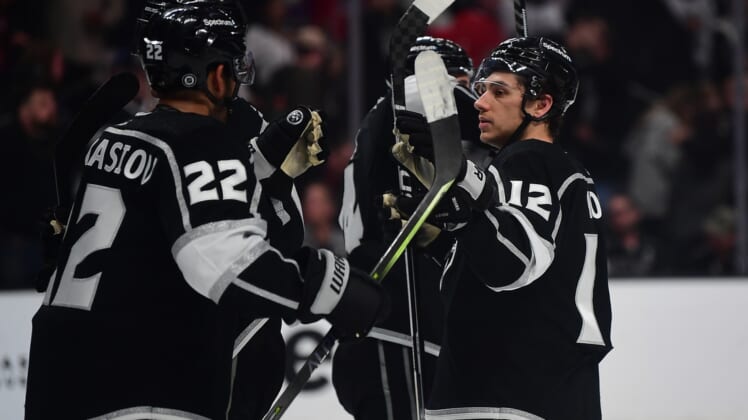 Andreas Athanasiou and Trevor Moore each scored goals 15 seconds apart in the third period as the Los Angeles Kings inched closer to their first playoff appearance in four seasons with a 4-1 victory Thursday over the visiting Chicago Blackhawks.

Phillip Danault and Anze Kopitar also scored goals, while Jonathan Quick made 15 saves for the Kings (42-27-10, 94 points), who can secure their spot in the postseason with two victories over their last three games.

Thursday’s two points came after the fourth-place Vegas Golden Knights moved within three points of the Kings with a victory Wednesday. Los Angeles also moved two points behind the second-place Edmonton Oilers, who have two games in hand on the Kings.

Patrick Kane scored a goal and Collin Delia had 31 saves for the Blackhawks (26-41-11, 63 points), who lost for the third time in their last four games. Chicago is 2-8-2 going back to March 26. The team’s last victory in regulation came March 23.

Athanasiou’s goal at 11:45 of the third period, his 10th, came after he forced a turnover near the Kings blue line and used his speed to score past Delia on the breakaway. Moore’s 16th came on a two-on-one with Viktor Arvidsson with eight minutes remaining.

The Kings took a 1-0 lead 11:58 into the opening period when Danault scored his 26th of the season on the power play. Danault found a rolling puck and fired it past Delia for his fifth goal in five games.

Los Angeles made it 2-0 at 9:16 of the second period when Kopitar won a faceoff in the Blackhawks’ zone, Alexander Edler fired a shot toward the goal from the left point and Kopitar deflected it past Delia for his 19th. Edler had two assists on his 36th birthday.

The Blackhawks pulled within a goal when Kane delivered his 26th on a power play, scoring from a sharp angle on the right side at 15:13 of the second period.

Los Angeles, the third-place team in the Pacific Division, faces the Anaheim Ducks on Saturday in its final home game of the regular season, with games at Seattle and Vancouver to follow.