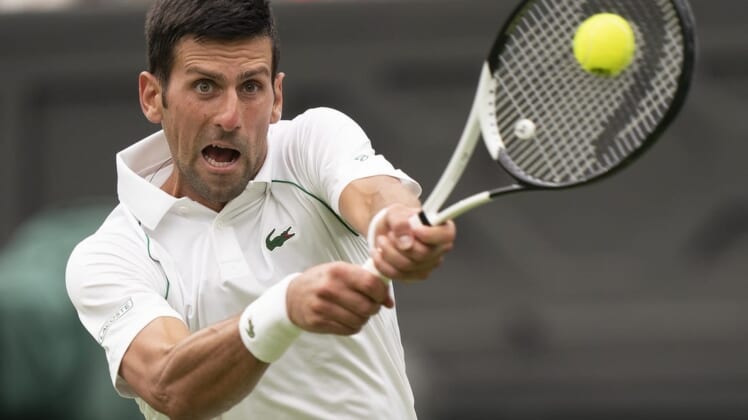 Djokovic entered the tournament as the -170 favorite at DraftKings. Matteo Berrettini owned the next-shortest odds at +550, followed by long-time rival Rafael Nadal at +750. Despite his status as the heavy favorite, Djokovic had been backed by 43 percent of the total bets on the men’s winner and 76 percent of the handle.

The story was similar at BetRivers, where Djokovic opened the tournament at -125 ahead of Berrettini at +600 and Nadal at +700. Djokovic had drawn 32.2 percent of the tickets and 58.2 percent of the handle. Nadal had been backed by the second highest share of handle (10.7 percent) and the fourth-most wagers (8.3 percent) at the sportsbook.

Djokovic began his quest for a seventh Wimbledon title by beating South Korean Soon-woo Kwon 6-3, 3-6, 6-3, 6-4 in his opening match Monday. It was the Serbian’s 22nd consecutive win at the All England Club in London.

BetRivers also reported that the biggest potential payout on the men’s side was a $1,000 wager backing Hubert Hurkacz that would pay $21,000. Hurkacz’s odds now sit at +1500.

Swiatek is similarly supported to claim the women’s title.

Serena Williams is a longshot at +1800 but the fan favorite was still being supported by 5.7 percent of the handle, third-most at the sportsbook.

Swiatek was also +150 at BetRivers, where she had drawn 55.5 percent of the tickets and 32.6 percent of the handle. Swiatek was the 2019 Wimbledon champion and entered this year’s event riding a 35-match victory streak.