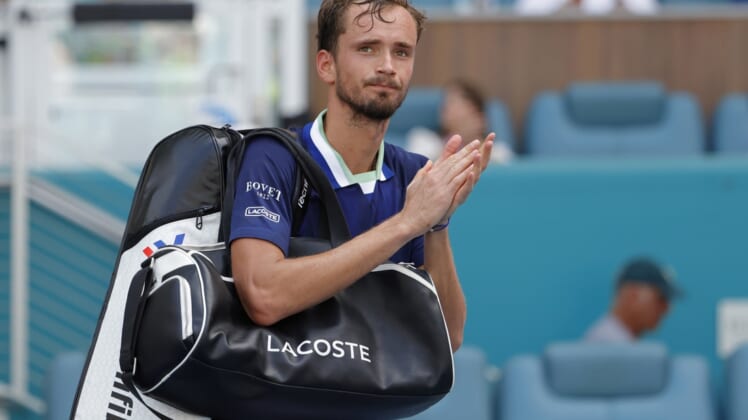 Wimbledon has banned Russian and Belarusian players from competing in the upcoming tournament as a response to the invasion of Ukraine. It’s a decision that the ATP labeled as “unfair” on Wednesday.

The All England Lawn Tennis Club, which runs Wimbledon, is the first tennis organization to refuse Russians outright. The ATP and WTA Tours and the International Tennis Federation have allowed players from Russia and its ally Belarus to continue competing, but they are barred from displaying their national flags or playing their national anthems.

In addition, Russia and Belarus have been banned for team competitions such as the Davis Cup and the Billie Jean King Cup.

“Given the profile of The Championships in the United Kingdom and around the world, it is our responsibility to play our part in the widespread efforts of Government, industry, sporting and creative institutions to limit Russia’s global influence through the strongest means possible,” the All England Club said in a statement. “In the circumstances of such unjustified and unprecedented military aggression, it would be unacceptable for the Russian regime to derive any benefits from the involvement of Russian or Belarusian players with The Championships.

“It is therefore our intention, with deep regret, to decline entries from Russian and Belarusian players to The Championships 2022.”

The ATP, however, took issue with the stance of the All England Club and lobbed a quick response on Wednesday.

“We believe that today’s unilateral decision by Wimbledon and the (Lawn Tennis Association) to exclude players from Russia and Belarus from this year’s British grass-court swing is unfair and has the potential to set a damaging precedent for the game,” the ATP said in a statement. “Discrimination based on nationality also constitutes a violation of our agreement with Wimbledon that states that player entry is based solely on ATP Rankings. Any course of action in response to this decision will now be assessed in consultation with our Board and Member councils.”

The ban affects World No. 2 men’s player Daniil Medvedev as well as World No. 8 Andrey Rublev, both of Russia. Rublev made headlines last month when he wrote “no war please” on a television camera lens after winning a match in Dubai.

Also, World No. 4 Aryna Sabalenka of Belarus would be one of many affected by the ban in the women’s tournament. She advanced to the semifinals at Wimbledon last year.

World No. 18 Victoria Azarenka also hails from Belarus, while Russians Anastasia Pavlyuchenkova (ranked No. 15), Daria Kasatkina (No. 26) and Veronika Kudermetova (No. 29) also would be impacted.

The West has responded to Russia’s invasion in other individual sports already. Russian and Belarusian runners were not allowed to enter the Boston Marathon, which took place earlier this week. Russian paralympians were removed from the Winter Paralympics shortly after the invasion began.

Wimbledon is scheduled to begin June 27.