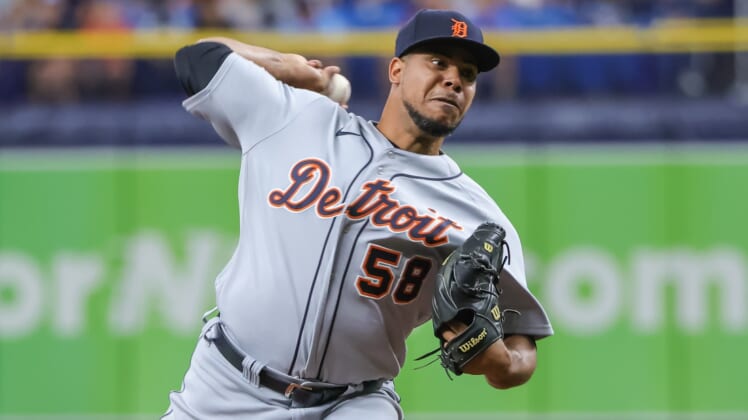 Haase hit his 22nd homer of the season and was the only Tiger to reach base twice.

Peralta (4-3) gave up three hits and walked three while striking out three. He also tossed six scoreless innings in his previous start against Milwaukee on Tuesday.

Kyle Funkhouser collected his first career save by getting the last three outs.

The Tigers (72-78) split the four-game series with the American League East Division-leading Rays (92-58) and won the season series, 4-3.

The Tigers turned double plays in each of the first two innings.

Detroit had a runner on third in the third after Harold Castro singled and advanced on a sacrifice and groundout. But McClanahan struck out Robbie Grossman to end that threat.

Haase put Detroit on the board with two out in the fourth with his 438-foot blast over the center field wall.

The Rays had runners at the corners with two out in the fifth. Peralta escaped that jam by retiring Brandon Lowe on a groundout.

In the sixth, the Tigers put runners in scoring position with two out on a Miguel Cabrera single and Jeimer Candelario double. They were left stranded as Pete Fairbanks struck out Haase.

Garneau gave Detroit a 2-0 edge in the seventh against Nick Anderson with his sixth homer.

The Rays had a runner in scoring position in the eighth but squandered the opportunity when pinch-runner Kevin Kiermaier was thrown out by Garneau trying to steal second.

Joey Wendle had a base hit against Funkhouser with two out in the ninth. Yandy Diaz then hit a long fly ball that right fielder Grossman chased down at the warning track.