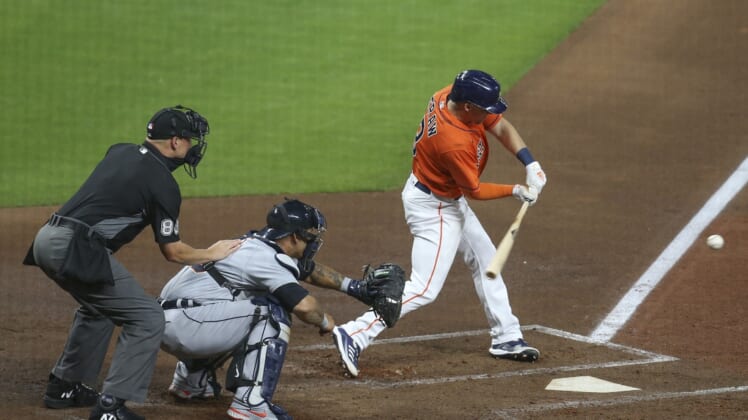 Matthew Boyd, backed by five home runs, pitched effectively into the seventh inning as the visiting Detroit Tigers claimed a series win with an 8-2 victory over the Houston Astros on Tuesday.

Detroit earned its first series victory in Houston since a four-game sweep in May 2013.

Boyd followed a sterling pitching performance from Casey Mize on Monday with one of his own, limiting the Astros to one run on six hits and one walk with four strikeouts. He departed with two outs in the seventh inning after walking Houston catcher Jason Castro, the ninth-place batter.

Over the previous four innings, Boyd (2-1) allowed two baserunners, with Jose Altuve and Yordan Alvarez reaching on two-out singles in the fifth and sixth innings, respectively.

Prior to the Altuve hit, Boyd retired 10 consecutive batters with a solid mix of four-seam fastballs, sliders and changeups, with 20 changeups yielding an average exit velocity of just 74.1 miles per hour.

Veteran right-hander Jake Odorizzi had a forgettable Astros debut, coughing up a 1-0 run lead in the third inning when he surrendered a leadoff homer to Tigers rookie center fielder Akil Baddoo, who homered for a second consecutive night and fourth time overall.

An inning later, Renato Nunez also went deep for the second time in as many games, drilling the second two-run home run of the frame off Odorizzi. Jonathan Schoop scored on the Nunez blast after his single to center followed the two-run shot of Nomar Mazara, whose second homer this season plated Jeimer Candelario.

The Tigers’ four-run frame stretched their lead to 5-1.

Odorizzi (0-1) did not escape the fourth and he allowed five runs on seven hits with four strikeouts in 3 1/3 innings. His replacement, right-hander Bryan Abreu, surrendered a two-run shot to Tigers catcher Wilson Ramos in the fifth, extending the Detroit lead to 7-1.

Ramos homered again, this time with two outs in the ninth inning off Nivaldo Rodriguez. Ramos has six homers on the season.

Houston had two runners in scoring position following a Myles Straw RBI single in the second. Boyd responded with strikeouts of Castro and Altuve to end the threat.

The Astros have lost four in a row.