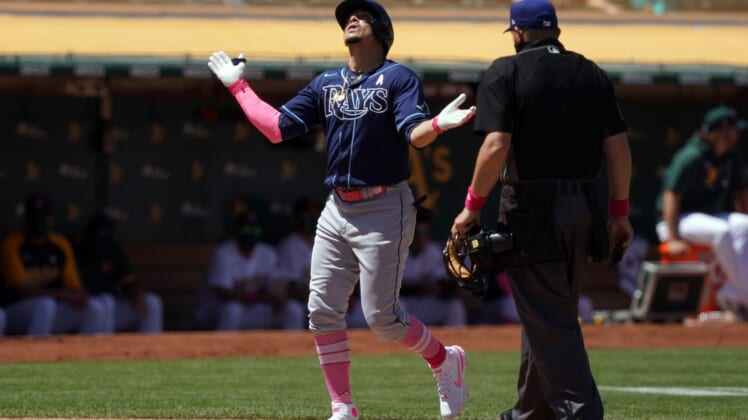 Willy Adames belted a three-run homer and Mike Brosseau delivered a go-ahead solo blast in the sixth inning as the visiting Tampa Bay Rays salvaged the finale of their three-game series against the Oakland Athletics with a 4-3 victory on Sunday.

After dropping the first two games of the series by a total of four runs, Tampa Bay rallied from an early 3-0 deficit to win for the sixth time in its past eight games.

Jeffrey Springs (3-1) pitched an inning in relief for the victory while Andrew Kittredge recorded the final five outs for his second save.

Oakland grabbed the early lead with two outs in the fourth against Shane McClanahan when Matt Chapman singled, Seth Brown walked and Stephen Piscotty singled in a run.

After Piscotty moved to second on a wild pitch, Mitch Moreland delivered a two-run single to give the Athletics a 3-0 lead.

Moreland was mired in a 2-for-20 slump before registering the hit off McClanahan, who surrendered three runs with five strikeouts over four innings.

The Rays pulled even in the fifth on Adames’ three-run homer to right field off Cole Irvin (3-4), who gave up four runs (three earned) over six innings.

Brosseau then broke the tie with two outs in the sixth by depositing Irvin’s 1-2 slider into the left field bleachers, giving the Rays their first lead of the series.

Oakland had two runners on with two outs in the eighth, but Matt Olson hesitated on a passed ball and was thrown out trying to go to third by catcher Mike Zunino to end the inning.

Chapman had three hits for Oakland, which concluded a stretch of 17 straight games without a day off. The Athletics went 9-8 over the span and have Monday off before beginning a six-game road trip against Boston and Minnesota.