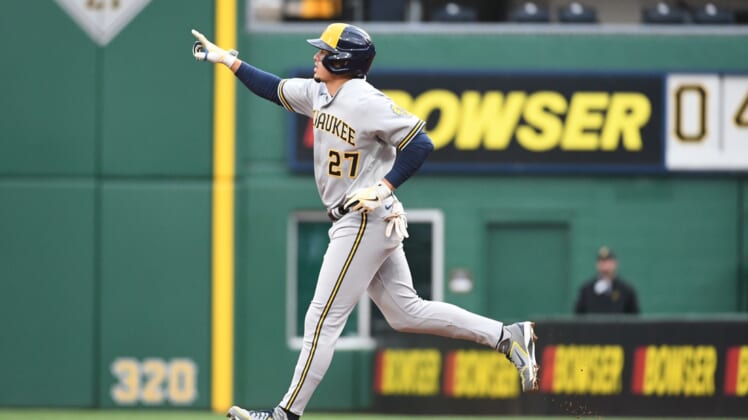 Willy Adames homered twice, doubled, singled and drove in a career-high seven runs and Kolten Wong scored three times after two singles and a walk Tuesday night as the visiting Milwaukee Brewers opened a three-game series with a 12-8 triumph over the Pittsburgh Pirates.

In the rematch of a three-game Brewers sweep last week in which neither team scored more than six runs in any game, Milwaukee used a six-run sixth inning to break a tie and win for the seventh time in its last nine games.

A one-out single by Rowdy Tellez and a RBI triple by Tyrone Taylor got the big inning rolling against Pirates reliever Aaron Fletcher (0-1).

After Omar Narvaez singled home Taylor to make it 6-4, Heath Hembree came on to strike out Lorenzo Cain for a second out.

But Jace Peterson and Wong followed with singles, the latter scoring Narvaez, before Adames capped the explosion with a three-run homer to break the game open at 10-4.

Adames also hit a two-run homer off Pirates starter Mitch Keller in the first inning and added a two-run double on Keller’s last pitch in the fifth, giving Milwaukee a 4-1 lead.

Brewers starter Brandon Woodruff couldn’t hold the lead, however, serving up doubles to Daniel Vogelbach and Ben Gamel around a walk to Ke’Bryan Hayes to open the last of the fifth.

Kevin Newman’s two-run single off reliever Brent Suter (1-0) drew the Pirates even at 4-4.

Benefitting from the six-run sixth, Suter was credited with the win after allowing just one hit in two innings.

The Pirates got within 10-7 with one in the seventh and two in the eighth. The Brewers added two in the top of the ninth to create some breathing room for closer Josh Hader, who had to be summoned to strike out Tucupita Marcano with the potential tying run on-deck.

Adames’ two-homer game was the first of his career, while the seven RBIs were three more than he’d ever recorded previously. He’d gone just 1-for-11 against the Pirates last week.

Tellez and Narvaez also had two hits for the Brewers.

Hayes went 3-for-3 and scored twice for the Pirates, who were coming off a 3-1 series win on the road against the Chicago Cubs. Vogelbach and Newman collected a pair of hits apiece.